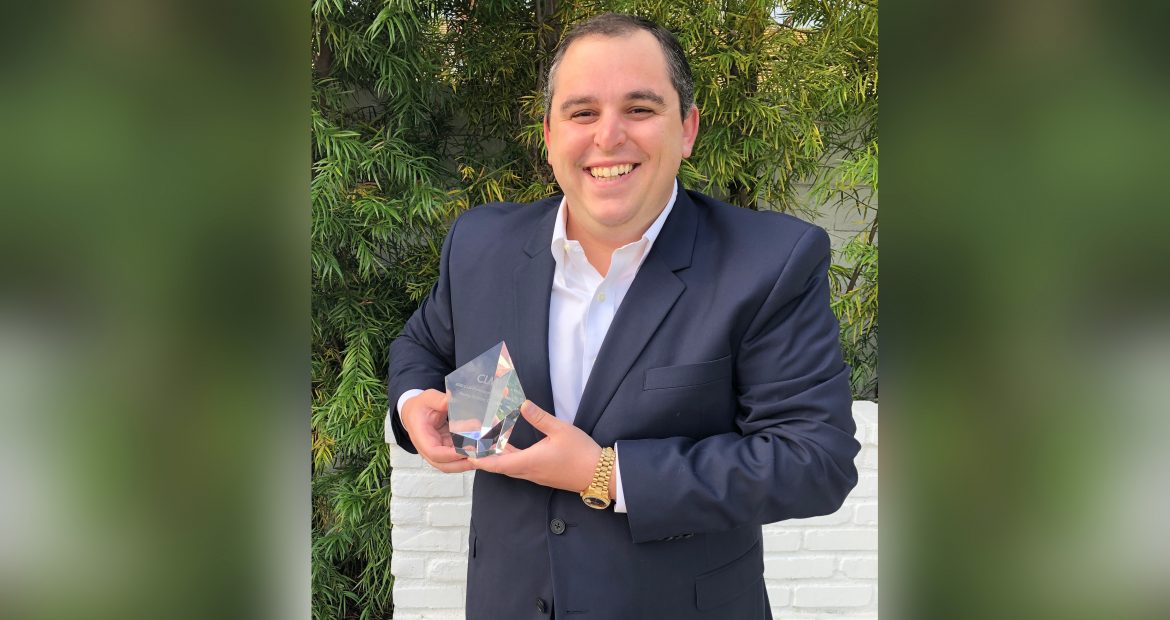 Developing strong leadership skills are an important quality to have, especially when going into the professional world. Brother Alex Chazen (UC Irvine, 2008) recently won a national award for his work as a young claims and litigation management attorney. He attributes much of his success as a young leader to the lessons he learned in AEPi.

Brother Chazen grew up in the Los Angeles suburb of Sherman Oaks. Born and bred in Southern California, he attended the University of California – Irvine, where he was a member of the Zeta Tau chapter of AEPi. He had a pretty strong Jewish identity going into college. “Before I started at UCI, my grandma told me that she would give me $20 if I went to three Hillel events the first week of school.” At Welcome Week, he went to the Hillel table and there was an AEPi Brother sitting there. When Brother Chazen asked for a schedule, the Brother gave him one and said, “there are a couple of guys I want you to meet.” There were Brothers at the next two events and the rest is history.

Encouraged by his chapter, Brother Chazen joined other Jewish organizations on campus. “My chapter placed a huge emphasis on knowing the role of the chapter in the larger community and doing our best to be leaders within that community.” He became president of Hillel and the Israel advocacy group on campus, even though UC Irvine isn’t the friendliest place to be pro-Israel. From Hillel, he gained media training for interviews with affiliates from Fox News, CNN and NBC because of the constant Israel coverage on his campus. He would go on to attend Loyola Law School in Los Angeles, which appealed to him since he could be closer to his fiancé.

Through an AEPi connection, Brother Chazen became a member of the Claims & Litigation Management Alliance (CLM) which is the leading professional organization of legal and insurance professionals in the United States. “One of the directors of Hillel in Orange County California was a Brother from Houston and helped me start at the firm that I’m at now.” CLM is the largest industry group for insurance litigation and holds conferences and local events every year. Through his hard work, he was recognized as a young leader.

Brother Chazen won the 2020 CLM Professional of the Year Award for Young Outside Counsel at the CLM Annual Conference in Dallas, Texas, which was held online due to COVID-19. “Outside counsel is someone who has worked in the industry for quite a while, who doesn’t work in an insurance company, but is an attorney who works with insurance companies,” said Brother Chazen. He received the award in the 35 and younger category.

As a licensed attorney in the states of California and Texas, Brother Chazen specializes his practice in construction claims and insurance defense. He was recently made an equity partner at the law firm of Kahana & Feld, LLP which has offices in Irvine, Oakland, Houston, Phoenix and Los Angeles. The firm has four other AEPi Brothers as partners, including founding partner and Regional Governor Jason Feld (Houston, 1995), Avi Attal (UC Berkley, 2004) and Carl Katz (UC San Diego, 1989).

Currently, Brother Chazen lives in Newport Beach with his wife Sabrina and their two children, Coco and Beau. Even as an AEPi alumnus, Brother Chazen is still very involved in his local Jewish community. He is engaged in the Orange County Jewish Community, the Jewish Federation & Family Services Solomon Society and Temple Bat Yam. He also currently serves as Secretary/Treasurer of the Orange County Bar Association Construction Section and Director of Education for the CLM Orange County Chapter.

In line with AEPi’s mission, the Zeta Tau chapter encouraged Brother Chazen to become a leader. “That’s what got me more involved at Hillel in undergrad, it’s what’s got me involved in organizations in law school and it’s what’s gotten me to be the youngest equity partner in my firm. Showing up is easy, being a leader is much more difficult.” Learning to rush and talk to new people, as well as having other leadership experiences through AEPi has helped Brother Chazen become a young leader and win this prestigious award.

“There’s no point being a member if you don’t want to be a leader.”