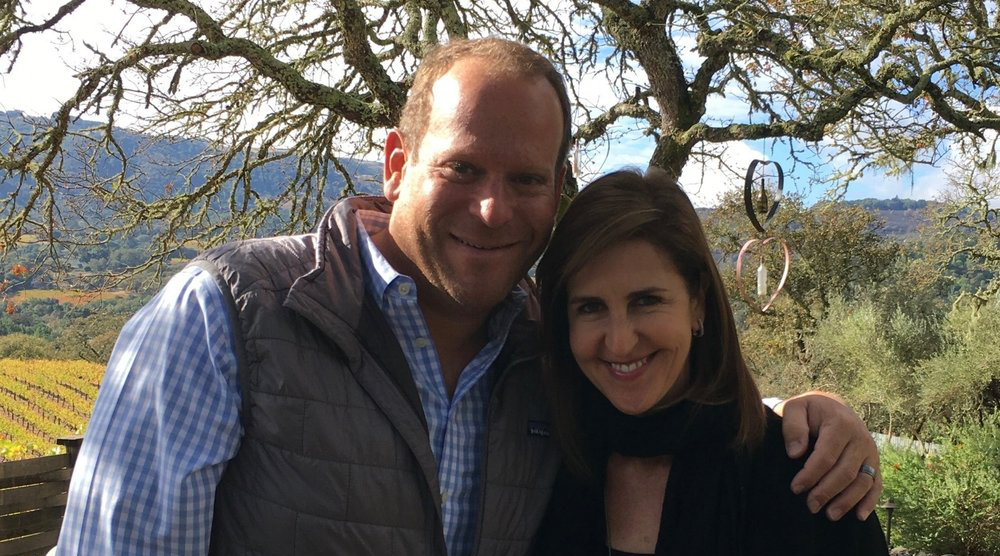 While fairly young in the winemaking business, Brother Scott Beeber (George Washington, 1993) always had a dream of carrying on the family legacy. His great-grandfather made “medicinal wine” in New York City during the prohibition era and, growing up, he remembers his family retelling stories about how he used to deliver the wine to the Rockettes in Manhattan. He listened to these tales in his grandfather’s house in awe, with bottles of spirits mixed with different fruits and spices sitting around him on the bar in the basement. With his great-grandfather’s legacy in mind, he set out to find the best fruit in California to produce the best single-vineyard wines and ultimately leave his mark in the industry. His search came to an end in 2012 when Avery Rose Vineyards was founded in Napa Valley.

“It was a perfect storm. We own the label, but we worked with Six Acre Vineyard, managed by the O’Shaughnessy Family, to produce the fruit for our first barrel. We were lucky because there was a drought going on that year, which produced low yielding fruit but a high concentration berry. This made for a sensational taste for the wine.”

After making their first test barrel of wine in 2013, they encouraged friends and family to purchase their boutique single vineyard cabernet sauvignon. They sold it all in one email, so they increased their production by one barrel per year to meet expected demand, with 100 cases of wine in 2016. “Selling 20 cases to your friends is easy, especially if it’s a good wine. Once you start producing 100 cases though, you have to have a much broader network because it’s harder to move and sell. Sometimes you have to go well beyond your comfort zone to make that sale. I’ve learned so much about packaging, shipping and licensing along the way and don’t know what I’d do without my wife.“

Brother Beeber had to make risky decisions in order to succeed, but what business doesn’t? In 2017, he lost his grapes to make the wine in the wildfires that year. Since they don’t own a vineyard of their own, they needed to find a new source for the fruit. “My wife and I took that time to put wine production on hold and work on growing the business. We wanted to focus in on our branding and get our name out there. We had a great label and story, but no one knew about us.”

In January, Avery Rose Vineyards won a gold medal at the 2020 San Francisco Chronicle Wine Competition, which is the largest competition of North American wines, for their 2016 cabernet sauvignon. More than 7,000 wines are entered per year into the competition, hundreds of those a cabernet. “Being recognized as one of the top 15-20% of wines in the category is amazing. We had a lot of conversations with companies at the competition that wanted to carry our wine.” For those who aren’t familiar with the wine business, a wine’s rating is one of the most important aspects. In the United States, ratings are on a point scale out of 100. “A former Bon Appetit rater tried our wine and rated our 2016 cabernet at 93 points, and our 2015 cabernet at 95. We were elated about this rating because anything above 90 is considered excellent, and anything above a 95 is considered worthy of collecting.”

COVID-19 has made it hard for Brother Beeber to go out and encourage new people to try their wine. “Businesses weren’t really buying it because of the pandemic. We’ve got a few restaurants and wine bars that carry our wine and now that restaurants are opening outdoor seating, we’re seeing a bit of pickup and general interest. I think one of our goals and priorities is to develop a stronger connection with the people who like our wine, so we’ve considered starting a wine club.” Brother Beeber has been offering Zoom tastings to those who order his wine online. He has it shipped to them and then does a tasting to help the customer understand the differences between the two wines he’s produced. “I even sent a note to my fraternity Brothers via Facebook, asking them to help me. Their response was a great indication of why you’d want to be a part of a group like AEPi. When posting, I didn’t expect much response but received eight orders overnight. I think I must have sold at least 20 cases to my Brothers. I’ve even done Zoom tastings with a few of them and their families. It’s nice that, even during a pandemic, I’m still making connections with my AEPi Brothers and moving forward with the business because of their help.”

“I truly believe that you need to be open to giving and receiving help. Ever since I joined AEPi, I knew that you could build friendships that are genuine and seem to last forever. Combining those friendships with the Jewish aspect of fraternity life has only made those connections stronger and shown me that I can always rely on my Brothers when I’m stuck. I’ve always got people waiting in the wings to help, and that is moving to me.”

Check out Brother Beeber’s website for more information on his wines. If you’re a Brother who’s interested in purchasing something, contact him for an AEPi discount code!