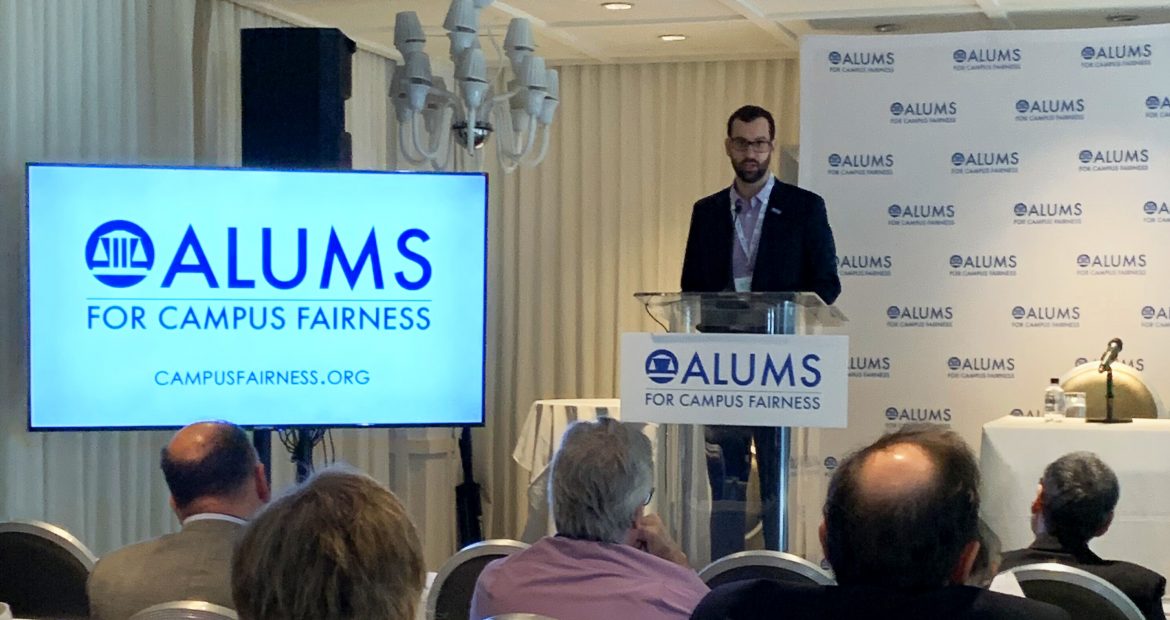 A pandemic hits the earth and all of humanity suffers. Most look for answers but others look to scapegoat.

It’s a centuries-old trope but one that is shockingly relevant today.

Even during – or, perhaps because of – the current COVID-19 pandemic, anti-Semitic acts and activity is ramping up around the world. And, it’s not being felt any more strongly than on college campuses.

Brothers Avi Gordon (Binghamton, 2010) and Joel Bond (SDSU, 2015) have dedicated their professional lives to organizing college alumni to fight anti-Semitism at their alma maters through Alums for Campus Fairness (www.campusfairness.org).

“AEPi wasn’t at Binghamton when I was an undergraduate, so I didn’t have a chance to become a Brother as an undergraduate,” said Brother Gordon. “But, after college, I was working with Stand With Us and started speaking at AEPi conclaves and I knew that these were my Brothers. I was initiated at the 2012 conclave at University of Kansas. I also met my future wife there (she was a consultant for Sigma Delta Tau at the time) so it was a big conclave for me.”

“When I went to my first international convention in 2012, I saw the dedication of the staff and undergraduates. I found it to be contagious. I wanted to help and become a part of developing Jewish leadership, so I have made AEPi a part of my Jewish and professional commitment ever since,” said Gordon. “I had the chance to work for AEPi from 2014 – 2016 as the director of leadership development and then director of Israel engagement. I had a chance to really make a difference on campuses and in our fraternity. It remains one of my best professional experiences.”

Brother Bond came to AEPi in a more direct manner, but his commitment is strikingly similar. “I was adopted by a Black Christian family and raised in that environment. My mom was a deacon at our church, and we went to church regularly. When I was in seventh grade, I found out that my birth mother was Jewish and that opened my eyes to my heritage. I went to Jewish Day School for High School so when I got to SDSU, AEPi was a natural fit for me.”

After spending most of his college career in leadership positions at the Sigma Delta chapter (“I did almost every office that wasn’t on e-board including sentinel, risk manager and Jewish identity chair”) and working in student government politics, Brother Bond began his professional career as a Springboard Fellow at Hillel at Long Beach State. While there, he helped restart the Chi Beta chapter and fight BDS on campus. After managing a California Assembly race, he began working with Brother Gordon at Alums for Campus Fairness as associate director.

“Alums for Campus Fairness is the unified alumni voice that counters bigotry on campus. We have about 40 chapters across the country with over 7,500 members. We help counter campus-based anti-Semitism and anti-Israel rhetoric by coordinating the alumni voice under one roof and working with organizations like AEPi and Hillel to fight bias on campus,” said Gordon.

“Anti-Semitism is an evolving threat on campus, especially in the age of COVID. When students are on campus, Jewish students had to deal with your traditional verbal and sometimes physical assaults and vandalism,” said Bond. “Today, their anti-Semitic actions include zoom bombing and launching online anti-Semitic blood libel campaigns. It’s more challenging in the online world. Votes are taking place in student government and no one knows about it. Faculty are being hired who have anti-Zionist backgrounds and no one knows about it.”

“The pandemic has forced campus anti-Semitism online and once students come back to campus – whenever that is – that activity will stay online as well as be in-person. We know that anti-Semitism isn’t going away.”

Both Brothers credit their AEPi experiences and Brothers with their current professional and personal success.

“Even during a pandemic, we use our network of AEPi Brothers. Earlier this year, during quarantine, there was a bad incident at Florida State. ACF worked with AEPi alumni to springboard a petition and force the university to develop a task force to investigate the current climate for FSU Jewish students. We got that done because of AEPi,” said Gordon.

“Alums for Campus Fairness wouldn’t exist without AEPi. We’re AEPi alumni. We live and breathe AEPi. My closest friend is an AEPi and at every turn, AEPi helped me get my next professional opportunity. I use the lessons I learned in AEPi at AEPi conferences every day,” said Brother Bond.

On Thursday, August 13 at 12:00 PM EDT, Brother Gordon will join with Brother Jacob Baime (Brandeis, 2008), the executive director of the Israel on Campus Coalition on an AEPiConnect webinar, Examining the Campus Climate. Join with them to discuss the climate regarding Israel advocacy on campus and the best ways for you to engage as an alumnus and help at your alma mater. Click here to register.