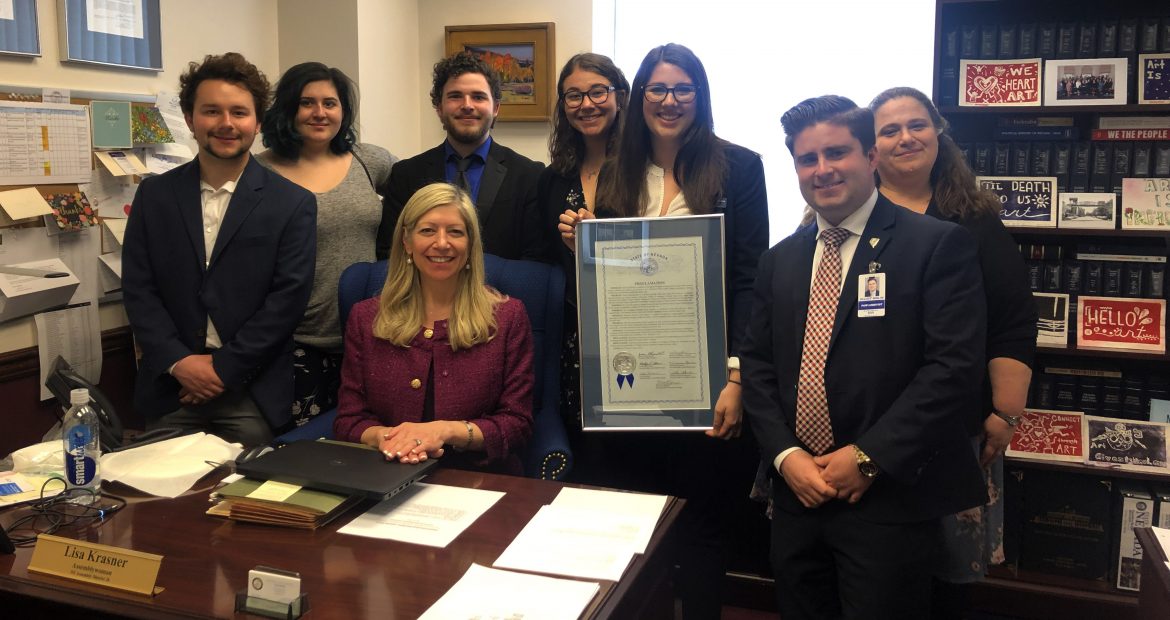 AEPi Brothers are leaders. As founding father of the Upsilon Nu Chapter at the University of Nevada – Reno, a founding member of Hillel on campus, and a continuous advocate for Jewish causes, Brother Elliot Malin (Nevada-Reno, 2014) is no exception.

Growing up in Las Vegas, Brother Malin was often “the only Jew” in his community. His involvement in the Jewish community began on a 2009 March of the Living trip, which is an educational trip that allows students to visit Poland to learn about the Holocaust and concentration camps. “It had a big impact on me,” he said. “After March of the Living I got involved in BBYO, and then through BBYO I discovered AEPi.”

As a founding father and master of the Upsilon Nu Chapter of AEPi, Brother Malin got his first taste of the challenges of leadership. “I was master for three years,” Malin said. While he wouldn’t recommend it for everyone, he believes that his experience leading the chapter helped define his college experience. “It threw me into wanting to learn more about being a leader,” he said.

After graduating, he stayed involved with AEPi as a volunteer, and ultimately became Regional Governor of Nevada, an experience he says projected him into Jewish leadership as a whole. “I was already a chapter advisor, so it was a natural thing,” he said.

“When I first moved to Reno for college, there was no Jewish life on campus, at all. That’s why we brought AEPi to Reno’s campus, and why I founded Hillel on campus as well. I don’t know if I got to fully enjoy all aspects of college, but it was worth it. We now have AEPi, Hillel, and SAEPi on campus. We’re seeing a growth in the Jewish community at the University of Nevada, and that’s why the founding fathers started the chapter in the first place.”

Becoming involved in the Jewish community throughout the state of Nevada as a whole was a natural transition for Brother Malin. He currently works as a political consultant and uses his platform to advocate for Jewish causes and combat anti-Semitism. This includes pushing for an anti-BDS bill and funding for a Holocaust museum in Nevada’s state government, as well as encouraging Jewish students to attend legislative sessions. “In this next session we’re looking at bringing in a task force to the state government, to combat anti-Semitism and bigotry,” he said. “A lot of my involvement has been because of AEPi getting me involved in the greater Jewish community.”

Brother Malin’s hard work in the Nevada Jewish community has not gone unnoticed. He was recently awarded David L. Simon Young Jewish Leader of the Year Award from the Jewish Federation of Nevada. Awarded to Jewish leaders between the ages of 26 and 40, Brother Malin was chosen for his contributions to the Jewish community. He continues his work by motivating undergraduate Brothers to be active participants in the fight against anti-Semitism. “AEPi brings the best tools and the most relevant partners to combat anti-Semitism on our campuses,” he said.

“When I was an undergraduate, we would always have a menorah or an Israeli flag at the chapter house. Just something to say ‘we’re Jewish,’ and that’s because we wanted other Jewish students to feel safe. If there was another Jew at another fraternity, we wanted them to know they had somewhere to go if there was something like an anti-Semitic act.”

Brother Malin encourages all Brothers—especially recent graduates—to stay involved in the fraternity. “It’s a great way to give back and make sure others have those opportunities,” he said. “If you’re looking to get involved, attend conclaves and conventions. It’s a great opportunity to be seen and get appointed to a position. The most important thing you can do is to be present.”