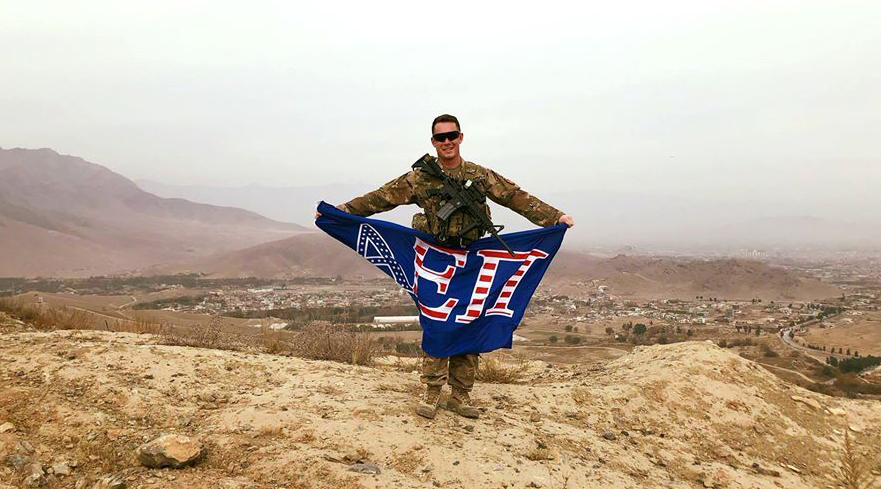 Leadership, the old saying goes, is not a position or a title, it is action and example. Brother Matthew Golden (Lehigh, 2014) has always been more than just a leader; he’s been an example of leadership.

“I grew up in Westchester County (NY) and, even in high school, was always looking for leadership opportunities. I always wanted to be that ‘Go-To’ guy. I loved the idea of being in the Army and seriously considered West Point after High School. I ultimately attended Lehigh University where I was awarded an ROTC scholarship. Lehigh offered a strong balance between athletics, academics, and overall student involvement. This allowed me to study engineering, train with the ROTC program, and offered me an opportunity to participate in athletics “said Brother Golden.

Although the Sigma Eta chapter was not recognized by the university administration at the time, it was recognized by AEPi International and the Brothers began actively rushing Matt. “I went to a Hillel event at orientation – mostly because they promised us they’d have deli foods there – and consequently met some of the AEPi Brothers. From the outset, they were nice and offered to help me with my classes and getting around campus. From that moment, I was in touch with AEPi, but I didn’t think I’d be able to join because I was so focused on my academics and ROTC. I also wanted to play club soccer so I couldn’t figure out where AEPi would fit in.”

But the chapter persisted, and Matt ended up pledging and initiating later that year. In his Junior year, then Supreme Master Elan Carr (UC Berkeley, 1990) came to visit the chapter and the two connected. “Elan had served in the military in the JAG corps and we developed a strong connection and friendship. He encouraged me to become Master of my chapter and use that experience to refine my leadership qualities. I had the honor of being Master at the Centennial convention, all because of that connection I made with Elan.”

“I grew up Jewish but was pretty secular. Being Jewish was always a part of my life, though. Joining AEPi and being involved with Hillel and Chabad at Lehigh amplifies my inner Jew. My Brothers and I had a different level of connection because of this deeper connection we had. I really felt it when I went on Birthright with my pledge Brother. In the end, I felt more pride in my Jewishness because of my AEPi experiences,” he said.

After graduation, Brother Golden decided to join the active-duty Army and would serve as an Engineer Platoon Leader and Company Executive Officer within the 25th Infantry Division in Hawaii. Subsequently, he would go on to serve in the South Atlantic Division of the U.S. Army Corps of Engineers, in Atlanta, Georgia, where he was a part of the national response to Hurricanes Irma and Maria. Becoming involved in federal disaster response, he deployed to Puerto Rico and the Virgin Island for nearly two months to support FEMA. The U.S. Army Corps of Engineers supports FEMA by coordinating and organizing public works to help the residents with everything from debris removal to setting up the power grid. This proved to be an important harbinger for his current role.

After serving seven months in Afghanistan overseeing a multi-million-dollar construction program, Brother Golden was promoted to Captain and sent back to the US late last year to attend the Engineer Captain’s Career Course in Fort Leonard Wood, MO. While in Missouri, Brother Golden was able to pursue his master’s degree in Engineering Management at the University of Missouri S&T where he met the Brothers of the Nu Deuteron chapter as he walked across campus. “They were kind of surprised to meet a Brother in that setting and it was great to meet them,” he said.

After getting an assignment to head to Germany to help lead a construction battalion there, he returned home to Westchester for some time with family before shipping out. And, then the COVID crisis hit. “I was two days away from shipping out to Germany when I got a call for a temporary assignment to assist with the COVID-19 response in the Baltimore District of the U.S. Army Corps of Engineers (which encompasses parts of Maryland, Pennsylvania, New York and the National Capital Region).”

Since then, Brother Golden has been instrumental in the Army Corps of Engineer’s response to the crisis in the D.C. area. He’s been working in the District’s emergency operations center, helping to facilitate data management and information flow, and assisting in the orchestration and building out of the Walter E. Washington Convention Center in D.C. to serve as an alternate care facility with nearly 450 additional beds (with nearly half of them capable of supplying oxygen) for patients. “It has been absolutely incredible to see how the Federal Government has responded and executed this so quickly. The amount of cooperation shown by so many other agencies and departments has been tremendous.”

“As of now, I still plan to depart for Germany later this month to serve in a battalion staff position and eventually take company command but having had the opportunity to help us respond to this crisis has been very rewarding,” said Brother Golden.

“At every point in my career, my Brothers have been a part of my life. If I’m home, we get together. When I’m away, they reach out to let me know that they’re thinking of me,” said Brother Golden. “When I was deployed in Afghanistan, the Brothers sent me an AEPi flag and a card signed by all of the undergraduates, in return, I sent the chapter an American flag which flew over the Special Operations Joint Task Force Headquarters in Afghanistan on AEPi’s Founders Day. Late fall, I finally made it back to Lehigh for the first time since I had graduated in 2014 and I went to the chapter house – it seemed so unattainable when I was an undergrad that our chapter would get university recognition and have a house on the hill – and there on the wall was the flag I sent, framed with the certificate and a picture of me with my AEPi flag. I was so moved. I didn’t really know the undergraduates, but they knew me.”

“No matter how often I fall off the map and out of touch, the Brothers of AEPi are always there for me and I value that.”

Thank you for your service, Brother Golden!
#ProudtobeaPi

« Voices: Now is the Time To Be Our Brothers’ Keepers
FridayPiday: Max Frischman (Virginia Tech, 2015) »