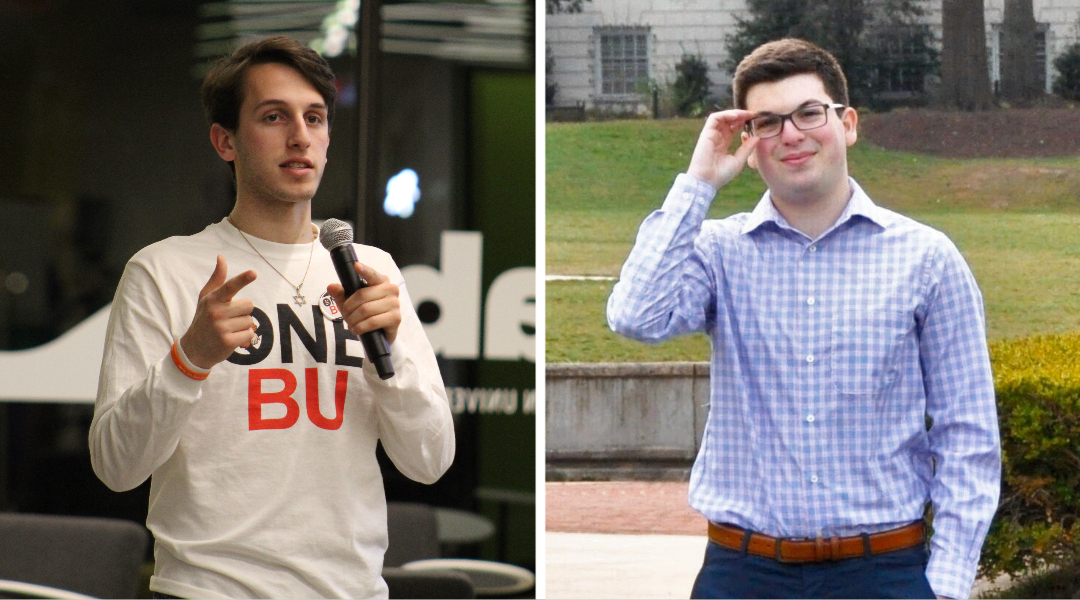 It’s hard enough to run and win an election for student body president on large, diverse campuses like the University of Maryland and Boston University but doing it during a pandemic, when all of your fellow students are off-campus and mostly at home, is especially daunting. But, this week’s #FridayPiday features two Brothers who have done just that.

Brother Oliver Pour (Boston, 2022) (above, left) and Brother Dan Alpert (Maryland, 2021) (above, right) recently won elections during a campaign season unlike any other. “I only slept like an hour or two a night for the seven days leading up to the election. I couldn’t go anywhere – no one could – so we just kept reaching out to students through every social media channel possible and made sure they knew about the election and who we were and how to vote,” said Brother Pour. His counterpart agreed. “We reached out through social media around the clock and worked to get endorsements from student groups and made sure they knew what we stand for. We couldn’t do the things we would normally do in a campaign like hang out on campus and table,” said Brother Alpert.

At Boston University, the campaign was made even more daunting because of its competitiveness. This year there were five complete slates vying for officer positions. Brother Alpert also faced a competitive election at Maryland despite the pandemic.

Both Brothers Pour and Alpert credit their Alpha Epsilon Pi chapters for a big part of not just their election success but also for helping them develop their leadership skills early on. “Our campaign couldn’t officially begin until April 15th and at midnight that night I received a call from my chapter Master that my AEPi chapter (Delta Deuteron) would be our first endorsement,” said Alpert. “Working through AEPi and with my experience serving as IFC vice president last year, we were able to get a lot of the campus Greek life behind our ticket.” Brother Alpert isn’t new to leadership. Last year, the Mayor of College Park appointed him to be the student liaison to the City Council. He has also served as the student fees coordinator on campus and in several other roles in student government.

“I rushed AEPi my first semester (at Boston University) and got involved there and in Tamid right away. I started as a Senator in student government and then was president of the college of general studies,” said Brother Pour. “I knew I wanted to be student body president, but it was my AEPi chapter Brothers and my friends at Hillel and Tamid who really encouraged me to run. I’m really proud of the fact that I’m the first Jewish student body president at Boston University.”

The uncertain future for college campuses certainly weighs heavily for both Brothers. “Maryland is making a decision by June 15 about its plans for next Fall but we’re working to make sure that student government keeps going and talking to administrators so that whatever decisions are made, they are the right outcomes for the student body,” said Brother Alpert. “I think we all know that coming back to campus will be a difficult decision both in terms of health and mental health. Coming back to these heavily populated areas will be difficult so we need to make sure that the students’ best interests are being represented. Brother Pour concurred. “Life is going to go on whether we are in our homes or in our classrooms. Student government doesn’t stop.”

In addition to crediting their fraternity Brothers with supporting them during their (virtual) campaigns, both Brothers Alpert and Pour believe their AEPi experiences have been formative during their time on campus.

“Last semester we were doing a big philanthropy project – we raised more than $4,000 for philanthropy holding a cruise on the Charles River with more than 145 people – and I can remember being on that boat with everyone and looking around and just soaking it in and thinking about celebrating good times with my Brothers,” said Brother Pour.

“No matter where you are, your AEPi Brothers are connected with you. A lot of my pledge class went abroad this semester, so right before that we all had dinner and it hit me that no matter how far apart we are on campus or in the world, they are there for me. AEPi’s support for me in this election meant a lot to me,” Brother Alpert.