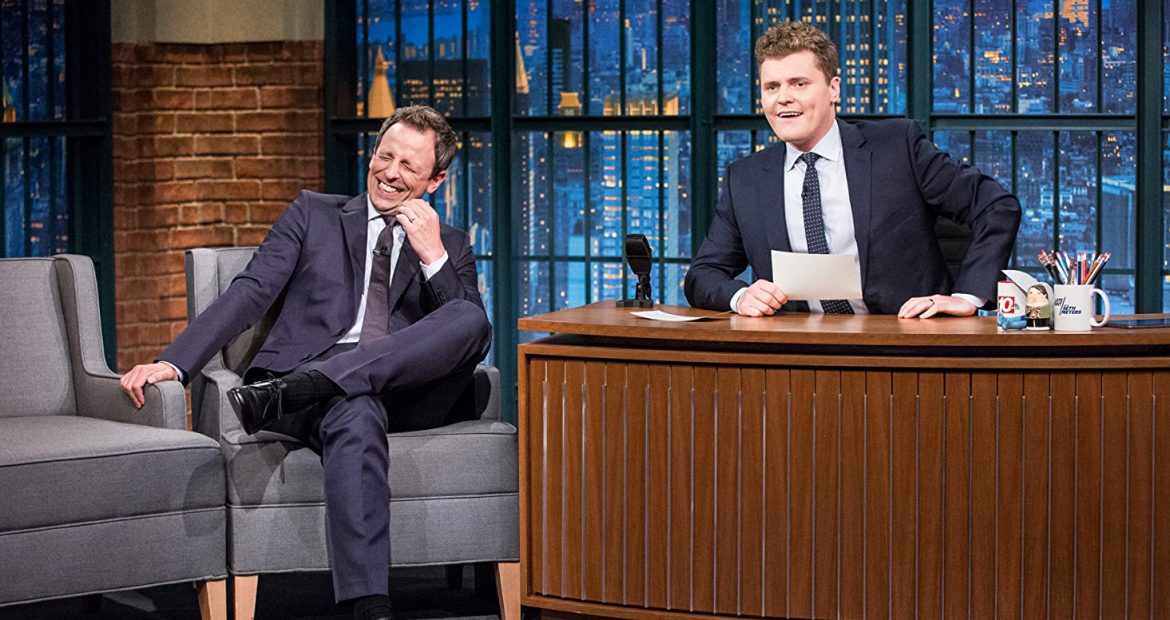 It’s a dog eat dog world in the entertainment industry. Every day, thousands of people vie for their dream role—or any role—in the next big movie or TV show. For some, fame comes naturally; for others, it takes years of practice, hard work and luck. Though seemingly small at the time, Brother Ben Warheit (Delaware, 2009)’s “big” break came in 2012 when his web series was bought by Above Average Productions. This led him to an introduction to Seth Meyers, which ultimately landed him a writer role for the Late Night with Seth Meyers show in 2014.

“My revelation to be in the industry didn’t come until much later. After I graduated from Delaware, I tried to get into comedy in New York. My only goal was to do what I loved, I wasn’t worried about success or a career path. At 26, I told myself I would give it my all until I was 30 and then reassess if things didn’t work out. Later that year, I started getting work and the rest is history.”

Above Average is a branch of Broadway Video, one of Late Night’s production companies. They found his collection of cartoon drawings on post-it notes that he was sharing daily to his Tumblr blog and ordered an animated web series, called Waco Valley, based on them. “After I made the web series, I worked with my agent to pitch it to major networks. I sold it to Comedy Central, who ordered a half-hour TV pilot of the series. It was cool to make the show, but little did I know how few pilots move forward as a TV series.” His pilot script ended up in front of Seth Meyers, who was looking for writers for his Hulu series, The Awesomes. “Seth called and wanted to hire me to write and direct for the show. Not too soon after, he was selected as the host of Late Night, and took me with him.”

Things were moving quickly at this point for Brother Warheit. It took a lot of time and patience to get to this point. He’d come a long way from doing small shows in college. “I was really into improvisation. A lot of the time, my AEPi Brothers would come to my shows. Having that support was great. I was the chapter Scribe, so I used the Brotherhood as a good audience to write jokes in the minutes. As founding fathers of Rho Deuteron, we were all close.”

Brother Warheit is now a sketch writer for Late Night. He’s been with Seth Meyers for six years and helped produce almost 1,000 shows. “I’ve gotten to meet some of my heroes and work with them over the years. I did a sketch with Steve Martin and Andy Samberg; performing with them is unreal and I could have never imagined doing this back in the day. I don’t know if I have a favorite episode, but my first week of shows always stick out to me in my career. In that first week, everything was so fresh, fast and cool. Our first guests were Joe Biden and Amy Poehler, and we had Kanye on our second day.” Writing the sketch is only part of the project. He has to work closely with other departments to bring everything to life. “It takes about 100 people to put it together. My best sketches and ideas come in the eleventh hour when I’m home late at night. I don’t write well in our writers’ room.”

Writing isn’t all Brother Warheit can do, he’s also a talented actor and has appeared on screen in works like “A Rainy Day in New York” with Timothée Chalamet, Amazon’s “The Marvelous Mrs. Maisel,” and most recently “Joker.” “I’ve always loved performing; I’d say it was likely my first love. Joker was my favorite experience because it was so interesting. We packed in a lot of intense learning in a three-day period. I worked really hard to prepare for that role. Joaquin Phoenix was very encouraging, and I learned a lot from him in the short time we filmed together.” “Joker” has gone on to become the highest grossing R rated film of all time. Brother Warheit’s scene in the movie is critical to the protagonist’s character development.

While he can’t predict what will happen in the entertainment industry, Brother Warheit believes he has made a lot of his own luck. “You’ve got to work hard and try new avenues. Nothing ever happens the way you think it will. Success isn’t linear. Just because I was in a big movie like Joker, doesn’t mean I’m guaranteed a bigger and better role next time.”

“At the end of the day, there are tens of thousands who want jobs like I do and it’s very competitive. There are a lot of people I encounter with the same dream as me, but you have to be really interested and passionate to go far. I know that doesn’t sound merciful, but it’s the truth about my line of work. I want to keep trying to perform more and hope that my career benefits from new opportunities. I don’t know what’s next, but until my next big project, the pressure will build and push me to look forward to the next big thing.”

Check out our binge list to see other movies and TV shows that AEPi Brothers have been involved in.

For ways to connect and engage while studying or working from home, visit AEPiConnect .