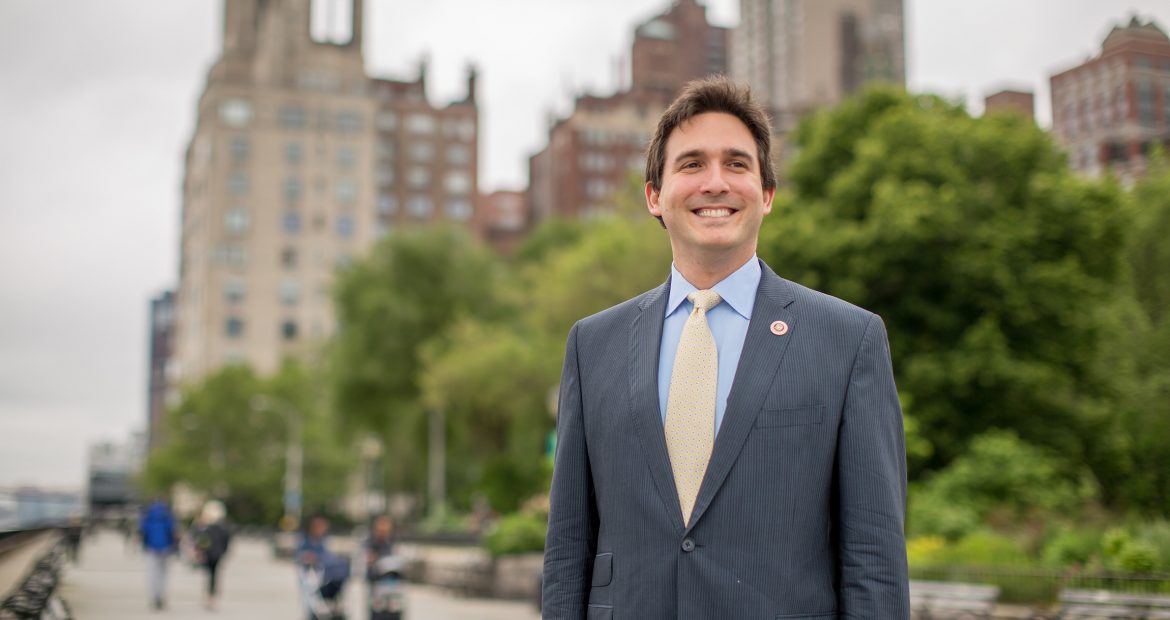 Editor’s Note: This interview and article was written several weeks ago, before the outbreak of Coronavirus in the United States. Brother Kallos is currently working around the clock on behalf of his constituents and the residents of New York City. We wanted to present this article to continue to highlight the successes of AEPi alumni in our communities and to provide just a little non-pandemic news.

Brother Ben Kallos (Albany, 2002) loves New York City. He’s lived there his whole life and has a keen appreciation of the limitless opportunities the Big Apple has to offer. It’s this deep love for his city that motivated him to run for city council.

Through his experiences in the legal profession, Brother Kallos worked on labor law disputes. He worked on the Delphi Automotive bankruptcy—the largest automobile bankruptcy at the time—as well as health law litigation. From 2010 to 2013, he worked with activist and businessman Bill Samuels to crack down on corrupt politicians. His experiences of working for regular citizens and standing up to corruption paved his way to getting elected to New York’s City Council in 2013.

Through his work as a council member, Brother Kallos embodies leadership to the core. He felt that in the past, the local government simply did not place the people’s best interest at the forefront. He noticed a lot of corruption, that it was too easy for real estate developers to gentrify communities. He saw excessive greed and, most of all, he knew that there was an opportunity to do something about it. Now, he fights for the interest of all people.

“For me, it’s always been about reform and anti-corruption,” he said. “When I got elected I had a lot of concerns about corruption in New York City government and the thing I’m most proud of is I made sure that the city council for New York was actually a full time job, so people couldn’t get paid on the side by people with interests before the city. I wrote the new campaign finance system for New York City so people can get elected without special interest money.”

Brother Kallos intuitively blends his love of his city with his passion for the Jewish community. Growing up in New York City, he was surrounded by Jewish culture. However, Brother Kallos was also aware of intolerance towards the Jewish people. His grandfather fled Europe during World War II to escape anti-Semitism and the Holocaust. “Given the fact that parts of my family died in the Holocaust and during Kristallnacht, I think [my grandfather’s story] has been core to my Jewish identity,” he said. In the wake of rising anti-Semitism in the United States and New York, Brother Kallos is constantly working to do more to fight back. He recently participated in a march of more than 50,000 people to stand up against anti-Semitic attacks and confrontations. He is constantly working to keep New York City united, rather than divided.

Like many Brothers, Brother Kallos credits his leadership ability in no small part to what he learned at AEPi. As a Founding Father of the Alpha Nu chapter at the University at Albany, he was deeply focused on creating a chapter that was focused on Jewish issues, Israel issues and Jewish identity. “In essence what we offered was a values-based organization,” he said.

“One of the most useful skills that I use to this day is how to rush, which they teach at conclave. These are skills I use to this day, and it even got me elected. The ability to knock on a stranger’s door and convince them to join your organization is the same skill you need whether you’re running for city council or President of the United States of America.”

In the future, Brother Kallos wants to run for Manhattan Borough President to be able to affect change on an even greater scale. He believes that politics must always be about helping people and that it’s important to want to talk to people, understand their needs and make choices to improve everyone’s lives. For potential candidates, he recommends interning in political offices or volunteering on campaigns to make sure it’s the right fit. Brother Kallos believes all people have to opportunity to find and pursue their passions, whatever they may be: “Life is precious; don’t waste it working in a dead end job, or a job you hate,” he says. “If you have a job you love you’re going to work even harder and put in 18-hour days but you’re going to love it, and it won’t even feel like working.”