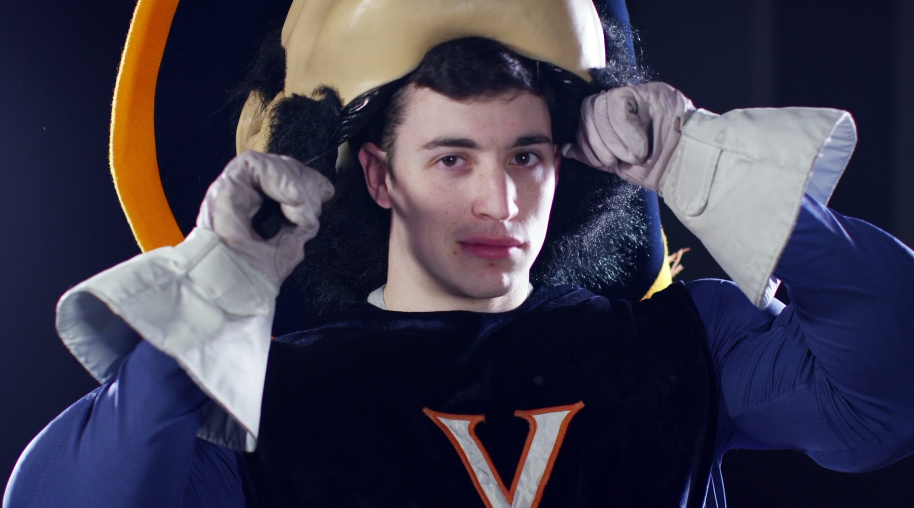 In preparation for Mensch Madness, AEPi’s philanthropic twist on March Madness, we’re going to feature Brothers with a connection to college basketball — something close to the heart of Founder Charles C. Moskowitz. Register your Mensch Madness bracket before Thursday, March 19!

Brother Truman Brody-Boyd (Virginia, 2019) had a sports secret he was keeping for years. During most sport outings, while his friends and fellow fans were cheering on the team or heading to a tailgate; Brother Brody-Boyd would say he was busy working “behind the scenes” with the athletic department. What he didn’t tell you was that he was quietly working as the UVA mascot. That’s right, he was Cavman!

“Being the mascot is a complete secret. Plenty of people had their suspicions, but you don’t reveal yourself until the end of college. It’s common practice to keep the identity of the mascot unknown so that you don’t compromise yourself as a performer. Distracting yourself could ruin the experience for a little kid who came just to see Cavman.”

Brother Brody-Boyd grew up loving sports, but basketball was never really appealing to him. His first experience as a mascot came before college, when he got in the suit as the Lafayette High School Ram. “I loved being a part of sports in my community. Even though I didn’t love basketball, I grew to love the UVA basketball program through my time as mascot.”

So how does one even become a mascot for their team? “At the end of my freshman year, I was talking to a friend who was on the cheerleading team for UVA and made mention that I was mascot for my high school. She told me I should try for Cavman and the rest is history. I was lucky to get a spot.”

Once you become the mascot, you stay with the suit until you graduate. You work football and basketball games and make appearances at other sporting events throughout the year. “Some of my favorite events to work were weddings, birthday parties and making hospital visits. There was a team of five of us who rotated wearing the suit. We had team meetings every week to figure out who would staff games and events several weeks in advance.” Brother Brody-Boyd was team captain of the mascots his third and fourth year in school. His job was to help decide who would work what. “For football games, someone would wear it for the pregame tailgating, then someone else would wear it for the first half and swap out with another for the second half. The five of us always had each other’s back and were almost like a brotherhood in a sort of way. Anonymity makes it difficult, but we always supported one another like a team.”

While he kept his secret until the end, Brother Brody-Boyd feels some of the guys had their hunch he was doing more than just working for the athletic department. “I feel like two people in the chapter may have known. I’ll never forget the mini reveal I did to my pledge class. It was right before my last home game as mascot and I told them I was Cavman for the last three years, but that they couldn’t tell anybody else. I only told them because I wanted to see them at my last game and be a part of it with me. AEPi gave me a strong Jewish community at UVA that I felt I could always come back to and be a part of, plus some of my closest friends were in AEPi so I didn’t want them to miss this.”

Of all sports, Brother Brody-Boyd’s favorite to work was men’s basketball. “The atmosphere in John Paul Jones Arena is unreal and always made it fun. Being one of the better teams last year, we had some cool high-profile matchups that I got to attend. It made the Cavman experience special. It’s hard to not say that the Final Four was easily one of my highlights in the suit. The NCAA National Championship was an electric experience that I will never forget.”

Now working at Boston University Hillel, he looks forward to March Madness outside of the suit. “One thing I was never allowed to do as mascot was put money down on a bracket. I could do it for fun, but never money. This year, my money’s on Oregon. Their team works well together, and the guys have been playing together for a few years, so the team chemistry is there. I know that helped us last year. I’m going to give a shout out to Boston AEPi and hope they take home AEPi’s #MenschMadness trophy, because why not? Best of luck!”

“Pumping up the crowds on a large scale is only part of the job. Connecting with individuals and having a one-on-one experience with someone made this all worth it. There’s nothing better than being able to brighten someone’s day, excite a fan or engage the community. I’m more than thankful for the opportunities Cavman gave me.”