Voices: How I Turned My Back on Hate 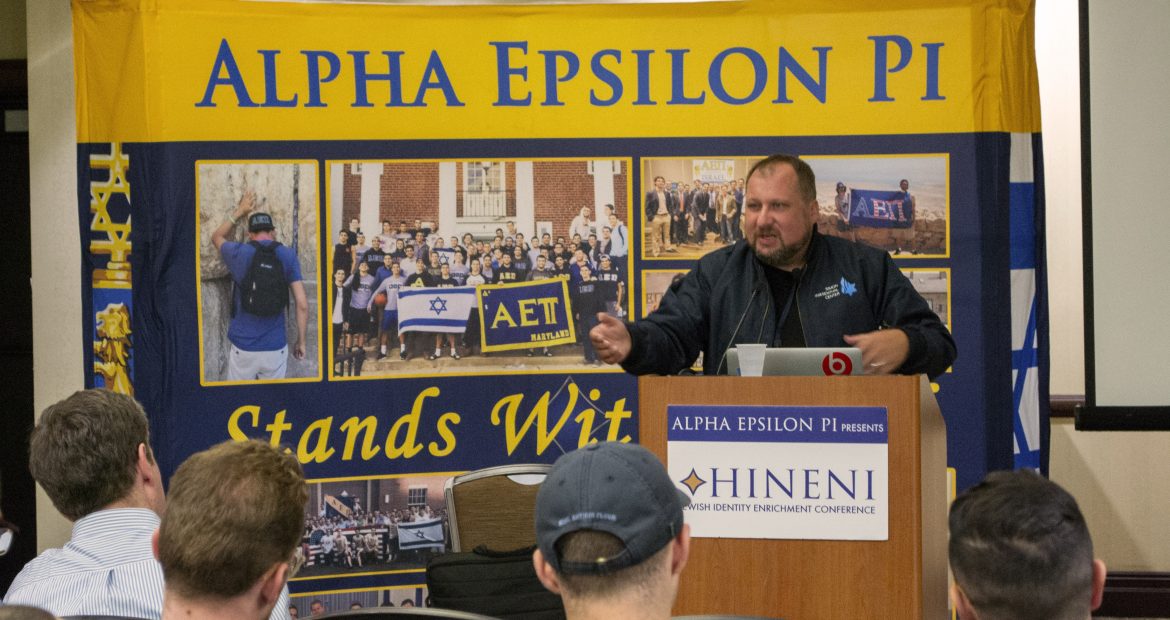 TM Garret is a German-American author, producer, filmmaker and human rights activist. In his youth, TM was involved in—and started—a number of white supremacist and KKK-affiliated groups in Germany, where he was born and raised. Radicalized through music as a teenager, TM eventually left the white supremacist movement. He relocated to the U.S. and founded C.H.A.N.G.E., a Memphis-based non-profit organization that engages in community outreach programs, food drives, seminars, anti-racism campaigns and anti-violence campaigns. Today, in addition to running C.H.A.N.G.E., TM helps young people leave extremist movements and speaks to students about his journey from hate to compassion.

Before November 2018, I knew nothing about Jewish fraternities. In fact, I knew pretty much nothing about Jewish students, life, culture or religion. Until the early 2000s, I only knew negative stereotypes, which I thought were entirely true. I used to be an anti-Semite, Neo-Nazi and leader of White Nationalist groups.

After I left my life in hate groups behind, I still had to overcome many prejudices. Even though I didn’t feel like a hateful person anymore, the pictures of how I saw many minorities were stuck in my head. There were many people that I once had declared to be my enemy, and while I had the opportunity to explore some of them, I had no relationship with the Jewish community until 2018. I knew some Jews, but I never had meaningful conversation with them about being Jewish or my past. Since I was, at one time, a Holocaust denier, I never stressed to visit a concentration camp either. Even in the years after I got away from those hate groups, I thought it wasn’t necessary. I knew that the Holocaust happened, and I was ashamed that I didn’t believe it when I was younger. I didn’t feel like a hateful person anymore. I didn’t feel that I had to reflect on my past as an anti-Semite.

In May 2018, during a trip to Los Angeles, a friend suggested to visit the Museum of Tolerance, which is operated by the Simon Wiesenthal Center and hosts different exhibits like the Civil Rights Exhibit, Anne Frank Exhibit and Holocaust Exhibit. It was my first time really looking back at this part of my past and showed me how important it was to reflect and make amends. I asked the Simon Wiesenthal Center to help me on my journey and I started to work out a program for colleges in September 2018.

One of the first colleges I was invited to was Appalachian State University in Boone, NC. In the wake of the Pittsburgh Synagogue shooting and anti-Semitic graffiti, which was found on campus, Alpha Epsilon Pi teamed up with Hillel and others to set up “Two Days Against Hate”, a two-day program which included an invitation to come to campus and talk about my experiences with hate groups and how we can counter hate.

Just after my arrival, I was invited to dinner with the AEPi Brothers. I didn’t know what to expect. It was my second speaking engagement with the Jewish community and I never had dinner with Jews before. How will they look? Will they all wear Payot and eat Gefilte Fish? Again, my ugly past had a predisposed way of creeping into my idea of how this would go and what they would think of me. Oddly enough, being in the South, we sat down in a traditional southern restaurant and Brothers picked my brain for two hours. To my surprise, none of them wore Payot and no Gefilte Fish was served, so I began to realize that the Jewish community was just as diverse as any other community. Illuminated by this realization, I walked out of the little restaurant and looked forward to interacting with the Appalachian State Brothers and students again the next day.

The program on the following day was concluded by my presentation and followed by a workshop. My past carries some heavy baggage, and sometimes it’s difficult or at least shameful to interact with people, especially those who once were declared enemies of mine. There is always that fear that lives in the back of my head that makes me think the person I am talking to will reject me and walk away once I out myself. When I lecture, I often catch myself insecurely scanning the room to see if I have offended anyone, or if anybody has “turned away” and left the room. Most of the time, my fears are unsubstantiated, as was the case when I was visiting Appalachian State University. It was a special moment when AEPi Brother, Jake Poler (App State, 2019), asked me, “TM, how can we continue your mission?” Picture that; a young Jewish leader was asking a former Neo-Nazi for advice and guidance. Did I deserve that compassion? Talk about a crazy moment. Now, I find myself receiving the compassion that I never truly received in my old life, when I was constantly looking for a sense of belonging. Although I thought I didn’t deserve this compassion from others, I simply feel like it was because I wasn’t ready to show the same compassion. Receiving compassion like this has taught me to embrace others that are different from me and find commonalities. As scary as that can be, it’s worth building friendships instead of walls.

Receiving this very same compassion from young members in AEPi, as a Jewish fraternity, laid the groundwork for me to walk on and be confident in my desire to get to know the Jewish community rather than being scared that they would turn their backs on me as I once did to them.

Encouraged by their unconditional love and respect, I was ready to explore this new world. In the aftermath I have celebrated two Hanukkahs, Pesach and visited a synagogue on Erev Yom Kippur for the first time in my life. I suppose you could say that AEPi was the bridge between my former life and now, as well as to my involvement in the Jewish community.

I was especially excited when I was invited to speak at AEPi’s Summer Leadership Series prior to the 106th International Convention and was later invited back again to Appalachian State University for their second event, “One Day Against Hate.”

AEPi has gained a lifelong friend and supporter.