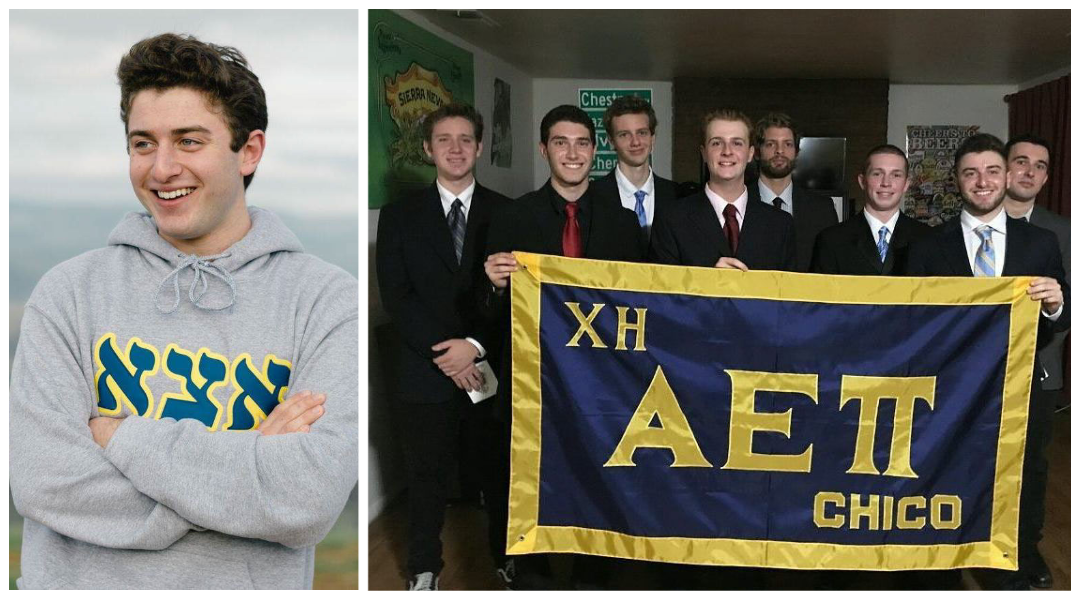 Next week, more than 5,000 Jewish teenagers from 50 countries will make their way to Dallas, TX for BBYO’s annual International Convention (IC), #AZABBGIC2020. Every year, AEPi is proud to help staff the event and connect with teens from across the globe. Whether it’s a one-on-one with our staff, visiting the lounge or attending our infamous #BROneg, we are excited to bring an extra layer of fun to the Convention and meet everyone! Many AEPi Brothers are BBYO alumni, so it’s no surprise that their first AEPi experience was at BBYO IC. Brother Noah Levinson (Cal State – Chico, 2021) was a member of AZA’s Central Region West, which encompasses the San Francisco Bay area, Northern California and Hawaii. Today, he reflects on the impact BBYO had on him as a teen and how AEPi continued to foster his connection to Judaism as a college student.

“My dad was the advisor of my AZA chapter growing up, so I was involved in the Jewish community at a young age. Once I was old enough, I thought I should check out BBYO since my dad nagged about it so much. What I didn’t know was that I would fall in love with it because the people were genuine and it felt like a brotherhood right from the start.”

Eventually, he would become president of his chapter and work on developing a good relationship with its sister BBG chapter. “As I shifted my focus to college that year, I sort of modeled it after a fraternity in a sense. I was recognized as Most Fraternal Brother at Convention. I remember Jon Bridge (VCU, 2012) walking up to me at that Convention and handing me an AEPi jersey. It was the first instance where I had heard of AEPi and planted the seed for college.”

BBYO gave Brother Levinson some of his best friends. He spent a lot of time visiting others in the region that year, and even went to summer camp with a few of them. “Many of the guys that I met in my region, including some from my AZA chapter, joined AEPi. I remember my friend, Dominick Finetti (Cal State – Chico, 2015) telling me he started an AEPi chapter at San Jose State. Ironically, he ended up transferring to Chico later. It was explained to me that AEPi was an adult version of AZA, which was cool. After Bridge gave me the jersey, I wanted to wear it but also wanted to understand why I was wearing it. So, I did my research.”

AZA set the framework for Brother Levinson to have Jewish friends, and seek out other Jews in college. “I knew if I loved AZA, I would love AEPi.” He went on to rush in college because he saw that he could be Jewish in a Jewish fraternity, and that was cool. “It was more than the social aspect. The guys were so welcoming at Chico. I only came back to visit the school a second time because AEPi showed me around in the spring when no one else was on campus. During Choose Chico day, Chico’s exclusive event offered to admitted students, the Brothers brought me to Hillel and I met the guys, including my future Big Brother.”

The structure of BBYO and AEPi are very similar, so he had no trouble connecting quickly with the Chi Eta Brothers and finding his home on Chico’s campus. “AEPi’s sense of brotherhood is very similar to AZA. We both do good and welfares. While leadership development is similar, it’s different at the same time. I know it sounds silly, but both groups gave me a sense of my Jewish identity that makes me feel cool to be Jewish.” Moving up the ranks in his chapter, Brother Levinson has served as the Jewish identity chairman, lieutenant master and master. “AEPi has given me so many opportunities to travel and see the world since joining. I hope to have the chance to work for the fraternity someday and help others like the staff have helped me. AEPi has shown me what a professional should look like after college, and how to network effectively. I’m fortunate to have amazing Brothers here.”

When reflecting on BBYO IC, his favorite moments were spending quality time with AZA brothers from across the world. “Those going this year should look forward to what BBYO has planned. At #AZABBGIC2020, you’ll get a sense of Jewish identities from across all walks of life. Have a good time, and find out what you have in common with anyone new you meet.” He recalls attending #BROneg, and how it’s a prevalent event for all that attend the Convention. “Me and my friends all religiously wore the AEPi sunglasses that are given away. They made us feel uniform and cool.” One thing that Brother Levinson finds interesting is the amount of people that have reached out to him since graduating high school, asking for advice on Greek Life at their respective campuses. “I recommended a friend of mine who’s in Purdue’s AEPi chapter. He asked me a lot about going Greek on campus. I’ve been a resource for a lot of AZA kids, and it’s always nice to give that advice and have connections to people on different campuses because of AEPi.” He hopes that his younger biological brother, who is still in high school and also a member of AZA’s Central Region West, can one day become his fraternity Brother. “My brother has come around, met the Brothers and seen what our Brotherhood is like compared to AZA.”

“My Jewish identity is all credited to AEPi, BBYO and my family. Both AEPi and BBYO were integral to my life so far. If you’re in BBYO and thinking of joining AEPi, reach out to a chapter and just be yourself. You’ll find a lot of similarities between the two, but also a lot of welcome differences. AEPi Brothers shouldn’t underestimate the impact they can have in a younger person’s life. Make sure the BBYO teens meet up with AEPi at #AZABBGIC2020. Having a strong Jewish identity post high school is important in the world we live in today, especially in North America and AEPi is there to offer just that.”

bbyo
« Ultimate Conclave Guide
Voices: How I Turned My Back on Hate »