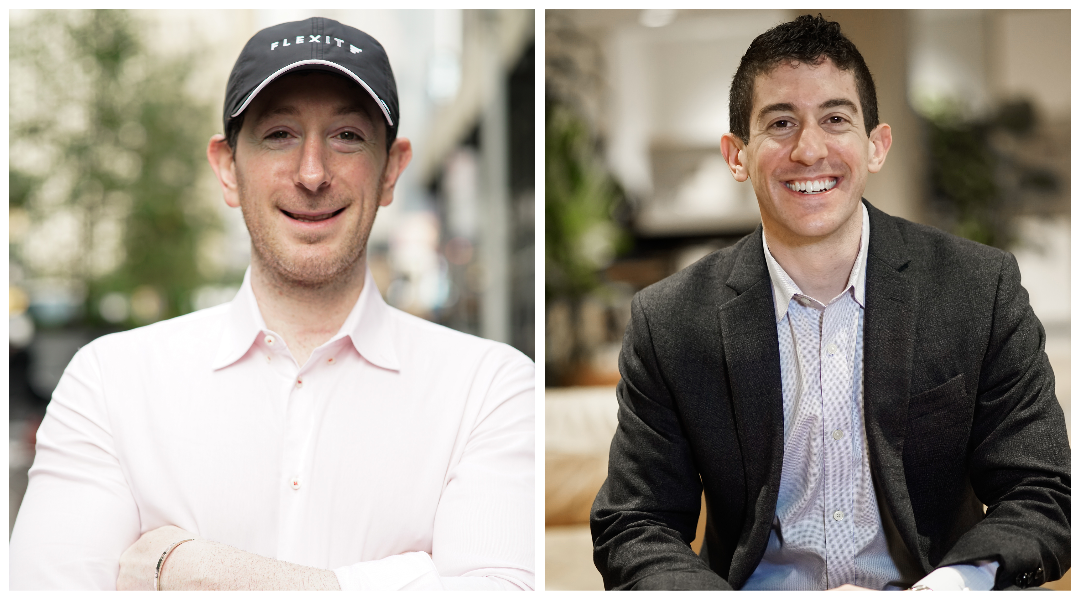 We’re living in an age of subscription-based technology where consumers want access to a product that they can customize and mold into something that’s perfect for them. Look at services like Dollar Shave Club, Hello Fresh and Birchbox. They’ve all set the tone for what the modern-day customer expects. Sure, sometimes it doesn’t work out for companies (RIP MoviePass), but every day we see a new and exciting service we can’t wait to try. Enter: FlexIt, a fitness app created and designed by Brothers Austin Cohen (Columbia, 2011) and Justin Turetsky (Columbia, 2011) that allows users to access thousands of gyms across the country without the need for a membership to use the app.

“FlexIt really breaks down the intimidation barrier of working out and choosing a gym,” says Brother Turetsky. “Our app is a seamless way to access a gym and only pay for the time you use it. There’s no need to sign paperwork, and you get full access to all of the facility amenities as if you were a traditional member. If you only want to work out once a week for 20 minutes, you can, and you’ll only pay a by-the-minute rate that varies from gym to gym.” Gone are the days of buying a membership and working out at your gym one week, then wishing you had access to another facility for its amenities the next. Now, you and your friends don’t all have to be members of the same fitness center, you can be a FlexIt user and meet somewhere new every time! With nearly 2,000 locations on the platform, finding the perfect FlexIt partner location is easy. Once you choose your gym of choice, all you need to do is scan your QR code at the front desk using the FlexIt app. Then simply workout and scan out to end the session. It’s that easy.

Brother Cohen came up with the idea after helping the company, Wheels Up, take off. During his time with them, he was exposed to a similar need for increasing access to improve consumer experience in an on-demand manner in the aviation industry. “I always thought FlexIt would make it, and the most exciting part is watching it change people’s lives. I get emails all the time from users who tell me this is something they’ve needed and wanted all along. Two years ago, FlexIt was just an idea in my head and now people all over the country are using it. We’re still only in the first inning of our company’s lifespan; there’s a ways for us to go. It’s moving at an amazingly fast pace and since Justin has come on, it’s taken a whole new life.” Brother Turetsky describes how Brother Cohen’s desire to access things on demand was vital in the concept of their business. “Austin loves using food delivery services and I’m pretty sure he was the first person I knew to use Uber. He’s an early adopter to these apps, an example of the perfect consumer who wants it all on his phone. He gets the consumer trends and saw FlexIt’s opportunity.”

Both Brothers met at Columbia University’s New Student Orientation Program (NSOP) before even considering AEPi. Brother Turetsky describes. “We were at the fitness center playing pickup basketball. A friend, who also happened to be an AEPi, introduced us. Fitness and being active was always important to both of us. Austin was a competitive lacrosse player and I did competitive hockey. While we were in different programs at Columbia, we spent a lot of time together because of the fraternity. AEPi was an essential point for us.” For both Brothers, AEPi has always been an asset they could rely on to build up FlexIt. “We got a lot of support from the university and business school, but the lifelong relationships we’ve built with Brothers has been key. There are a lot of entrepreneurs in our chapter who have supported us, whether it was advising or making proper introductions for partnerships and investors. We tap into and lean on our AEPi network all of the time.” In the early stages of FlexIt, one of their chapter Brothers who was involved in the friends and family phase did all of the company’s digital marketing as a show of good faith and belief in what they could do.

Brother Turetsky was working on a start-up company of his own and working at international law firm, Fried Frank, when Brother Cohen tapped him for FlexIt. He became a part of the friends and family testing phase, where Brother Cohen looped him in on his mockups and designs. After joining part-time with FlexIt in early November 2018, Brother Turetsky became a full-time team member in February 2019. The app launched in January 2019 at CES, an annual trade show that typically hosts presentations of new products and technologies in the consumer electronics industry, and recently celebrated its one-year anniversary.

More than anything, FlexIt functions as a marketing tool for its partners, helping to cater to changes in Millenial and Gen Z consumption trends. “We want to deliver on our offer to be a marketing extension to fitness partners. We want the consumer to get something great, while the partner benefits as well,” Brother Turetsky explains. “We have a lot of people tell us that they’re trying new, and sometimes smaller, gym chains and they love a trainer who worked with them or specific amenities. I love our map page and amenities search component in the app. We also have a wallet feature that offers special incentives and bonuses, and there’s a rewards program that gives a bonus for hitting a certain threshold for logging so many workout minutes.”

Gym partnerships are only the beginning for FlexIt. Brothers Turetsky and Cohen have a vision to partner with nontraditional gyms and be involved with all sports. Brother Turetsky explains, “We hope to eventually partner with rock climbing and golf facilities, batting cages, or others. The idea is to expand the spectrum on what opportunities people have to move, have fun and stay fit.” Currently in twenty states with the number looking to grow every day, they are ecstatic with the results since launch last year. “Launching a national company is a tall task, and we launched in six markets at 300 clubs.” For those thinking of starting up their own app, the Brothers offered some simple advice: Have patience, persistence and true virtues.

Brother Cohen said, “This has been like nothing else. It’s hard and it’s been a lot at times, but it doesn’t feel like work to us. At the end of the day, we’re doing this together because we trust each other so much and that’s unlike any other experience we could ask for. We joke all the time about how FlexIt wouldn’t be possible has we not met each other and decided to work together.” Brother Turetsky agreed, adding, “It turns out my fellow founder and partner was right next to me all along.”

You can find more information about the app on Instagram or the FlexIt website. Additionally, Brothers Turetsky and Cohen have created a promo code for our readers. Get 50% off access to all partner facilities on the platform now through May 1 using code: AEPIFLEX.