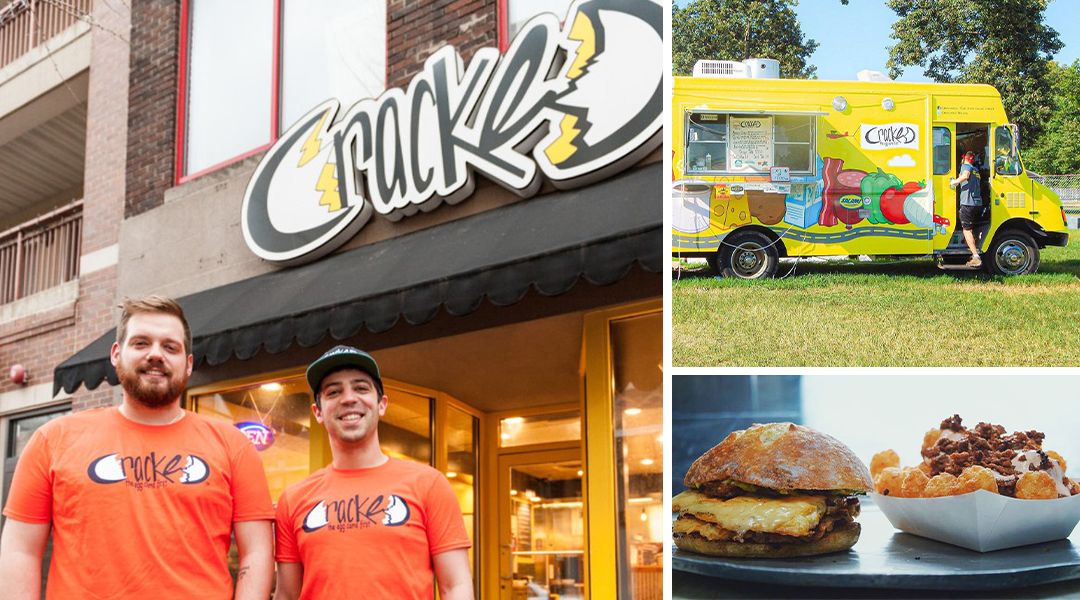 Brother Daniel Krause (Illinois, 2012) is trying to make a name for himself in Wicker Park, a bustling neighborhood with more than 25,000 people in West Town Chicago by answering an age-old question while serving up some delicious food on Milwaukee Avenue. His restaurant there, Cracked: The Egg Came First, is his second in his growing chain. In between serving customers on a busy weekday, Brother Krause gave some insight on the struggles and successes he’s faced.

“Growing up nearby in Wilmette, I came to the city often and dreamed about being part of this scene. It’s rewarding to finally see our restaurant name on a Chicago building in a neighborhood I longed to be a part of. I have my friends and family in Chicago, and AEPi Brothers come out of the woodwork to support me.”

Brother Krause says it is challenging to market the restaurant in such a big city. “We took our customer base and popularity for granted at the first location in Champaign. Here, we’re a small fish in a huge pond but I’m confident in our concept and food.” He finds that opening this location is similar to starting from scratch all over again, you need to build a customer base and compete against the big dogs who have millions to sustain their businesses. “My partner, Elliott West, and I built this restaurant chain by hand on a small budget. We took out loans and are doing what we can to sustain ourselves. We’re lucky that our Champaign restaurant is self-sustaining, but we have work to do before the Chicago location is. Playing with the big guys is tough, but I know if people just try our food, they’ll come back again.”

He isn’t a stranger to trial and error, citing how the original concept was a series of mistakes that could be learned from. As a sophomore in college, he pitched the concept of Cracked as an omelet bar food truck to his team during an internship with Lettuce Entertain You. After deciding omelets weren’t conducive as a to-go option, they decided to go with breakfast sandwiches instead. Everyone on the team loved the idea and it became a sensation, winning the internship’s restaurant concept competition. “That moment validated that this idea could work. I asked a friend of mine to start the food truck business in 2012 with me and the rest is history. I created the logo with a fellow AEPi Brother and friend in AEPhi, Samantha Mann.”

Brother Krause spent five years in the food truck business before buying out his business partner and opening his first restaurant location in Champaign. “We had expanded to two food trucks and there was always something wrong with them.” Whether it was a flat tire or the generator, propane tank or hot water not working, maintaining the vehicles was a big problem. The business model wasn’t working, and overhead was too much. When the students were gone, it was a struggle to stay open. “I’ll never forget the day I decided to open a restaurant. It was extremely hot in our truck one day and we had the back door open. The health department came by and gave us a hard time about that, and that’s when I looked at Elliott and said we were starting a restaurant.” Opening the restaurant was a dream come true for him. He had always wanted a restaurant but didn’t have the funds or experience to actually start there. “The food truck was a great learning experience for me, I could mess up almost every day and still learn from my mistakes. It allowed me to grow into a functioning and mature entrepreneur, so when I opened in Champaign, I felt like I was really ready. It was truly a special moment.”

His Delta chapter Brothers were beyond supportive, then and now, of the concept. He found that underclassmen in the fraternity were always stopping by the food truck. “When we opened the restaurant in 2017, Brothers from five years after my graduation were coming in to support the brick and mortar store. A lot of Brothers stopped in during our soft opening of Chicago and that meant a lot.” Brother Krause knows that his AEPi Brothers will always be a group of people he can count on. “Our group of guys were close-knit and mostly from the North Shore. Having that made a large campus feel smaller and more like home.”

Cracked has come a long way from omelets. It’s custom for all breakfast sandwiches to come with hash browns and eggs on it. They also have a popular dish in Champaign called the underdog, which is an all-beef hot dog with scrambled eggs and onion. “We’ve had some ideas that didn’t work. We tried one dish with hash browns, egg, salami, half of a hot dog and barbecue sauce and it was miserable. I also love beignets but couldn’t get them right. It’s nice having a full restaurant versus the food truck though, you can let your mind wander with creativity.”

While he has no concrete plans to expand, he is looking at options for a third location. Before expanding, he’d like to get a better handle on the Chicago store that was opened in October 2019. “I’m glad Champaign is running smoothly for us. Lewis Nesbit, our GM there, has been running that restaurant while we build up in Chicago and is doing a phenomenal job. We’ve gotten a lot of excitement from U of I graduates, but that’s only thousands of people in a city of millions. Most of the city hasn’t heard of us yet, so we have to continue working on winning over the customers again. We’re back to basics as if we were a food truck again.” Brother Krause finds Wicker Park to be a prime location, with business slowly getting busier during the week and on weekends for brunch. With the continued help and support of his parents, Brothers and partner Elliott, he knows they’ll continue to succeed.

“In situations like mine, all I can say is don’t be afraid to fail. It’s the best way to learn. I couldn’t have done this without the lessons learned from our food truck. People are always so afraid to fail, but failure is inevitable. It’s how you deal with that failure that allows you to grow.”

If you’re ever in Chicago or Champaign, check out the menu and stop on in! Brother Krause is always happy to see a new face.