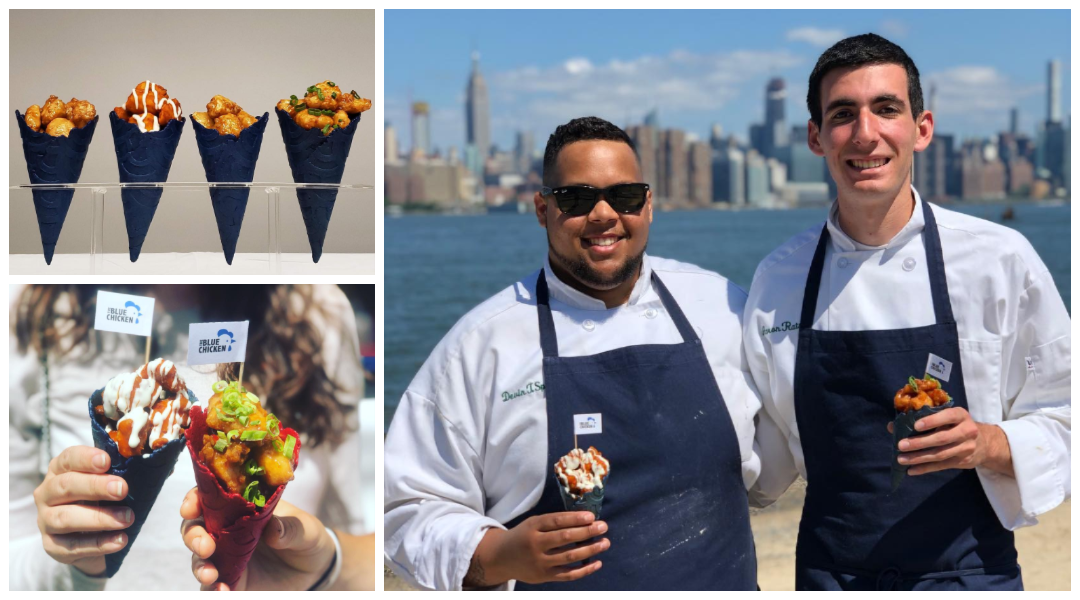 New York’s Smorgasburg, America’s largest open-air food market, is described as “the Woodstock of eating.” So, yeah, it’s a big deal. Smorgasburg—which attracts around 30,000 people each weekend—is highly selective as far as the vendors it partners with. Out of hundreds of yearly applicants, coordinators seek highly motivated vendors who not only have great ideas but have given thought to their marketing and production strategies. For a chef fresh out of culinary school, getting a vendor’s spot is the kind of “big break” needed to gain name recognition and kickstart a successful career.

After interviewing last October, Brother Aaron Ratner (Delaware, 2018) secured one of those spots. Almost immediately after graduating culinary school in Napa, California, he moved to New York to start working on his new Smorgasburg food stand, The Blue Chicken. The concept is simple: the best fried chicken, made fresh, served either in a blue-corn waffle cone or as a sandwich.

Brother Ratner’s love for cooking started at home. Coming from a large Jewish family, he would frequently help cook dinner for 50-70 people during Jewish holidays. “Before I knew it, I was the one cooking for the holidays and my mom was helping me,” he said. During high school, he also had a two-month-long internship at a Michelin Star restaurant in London. “Working in that atmosphere was incredible and immediately got me hooked,” Brother Ratner said. “Seeing the high level of service and everything that goes into every single dish was truly amazing to see.” He was attracted to the University of Delaware for its Hospitality Business Management program. He was also a founding father of the Rho Deuteron chapter of AEPi in 2015.

“Being in AEPi as a founding father was a great experience. As a freshman, school can be intimidating but being able to go to the house for Sunday football and just hang out with Brothers is awesome. Being a founding father developed me as a leader and taught me about growing something from the beginning, which is experience I was able to transfer to The Blue Chicken.”

After graduating from the University of Delaware, Brother Ratner enrolled in a post-graduate culinary program where he was able to hone his cooking skills. It was during this time that he figured it was time to bring a dream to reality: he took a chance and applied to be a Smorgasburg vendor. “I developed this fried chicken concept and just went for it,” he said. “I applied to Smorgasburg in October of 2018, and I wasn’t expecting to hear back since they receive hundreds of applications a year. However, I did hear back and was invited to interview and hold a tasting for the judges. I guess they liked it, because a week later they told me I was accepted.”

Getting the acceptance from Smorgasburg was great news for Brother Ratner, but came with a new challenge. “I now had to put a business together, hire employees, get all my business licenses and so on,” said Brother Ratner. “I learned a lot throughout the process but it was nerve wracking at first. The opening weeks were pretty stressful.” Since he was still in California for most of this process, Brother Ratner had to make effective use of time when he finally got to New York. Within a week and a half, The Blue Chicken was ready to serve its first customers—including his chapter Brothers, who had traveled to New York to surprise him.

The reception of Brother Ratner’s chicken is better than he could have expected. The Blue Chicken is now planning to expand into another location, and eventually open a storefront location. While running a business has its challenges, Brother Ratner loves seeing the smiles on people’s faces when they eat his chicken, including the faces of pain when they eat the spicy chicken sandwich. Brother Ratner wants other Brothers to know that to follow their passions, it’s essential to do research before jumping right in. “Find a mentor who did it before you and won’t let you make the same mistakes they made,” he said. “It’s a big investment. You invest time and money in your passions, so you might as well use it to develop yourself first.”