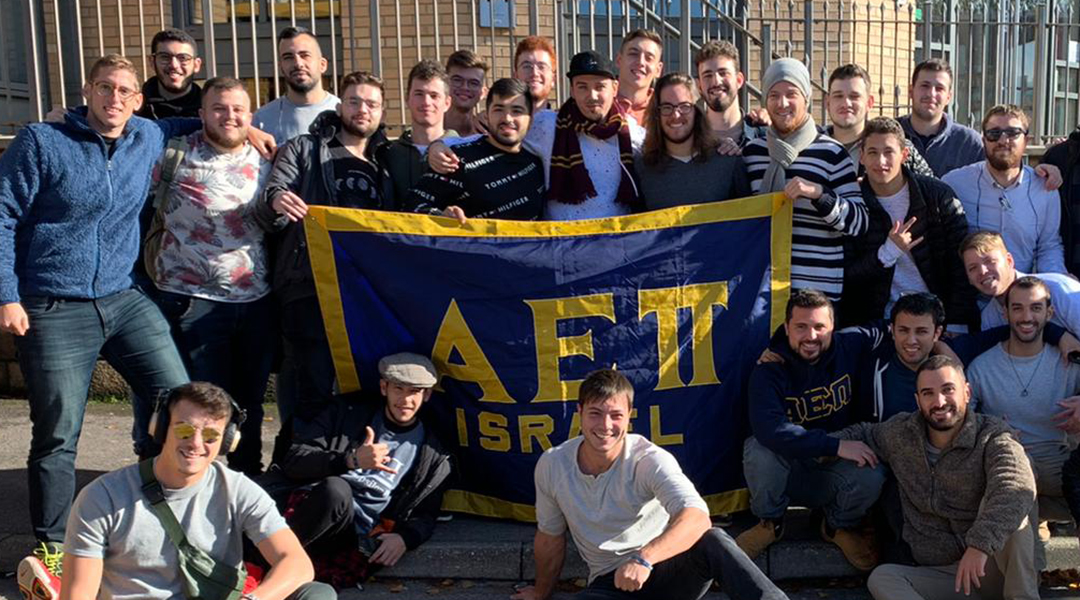 Last weekend, more than 100 undergraduate and alumni Brothers, volunteers and staff came together in Oxford for leadership development at European Conclave. Altogether, there were seventeen chapters in attendance for this annual event from schools in Israel, the United Kingdom and the United States. Brother Ariel Vetzler (Bar Ilan, 2020) detailed the weekend experience of a lifetime that he had with six of his other Brothers from the Vav chapter at Bar Ilan University.

“The U.K. is the greatest. I’m not sure if it was because of the people [at conclave] or because London was so pretty, but I spent the entire plane ride home writing my goals. Because of Conclave, I now have a long-term vision for my chapter. Not just a one-year, but a five-year plan.”

Undergraduates like Brother Vetzler enjoyed a day packed with programming on Saturday, October 26 at the University of Oxford thanks to the generosity of sponsors like Oxford Chabad. AEPi Foundation CEO Andrew Borans (Florida, 1980), AEPi Supreme Scribe Scott Knapp (Florida State, 1992) and Past Supreme Master and U.S. Special Envoy for Monitoring and Combating anti-Semitism Elan Carr (UC Berkeley, 1990) were in attendance to help AEPi staff provide programming on health and safety, rush, the new member process and more. This was Brother Vetzler’s second European Conclave, but he still feels like he learns something new every time. “Elan Carr really caught our attention; he is an amazing speaker. I asked him when he finds time to rehearse his speeches and he told me to practice until I get perfection. He taught me that you don’t have to be talented to learn to speak, it’s not a natural thing we’re born with; you just need to work hard.”

Chapters had the opportunity to sit with AEPi volunteers and dive more into the nitty gritty of how to run day-to-day operations, while problem solving some of the struggles they may be facing. Brother Vetzler had the chance to speak with Saul Yardley (London, 2017). “I loved meeting Saul. We sat for hours and planned out my entire rush and new member process. He told me he was coming to Israel in a few weeks and planned on coming to some of our rush and pledge events. I really hope we can maintain a connection with him. Having AEPi staff like Jason Kirschtel (Buffalo, 2014) and Kyle Whitlock (TCNJ, 2014) was great because they were so open to discussing things with me. They told me to call them whenever I want, which made me feel like I really get their attention when I speak. I felt like I was their priority. Andy Borans also spoke to me about my chapter and gave a lot of tips to us. He had that sparkle in his eyes when talking to me, the kind of sparkle that shows me how passionate he is about the Fraternity.”

“One thing that I found rewarding was bringing Brothers who weren’t really involved with the chapter. Throughout Conclave, I saw them becoming more invested in the Fraternity. They were approaching other Brothers and asking what their experience was and why they joined. After Conclave, my rush chairman told me that those two Brothers decided to join rush committee because of their Conclave experience.”

Hearing things like this from Brothers in attendance made the weekend worth the while for Brother Vetzler. It can sometimes be difficult to be a fraternity in Israel because AEPi was the first one there (and the only one now). “No one knows much about fraternities in Israel except for what the movies tell us. A lot of the Brothers who were in the IDF find the fraternity comforting because they haven’t felt a connection like this since being in the army. I want people to feel at home with AEPi in Israel and that they have somewhere to go to if they live here, are visiting or on a Birthright trip.”

Brother Vetzler truly believes there is a major difference between Conclave and International Convention. In his eyes, Conclave brings people together and gives them the opportunity to really meet and problem solve based on their own experiences. “I had a chance to meet Brothers from chapters in Israel that I didn’t even know before. Now, our executive board members are talking to one another and learning from each other.”

Outside of programming, Brother Vetzler and his chapter Brothers enjoyed the sights of London. They attended a London Broadway showing of the Book of Mormon and had the chance to catch an NFL game when the LA Rams took on the Cincinnati Bengals.

“AEPi has truly helped me find my voice. The most important thing I’ve learned since joining is that you can make mistakes as long as you learn from them. Your Brothers will offer you constructive feedback to make you better. I’m not afraid to speak up now, and it’s great because people know me on campus and want to join AEPi. I love feeling comfortable and having the courage to be myself.”