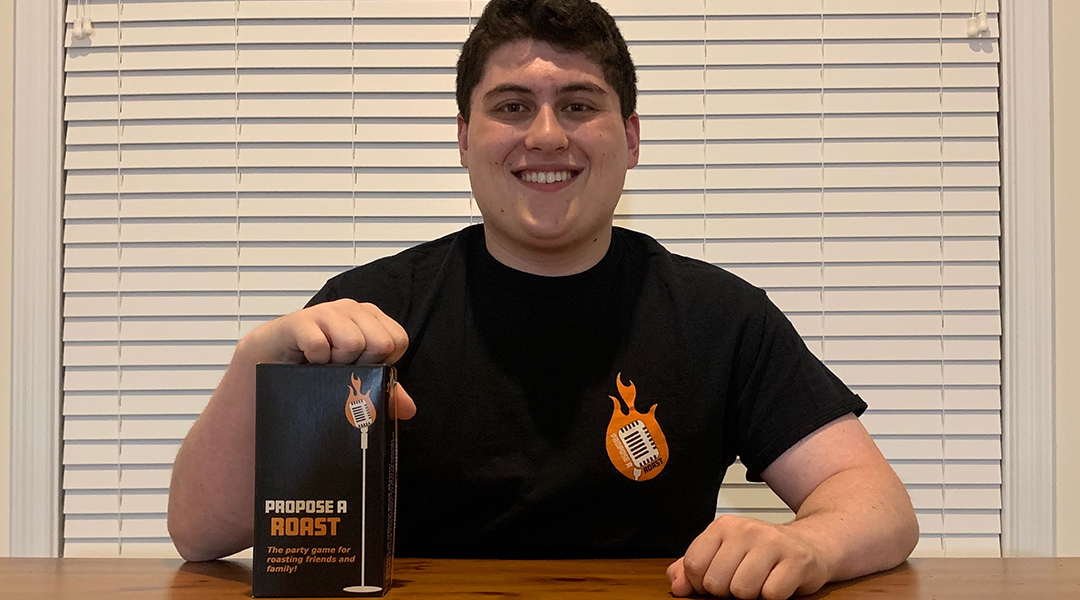 When most people want to play a party game with their friends and family, they go to Target and look through some of the popular new picks, or grab a classic off the shelf. Brother Ben Schulman (TCNJ, 2019) decided that he wanted to make his own.

Brother Schulman’s idea came from a fond memory at his grandfather’s birthday. Everyone expected his aunt to get up and give a birthday toast, but instead she delivered a birthday roast. Everyone including his grandpa found the sharp, good-natured insults to be hilarious, and Brother Schulman found it inspiring. This experience would be the groundwork for the party game designed to provide the ultimate roasting experience: Propose a Roast.

“I thought to myself, ‘hang on a second, we’re all having a good time here, so I can give this type of experience to other people!’ And that’s where my idea came from.”

Brother Schulman is an alumnus of the Alpha Eta chapter at the College of New Jersey. He grew up with an entrepreneurial spirit in his family, and during college he spent time developing Propose a Roast from a fun concept into a business. The party game centers around “getting competitive with your insult humor,” and witty jabs meant for everyone to laugh at themselves rather than to hurt feelings.

After fleshing out the game design and play-testing for over 100 hours, Brother Schulman entered Propose a Roast into a business plan competition at the College of New Jersey, which he ended up winning. This convinced him of the viability of the game, leading to the launch of a Kickstarter campaign ending August 30th, 2019. Currently, the Kickstarted project is fully funded with 112 backers. While the card game is in production and getting ready to ship, Brother Schulman will be working on the video game version of the game, which will be played in the same way only online. The concept is one he intends to popularize with online personalities like YouTubers and Twitch streamers.

In the long-term, Brother Schulman expects to take this idea as far as it can go. One expansion pack is already available on Kickstarter with plans to create more expansions down the road. He has plans to enter his product on ABC’s business reality contest show Shark Tank, where entrepreneurs present their product to a panel of investors who will decide which product to invest in. Furthermore, he has plans to work with Comedy Central—known for its Comedy Central Roast specials—to create a partnership.

Of course, the Alpha Eta chapter at the College of New Jersey has also been a tremendous help to Brother Schulman. In addition to helping him play-test the game, his Brothers appear in promotional videos for the game on the game’s website. In addition, Brother Schulman is working to create a fraternity philanthropic program out of Propose a Roast, called Roast for a Cause. The idea is that participants will be able to pledge money for the opportunity to fling insults at a willing target.

Brother Schulman has always had the drive to be his own boss. He hopes to run his own business someday and sees Propose a Roast as the golden ticket: “I come from a family of entrepreneurs, so this has always been ingrained in me,” he said.

“Being able to take something by the horns and say ‘this is mine’ is what drives me.”

Take a look at the Kickstarter and website for Propose a Roast.