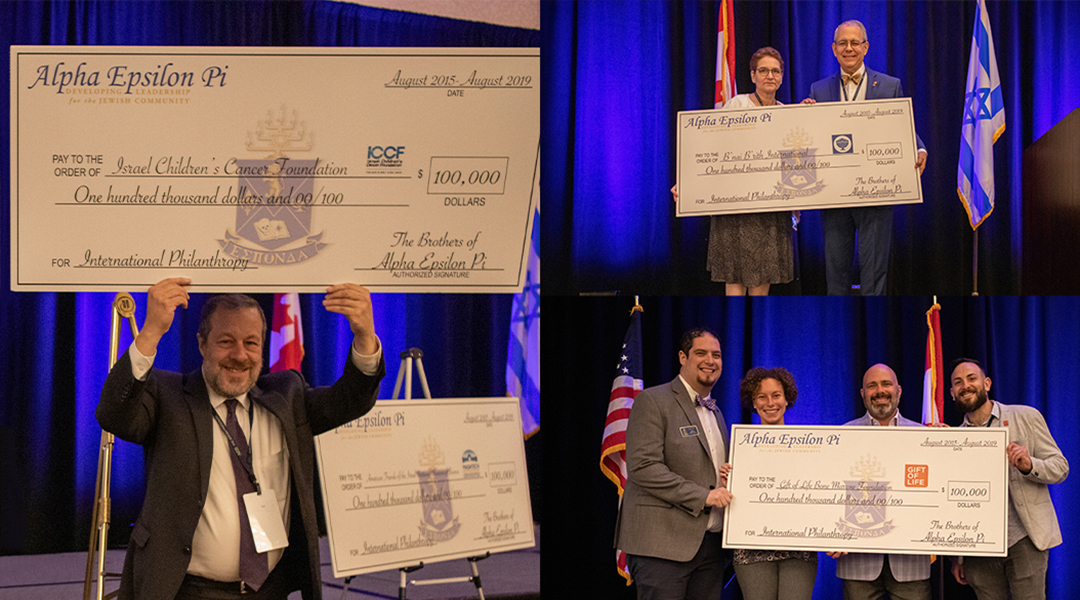 Five years ago, the undergraduate Brothers of Alpha Epsilon Pi (AEPi), the world’s leading Jewish college fraternity, launched a $1,000,000 commitment to 10 Jewish and Israeli philanthropies. Brothers in nearly 190 chapters in six countries around the world raised funds through AEPi’s Official Philanthropy Program (OPP) to accomplish the goal. This was the single largest philanthropy project that the undergraduate students have ever undertaken.

“As a Jewish Fraternity, AEPi is committed to Tikkun Olam – repairing the world. Our undergraduates have chosen to give back to these 10 Jewish and Israeli causes because that is where our heart and soul are, with the Jewish people and with Israel,” said Jeff Jacobson, AEPi’s Supreme Master (International President. “Teaching and reinforcing the lessons of Tikkun Olam in college helps to foster the development of our Brothers into tomorrow’s Jewish communal leaders.”

Being charitable is a part of the fraternity experience. According to the National Interfraternity Conference (NIC), last year fraternity men raised more than $20 million and dedicated 3.8 million man hours to helping local and national charitable organizations. But, only AEPi has committed to raising funds only for Jewish and Israeli causes.

“We are extremely proud of the accomplishments of our undergraduate Brothers for taking on this challenge and working so hard to accomplish this commitment in just five years. This program has been completely driven by our outstanding undergraduate leadership. They created the goal and selected the beneficiaries because they are programs which matter to them and to the future of Israel and the world’s Jewish communities. And, then, they went out and raised a million dollars to help Repair the World,” said Jim Fleischer, AEPi’s Chief Executive Officer.

For more information regarding AEPi’s OPP and their philanthropic beneficiaries please visit aepigivesback.org.

Alpha Epsilon Pi (AEPi) is the world’s leading Jewish college fraternity, operating chapters, colonies and interest groups on nearly 180 college campuses in the United States, the United Kingdom, Austria, Canada, Australia and Israel. Founded in 1913, AEPi has more than 100,000 living alumni. While non-discriminatory, the fraternity’s mission – developing the future leaders of the Jewish communities – is demonstrated every day through acts of brotherhood, Tzedakah (charity), social awareness and support for Jewish communities and Israel.