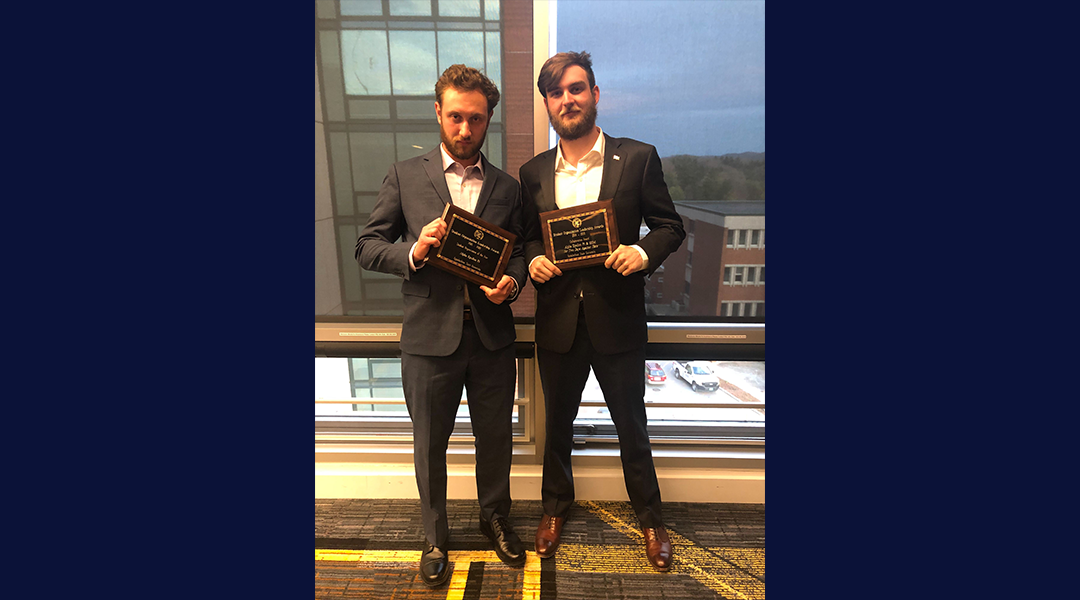 Most AEPi Brothers join the fraternity by rushing an existing chapter. Koby Ellick (App State, 2020) and Jake Holtzer (App State, 2020) are some of the privileged few who had the opportunity to create their chapter from the ground up. In 2016, Brother Ellick reached out to AEPi International Headquarters about founding a chapter after recognizing a need for a Jewish community on their campus. The Mu Theta founding fathers began on the path to a life-changing experience. Brother Ellick said he didn’t want to do this—he needed to do this. “Looking back, I had absolutely no clue what I was getting myself into,” Brother Ellick said. “There were many moments where I panicked and thought I was extremely in over my head, but it was the other founding fathers that quickly rekindled my faith in what we were building whenever I was second guessing myself.”

In 2018, Brothers Ellick and Holtzer each attended one of the two tracks of the Hineni Summer Leadership Series at AEPi’s 105th International Convention. Brother Ellick attended the Tikkun Olam track, which brings contemporary issues into a Jewish context, and Brother Holtzer attend the Jewish Identity track, which focuses on finding and defining one’s own definition of Jewish identity. They were expecting convention in Phoenix to be a fun time, but weren’t exactly ready for the extent to which the Hineni Summer Leadership Series would legitimize their experience as founding fathers of AEPi.

It was Brother Holtzer’s first time at AEPi’s International Convention. He had heard from Brother Ellick, who had attended convention in Las Vegas the year prior, that there would be opportunities to meet Brothers from around the world and grow his professional network. However, the Jewish Identity track of Hineni is what made the experience unique. Speakers at the Summer Leadership Series expounded the history of Judaism, how to keep Judaism in one’s life on a daily basis, and most importantly what being Jewish means to each individual.

“While Judaism never used to be strong in my life, the Jewish Identity track gave me a chance to hear other Brothers’ experiences. I got a deeper understanding of what it means to be a Jewish man, as well as how to run a chapter.” -Brother Holtzer

Looking back on the Summer Leadership Series, Brother Ellick recognizes the lasting friendships he made at the AEPi conventions he attended, which has helped to define his undergraduate experience. Brother Ellick has made strides to keep the Mu Theta chapter involved in AEPi’s international community, and both he and Brother Holtzer keep in touch with the friends they made at convention to this day. “I’ve made it a tradition in my chapter to go on chapter road trips just to illustrate to the rest of my chapter brothers how important it is to foster connections with other AEPis around the nation,” says Brother Ellick. “I tell all my chapter brothers periodically that if they aren’t taking advantage of opportunities in AEPi, like convention, that they are truly not getting their time and money’s worth for their involvement in AEPi.” For Brother Ellick, this illustrates that the connections made in AEPi go far beyond the traditionally-described four-year fraternity experience.

A pivotal experience for both Brothers was the service component of the Hineni Summer Leadership series, where all participants worked on a community service project for battered women and children in the local area. Brother Ellick fondly recalls the efficiency and motivation of his Brothers from all over the world to get their tasks done in the name of community service. He was amazed to see everyone motivated by the same ideals and passions, grounded in the Jewish concept of Tikkun Olam. “The fact that we all share in the importance of Tikkun Olam as an entire organization blows my mind sometimes,” Brother Ellick says.

“That experience was incredible for me because it really highlighted something profound about fraternity life that most of the time others on the outside do not get to see. And in that situation in the women’s shelter of Phoenix I felt like I was working with a team I had known for years, even though these were my Brothers from around the nation who I didn’t really know all too well. But our collective drive to succeed and help was in full swing.” -Brother Ellick

While Brothers Ellick and Holtzer had their own unique experiences with Summer Leadership Series, both Brothers took away unforgettable memories and knowledge that will stay with them for the rest of their lives. They were able to further invigorate the passions that led them to the founding of Mu Theta in the first place, and proudly embody AEPi’s mission by being leaders of the Jewish community.