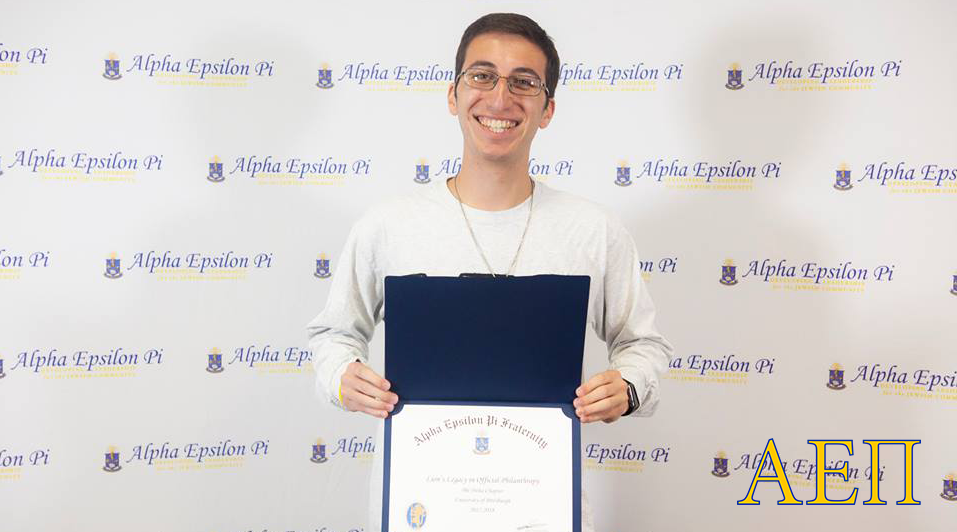 Noah Rubin (Pittsburgh, 2020) grew up surrounded by the knowledge of Judaism. He spent time as a Madrich—a rabbi’s assistant—during high school, which helped him commit many prayers and practices of Judaism to memory. He immediately immersed himself in Jewish life at the University of Pittsburgh, and followed in his father’s footsteps by joining AEPi, where he is currently master of the Phi Delta chapter. Brother Rubin always had the “how” and “what” of Judaism, but still found himself looking for the “why.”

“A lot of what I knew about Judaism and Jewish identity was just words to me, which didn’t have any tangible meaning that I could wrap my mind around. I wondered how to make my Jewish identity mean something.”

Last year, at his second AEPi International Convention, Brother Rubin decided to apply for the Jewish Identity track of the Hineni Summer Leadership Series. The Jewish Identity track involved roundtable discussions focused on individual identity, along with a community service project for battered women and children in the local area. “The Hineni Jewish Identity track made me think about what all this means,” Rubin said. “Why should I care about it, and can I bring any of this back to my chapter?”

The Hineni Jewish Identity track allowed Brother Rubin to dive into these questions not only for his benefit, but for the benefit of his Brothers and his community. “I wanted to be able to bring something tangible back to my chapter and my community,” he said. For two days, Brother Rubin participated in discussions focused solely on what it means to be Jewish and how to make it meaningful. One of the leaders in discussion was Rabbi Klatzko, who shared the wisdom of selfless giving with the attendees: “The biggest mazel in life is knowing that giving will not make you poor.”

Brother Rubin took that advice with him on the service trip and left with some answers: “It was so simple to be able to help others and I think that’s the important lesson: you don’t need recognition to do good work. One of the points that came up in a lot of the discussions was ‘How can you make your Jewish identity mean something?’ For me, that was service.”

His experience helped Brother Rubin address a need in his own chapter as well. During his run for master, many Brothers of Phi Delta noted that community service events hosted or supported by the chapter lacked structure and were squandering their full potential. The Brothers felt like they could be doing more. With the information from the Hineni Summer Leadership Series in hand, Brother Rubin helped establish a community service chair on the chapter’s e-board. The change will be implemented in fall of 2019 and the hope is that Phi Delta will be able to host meaningful, intentional community service events on a regular basis.

Following the Summer Leadership Series, attendees joined their delegation and more than 150 others at AEPi’s 105th annual International Convention, attending sessions covering everything from AEPi’s history to chapter leadership. Brother Rubin’s fondest memory was running into Brother Illya Nuzbrokh (St. Andrews, 2020), whom he had met the previous year at the 104th International Convention in Las Vegas. After not seeing each other for a whole year, the two Brothers immediately started catching up throughout convention sessions. “It was as if no time had passed,” Brother Rubin said. “Everyone has old friends and it’s fun to catch up with them, but when you’re in a Brotherhood, it’s something more.

“Before I attended Hineni, a lot of words about Judaism were just words. Convention was an unforgettable experience, but if you want a specific, transformative experience, definitely apply for the Summer Leadership Series.”