Voices: How AEPi in Israel Reconnected Me to Jews at Home 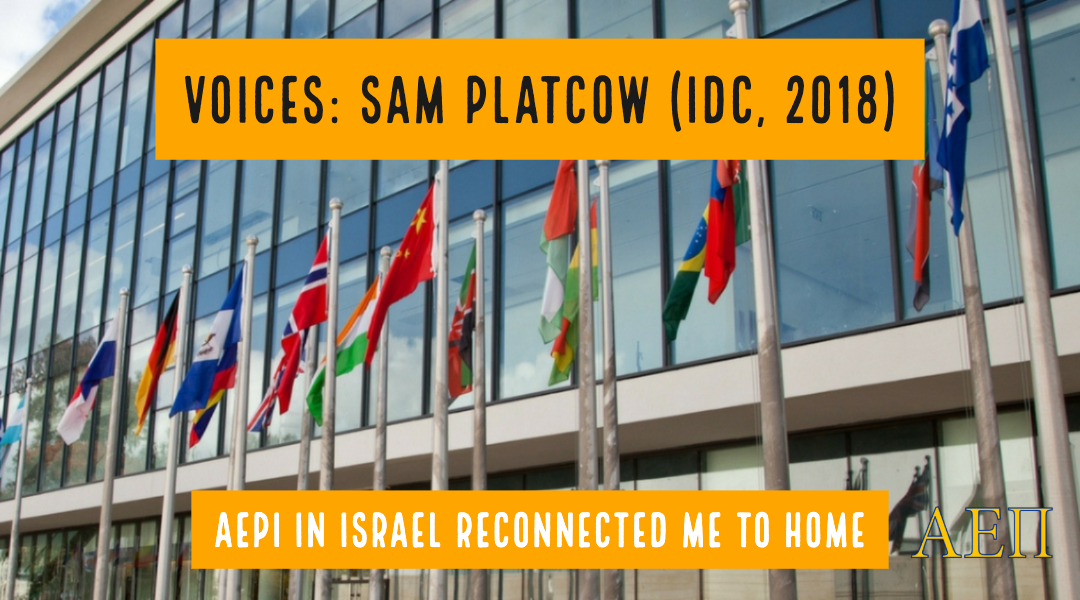 We’ve all experienced it: losing touch with friends after senior year of High School. The best of friends go their separate ways in order to continue their education. Who can say if your friendships will really endure?

Upon acceptance to the Interdisciplinary Center Herzliya (IDC), I moved to Israel to start my college career as all of my friends went to their respective schools all over the United States. After a year or two, almost all of my High School relationships had been reduced to Instagram hearts and Facebook likes. Although this sounds sad, I’m sure you can relate. We’re hyper connected but somehow isolated in more ways than one. Yes, we’re really only ever a phone call away, but starting a new chapter in life means that sometimes, important relationships in the past may not be able to stay alive.

Of course, living in Israel means living in a Jewish country and studying at predominantly Jewish schools, but I still felt the need to find people with similar interests and goals. Where would I find my niche?

Despite these facts, many of my friends and I ended up walking the same the path. This path was the Jewish Fraternity. No matter how many miles away from each other we were, many of us joined the same Fraternity, AEPi. Many of us had no clue what AEPi was in High School. Miraculously, almost like it was meant to happen, a bond was reignited between us. My friends were now Brothers. It seemed we could relate even more, on a different level then in High School. What an interesting coincidence: we had separated entirely, even living across the globe but joined the same fraternity.

AEPi was the answer for me. Finding the Aleph chapter at IDC was a blessing: in an unforeseen way, AEPi in Israel actually enabled me to connect back with the United States! While it gave me a wonderful and diverse friend group in Israel, it became the reason I reconnected with so many friends with whom I hadn’t talked to for years.

In a foreign country, AEPi provided a place that helped me grow as a person with a group of people who had similar goals in life. I became comfortable in a country that was 5,500 miles away from my hometown. Finding out through Facebook that my friends got into AEPi was refreshing. I knew that we were all connected by something larger, that we could all sit down together a year or even three from then and be able to relate to one another still.

Fortunately I’ve had that experience, sitting down next to an old friend who you hadn’t talked to in years, still being able to talk to as if those years had never happened. Thanks to AEPi, I was able to rekindle broken friendships I thought lost forever. It turns out that being in a near completely Jewish school may have been similar to a school with next to none. AEPi was the perfect community for me and it’s still providing so much more.