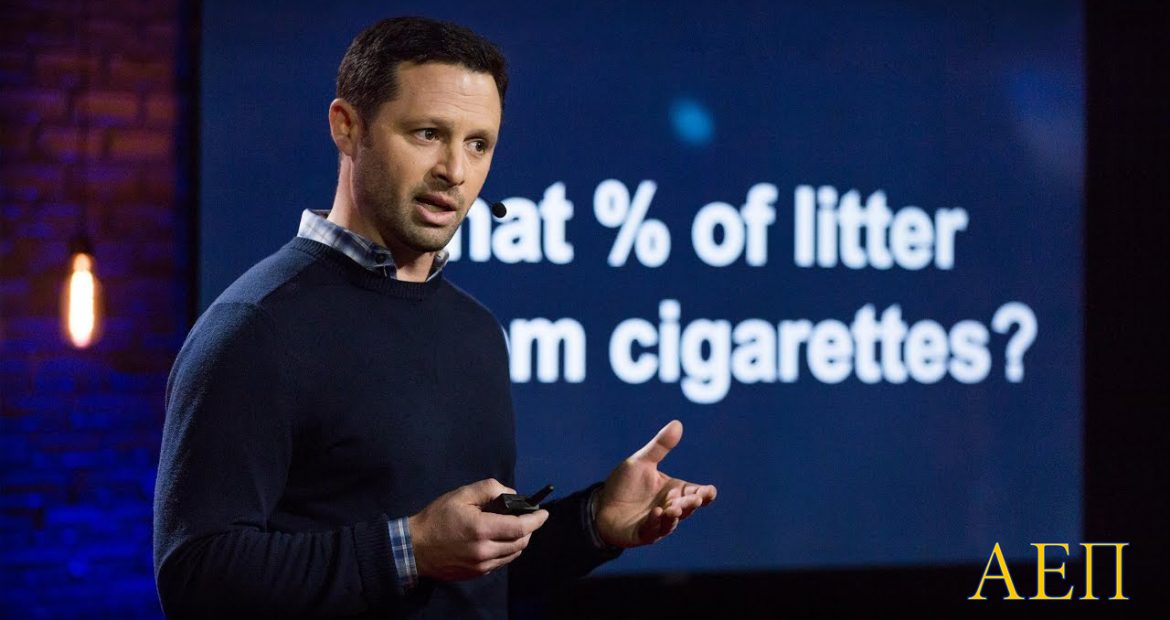 With Earth Day coming up next week, it’s time to discuss the elephant in the room: climate change. It’s something the world has begun to turn its attention to, focusing on how we can stop greenhouse gases, trash and toxins from choking the planet and ending life as we know it. In 2015, National Geographic found that a staggering 5.25 trillion pieces of plastic debris float in our ocean. While that number continues to climb every day, many may feel hopeless in the grand scheme of things and how they can contribute. That’s why Brother Jeff Kirschner (Michigan, 1994) created Litterati, so that together we can create a litter free world by crowdsource-cleaning the planet one piece at a time. Users simply have to download the app and add pictures of the trash they pick up. When uploaded, the photo is identified, mapped and catalogued using geotagging. Data collected is then used to work with companies and organizations to find more sustainable solutions.

“This global litter database has helped us pick up nearly 3 million pieces of trash around the world. We’re working with cities who want to understand what is lying on their streets and beaches. We work with brands and environmental groups who want to mobilize cleaning the planet. We’ve even started working with schools because there’s no better place to start educating than with our kids.”

The idea of Litterati came to Brother Kirschner on a walk through the woods with his children. “My four-year-old noticed a plastic cat litter tub in the creek and told me, ‘Daddy that doesn’t go there.’ That was an eye-opening moment for me.” This reminded him of when he was a kid and went to summer camp at Brant Lake. The camp director would tell them to go out and pick up five pieces of litter. “You’d have a couple hundred kids picking up five pieces and it was a much cleaner camp. I wanted to apply that crowdsource-cleanup model to the world.”

It started with a photo of a cigarette butt on Instagram in 2012 paired with the hashtag, #litterati. He posted the photo and threw away the butt, then took another photo and later another. After one week, he noticed litter more and had upwards of 50 photos on his phone. “I knew I was making a difference on the planet because it was 50 less things that other people would see or an animal would pick up.” He started telling others what he was doing and went from taking on the challenge alone, to building a community in 115 countries. Litterati was launched on Earth Day for iOS in 2016 and Android in 2017. “I think we’ve struck an emotional cord with people around the world. Litter is something that is easily a forgotten problem. It’s beneath us, literally, but yet it impacts us all. It’s become so much of a problem that we don’t notice it, litter just blends in. We wanted to use technology and data to bring litter to the forefront.”

Litterati has been recognized by CNN, Business Insider, Time, National Geographic, Rolling Stone, USA Today and more. Brother Kirschner also had the opportunity to give a Ted talk about it in 2016. “We just launched a global campaign with Levi’s and are working on another project with Lipton. Litterati is really starting to ramp up, but we’re just scratching the surface.” He has found that his AEPi Brothers have also been a huge help in pushing out the mission. “There’s a number of them that have provided a lot of help in spreading awareness. I’m close with some guys from Michigan who have big social networks that they’re sharing Litterati with. One thing I’ve learned [from AEPi] is that you can pick up the phone 20 years later and it’s like you saw them yesterday.”

Data collected by the app is meant to inform better policy, influence better packaging and inspire personal responsibility. He feels that if you want a litter free world, you need government to play a role in creating policies to protect it, you need industries to create better packaging and you need everyone to take better responsibility. ”I feel that we have an opportunity at our hands and if we can play a role in contributing to solving the problem that affects us all, it makes me proud. Litterati is meant to be a fun and simple, yet sophisticated experience for all. The only challenge is changing people’s behavior.”

“People always feel overwhelmed and like they can’t make a difference. Individually, you can make a difference and together we can make an impact, Download the app and join the community. You don’t need to go on an expedition to create change with litter. You can walk out your door and immediately become part of the solution to this problem.”

Find the app in the Apple or Google Play store.