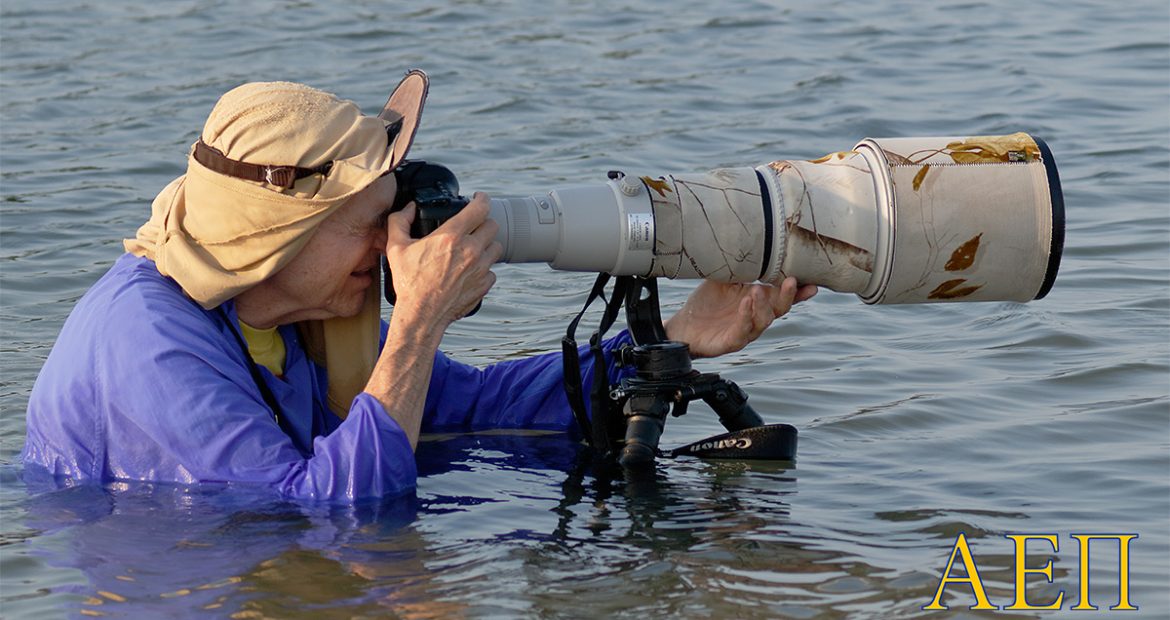 To many, he’s known as the grandfather of modern bird photography. At 72 years old, Brother Arthur Morris (Brooklyn Poly Tech, 1968) just prefers to be known as the father. As a freelance nature photographer and writer specializing in birds, Brother Morris has been regarded as the world’s premier bird photographer and one of the top nature photography educators of our time. Exhibits of his artwork have hung throughout the United States and he has had more than 20,000 images published in magazines like National Geographic, Ranger Rick, Bird Watcher’s Digest and more. In November, he finished an excursion to Antarctica to photograph a colony of emperor penguins.

“Photographing the emperor penguin was high on my bucket list. Most people who bird on the planet won’t have the opportunity to see the species unless they get down into the ice. I’ve done three trips to Antarctica before and only seen one emperor penguin on an iceberg, but the chance to go to the colony is super rare.”

Brother Morris’s passion for photography didn’t start as a child, and wasn’t something he developed until he was in his 30s. “My complete photographic education was one class on Tuesday nights in 1984. I figured everything else out on my own and was relentless in asking questions and understanding others who were better than me.” What sparked his interest? It all began as a bird watcher (now referred to as birders). He recalls coming off the beach after fishing and seeing a black and white bird skimming across the surface of a small pond once. “I stood there mesmerized for half an hour, it was like watching a tennis match as the bird went back and forth.” He bought a field guide to help him identify the black skimmer that he saw, and that’s what had planted the seed in the beginning.

While many birders focus on identifying as many birds as possible and checking them off their bucket list, Brother Morris was determined to learn more about his subjects. “After six or seven years of birding, I started to get bored. I had seen most of the birds that came through New York State. Two local guys I knew encouraged and inspired me to start taking pictures.” It was his goal to make money as a bird photographer, but everyone doubted him and said it was a risk he shouldn’t take. Five years after that decision, he was grossing $800,000 selling bird photographs and leading tours.

With a love of shorebirds, he decided to focus on them in his first book, Shorebirds: Beautiful Beachcombers. “I’ve seen a few rare ones in New York, but never got a good picture. However, I would rather take a great photo of a robin or common bird than a lousy one of a rare bird.”

His first major photography book, The Art of Bird Photography, was published in 1998. It quickly became a classic how-to work on bird photography and sold more than 32,000 copies. In 2001, he started to notice a change in the demand for stock photos and knew he had to reinvent himself or face a sink or swim situation. “I like to say I was a smart Jewish kid from Brooklyn and saw the handwriting on the wall in the early 2000s. I needed to think of a different way to make money or be out of a job.” He focused on increasing his web presence and writing in his blog.

Why is it so important to him to wake up every day and photograph birds around the world? “I’m not sure, I just love it. I have a fierce desire to do this and I love making beautiful pictures. My motivation is taking a great photo that makes me smile and having my students create images that makes them smile.” Photography is an artform, and one that requires constant reimagining every day. Photographers need to continually reevaluate their surroundings and how they can use them in order to capture those special moments on camera. “One thing that makes a photograph special is creating something that no one else has done before. Take a common bird, you might want to use a different lens or get on the ground to capture spectacular behavior. The background in a photo is often more important than the subject.”

He has two favorite backgrounds when photographing birds: distant green vegetation or still blue water in the early morning. “Branches can be a plus or they can be distracting. Over the years, my style has been clean, tight and graphic. I’m glad thousands of people have tried to do the same with their photographs.” His photos have been honored in several BBC Wildlife Photographer of the Year and Nature’s Best competitions. While he used Canon cameras for a majority of his bird photography, he has recently found a new interest in Nikon. “I’ve found Nikon is great for photographing flying birds. There are plenty of things Canon does better, but I always thought I was terrible at flight photography until I tried Nikon.”

“Getting into the business of bird photography can be hard, but there is an obvious community and network that make each other better. I want to help others become good photographers.” This community is not unlike the community he experienced with AEPi. Brothers taught him about working with others and finding his sense of belonging. “I miss that wonderful closeness and am looking to get back in touch with my Brothers. I do keep in touch with some of them.” Some of his fondest memories in AEPi were with the guys at their house in Brooklyn.

“If you are choosing or changing your career, do something you really love and learn as much as you can about it. I know it doesn’t always work that way, but my success is a combination of passion and a fierce determination to succeed. When people told me I couldn’t do something, that ended up being my greatest motivation. I made it to Snow Hill to the emperors and walked four miles a day because you don’t know what’s going to happen tomorrow.”

You can read more about Brother Morris’s work on his website.