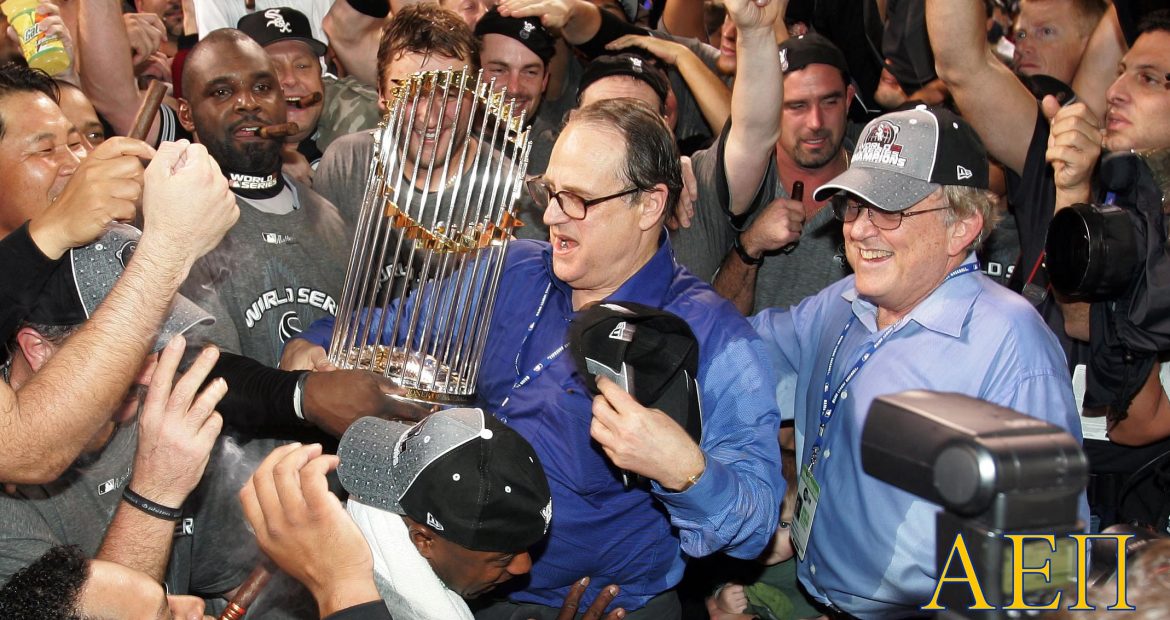 After what felt like a never-ending offseason, America’s pastime is officially back this week. Yesterday was opening day for the 2019 MLB season, and fans have been anxiously waiting to pile into their stadium since spring training began. No one is more excited than Brother Jerry Reinsdorf (George Washington, 1957), who lives to see the happiness of the fans. Brother Reinsdorf has been the owner of the Chicago White Sox since 1981 and the Chicago Bulls since 1985. What’s the secret to his success and legacy?

“I’ve been fortunate and there’s been a lot of luck along the way. While a lot of what I accomplished was the result of my own effort, I had a lot of help from others. As a fan, you get pleasure when your team wins. When you own a team, the pleasure comes knowing you played a part in making so many people happy. That was the best part on the night we won the World Series and when the Bulls won a championship.”

Born in Brooklyn, he was always proud to be from the borough and grew up as a Brooklyn Dodgers fan (until they moved to Los Angeles in 1957). “If you were raised in Brooklyn in the 1940s, you were a Dodgers fan. Baseball was everything in those days. I remember being at Ebbets Field the first day Jackie Robinson played.” Robinson was the first black player in the modern major leagues. There was a sense of unity among those who lived in Brooklyn. The city had its own newspaper, downtown and borough president. He loved the sense of comradery.

This comradery was similar to what he found in AEPi at George Washington University while studying accounting.

“George Washington University was the right place for me, it set the stage for the rest of my life and AEPi played a huge part in that. I didn’t know a soul when I got to school, but I joined the fraternity and my Brothers got me involved in a lot of campus activities.”

He credits his campus exposure with the fraternity to bringing him out of his shell and molding him into a more outgoing person. “They taught me to get along with others and I learned that if you work hard and were honest, people will recognize that.” Kappa Deuteron also saw stunning growth while he was an undergraduate. The chapter grew from nine pledges and 13 Brothers when he joined to more than 100. Both of his sons are AEPi Brothers from the University of Arizona.

Brother Reinsdorf has seen multiple division championships and one World Series win in 2005 with the White Sox. During the Michael Jordan era, the Chicago Bulls won six NBA titles in eight years under Brother Reinsdorf. He was inducted into the Naismith Memorial Basketball Hall of Fame in 2016. “I think the highlight of my sports career was winning the World Series. It hadn’t been done for 88 years.” Championships aside, he loves the tremendous amount of commitment to the ideal of Tikkun Olam that both teams have. “Each team has a foundation. I can’t even begin to list the good that they do for our community, particularly in education.” One example he gave was the White Sox Amateur City Elite (ACE) program, which provides inner-city kids with educational opportunities and avenues to further pursue a career in collegiate or professional sports. “In the twelve years since this program has started, more than 190 ACE players have received a four-year scholarship to college and 21 kids have been drafted into major league teams.”

Success comes with hard decisions, and Brother Reinsdorf has definitely found this to be one of the hardest parts of the job. As the CEO of two major organizations, he has to be able to navigate public relations, plan strategically and fill open positions with people who are good at what they do. “That’s the easy part. In sports, the hard part is not letting your judgement be clouded by what the media or fans think because they don’t have all of the facts. There’s an old saying that if you listen to the fans, you’ll be sitting up there with them.” He does his best to produce teams that the fans can enjoy watching but is cautious to make sure he has all of the facts before making a decision. When asking Brother Reinsdorf if he was ready for baseball season to start his reply was, “We lost 100 games last year, but we have a lot of young quality players coming in. I’m excited to see the growth and looking forward to a much better year this year than last.”