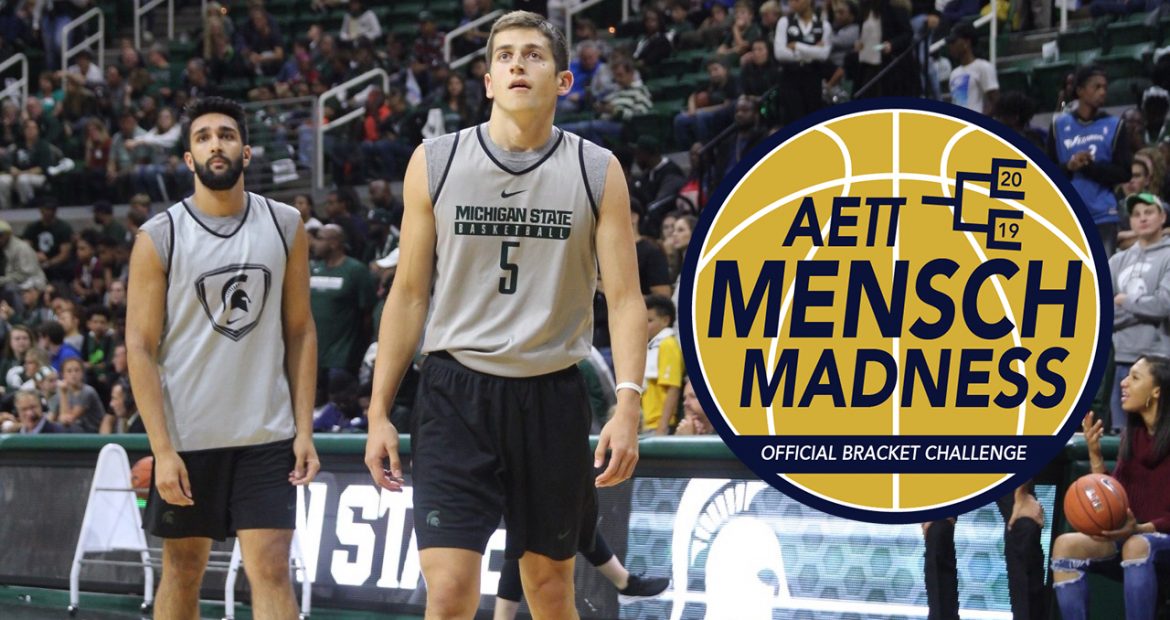 In preparation for Mensch Madness, AEPi’s philanthropic twist on March Madness, we’re going to feature Brothers with a connection to college basketball — something close to the heart of Founding Father Charles C. Moskowitz. Register your Mensch Madness bracket before Thursday, March 17!

Brother Jake Lubotsky (Michigan State, 2021) always performs his best when he’s on the court. For him, there’s nothing quite like the adrenaline rush of being in the action, driving to the basket, hearing the sweet swish of ball meeting net and the roar of the crowd behind it all. Michigan State basketball is a Division I and Big Ten Conference powerhouse, and Brother Lubotsky has the honor of being on both the men and women’s practice team. While basketball had always been a passion of his, he thought his shot at a dream like this was long over. Had it not been for an AEPi connection with the men’s basketball team manager in 2018, he’s not sure he would have had this opportunity.

“One of my pledge Brothers, Eli, was the men’s manager and he invited us to play at the Bres (the Breslin Center where MSU’s basketball teams play) one day. Someone was watching us play and asked Eli who I was, then they asked me to be on the practice squad. Without AEPi and Eli, I wouldn’t be where I am now.”

Things moved fairly quick for him after that. He started with the team at the beginning of this season, practicing every day from October to April. While it’s grueling, he loves every minute of it. “I was cut from my high school basketball team and lost confidence in my ability. While I always played travel and club basketball, it wasn’t the same. I was elated to be asked on the practice team and it shows that those who doubted me were wrong.” While he lives and breathes basketball, he knows now that he should have never doubted himself to begin with.

His AEPi Brothers are an amazing support system. “They understand my life is changing and that I don’t have a lot of time because of basketball. They’re never annoyed and always there for me.” He likes being able to take them to the Breslin Center to shoot on the court once in a while. “A lot of people think you can’t be an athlete in a fraternity, but you can.” Outside of the sport, he goes to Shabbat at Hillel with his Brothers and stays connected to his Jewish roots through AEPi. “I’ve been around Jews my whole life, so it was easy to find friends here right away. I’m grateful that AEPi has given me lifelong friendships and the people I want in my wedding.”

So, what does a member of the practice team do? Depending on who Michigan State is playing next, it’s Brother Lubotsky’s goal to emulate how an opponent would act on the court while practicing against the real team. “The coaches and general assistants on the team put together film for us to watch on our upcoming opponent. They have reports on the players and their tendencies so we know how they act on the court and can duplicate that.” He gets this crash course and then about 30 to 45 minutes to prepare before every practice, with about two to three practices before they actually play their opponent.

While the team is moving into March Madness season, Brother Lubotsky feels that Coach Tom Izzo never falters and expects them all to be driven 100% of the time. “March Madness coming up doesn’t change how we prepare. Every game has the same amount of importance.” He is typically a guard or small forward during practices for the men’s team and a center or power forward for the women’s. With each new assignment, he learns to mimic new people and feels he becomes a better player while also making the team better. “When I see them play against a team or matchup that I helped imitate in practice, it’s fulfilling when they win because it feels like I’m making a difference. Watching them do well shows me I’m doing well.” While he doesn’t travel out of town for games, he has never once felt he wasn’t as much a part of the team.

He hopes that the team wants him to stay for next year’s practice squad. It’s a goal of his to be a walk-on for the team. “If I continue my basketball career, I would love to play overseas in Israel. While I have family there and a love for the country, AEPi has helped grow my support for Israel.” He likes that guys on the men’s basketball team are interested in why he joined the Jewish fraternity and want to know more about his experience. “These are guys who you’d never think would be interested in that but they love to hear what I stand for.”

Brother Lubotsky thinks this is the year that MSU will win it all in March Madness. “We’ll definitely make a deep run. I’d say Duke will be tough to beat if we meet up with them. Duke may have one of the best teams, but it only takes one game to change that. I also think Virginia is going to give a lot of people a run for their money.” Regardless, he believes there’s no reason for you not to fill out a Mensch Madness bracket. “These players have worked so hard to be where they are, they deserve the recognition from fans. Doing a bracket keeps you involved and gives you an incentive to watch your favorite teams.”

“There are a lot of people out there who are put down by others. Don’t get down on yourself because you’re not alone. Look at me, I was cut in high school and thought I was alone because my friends were on the team and I wasn’t. If I could go back, I’d tell myself to never stop playing because if you enjoy it then why stop? Anything can happen, so keep your head high. You’ll get out what you put in.”