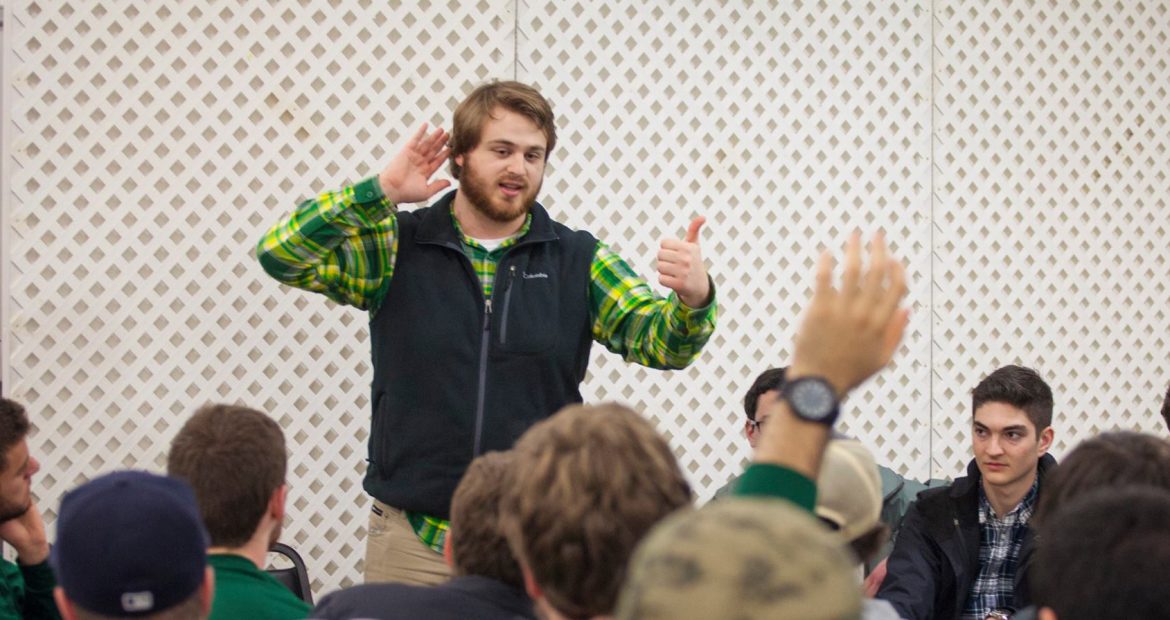 In preparation for Mensch Madness, AEPi’s philanthropic twist on March Madness, we’re going to feature Brothers with a connection to college basketball — something close to the heart of Founding Father Charles C. Moskowitz. Register your Mensch Madness bracket before Thursday, March 17!

March Madness is exactly that. Sixty-eight teams vie to be the NCAA Division I men’s basketball champion, fans flood the stadium, crowds roar at the upset of a twelve seed over a five seed and the whole country — sports fan or not — is fascinated with it all. It doesn’t take a genius to fill out a tournament bracket, which is exactly why Brother Cody Karlin (Oregon, 2014) decided to put his own Jewish twist on it to benefit philanthropy. He currently works in digital marketing, but as Alpha Epsilon Pi’s first director of philanthropy from 2014-2015, he created what would be known as Mensch Madness, the official bracket challenge of AEPi. The idea was simple, brackets were $5 for anyone who was interested and all of the proceeds benefited AEPi’s Official Philanthropy Program (OPP). The winner would receive a travel voucher and the chapter which raised the most would receive a brand-new TV.

The AEPi International staff ran with the idea and raised more than $2,500 in its inaugural year. More than 200 people registered a bracket. Mensch Madness was born.

“The idea of Mensch Madness came to me in college for a completely unrelated event that had nothing to do with basketball. It was always stuck in my mind. We knew chapters were already doing their own bracket challenge, so why not make it one international effort that was bigger?”

Brother Karlin had always wanted to come up with something easy that both large and small chapters and colonies could do to help raise money for AEPi’s Repair the World Fund. “A lot of chapters wanted to do something big but didn’t have the manpower for the logistics.” With Mensch Madness, he was able to lower the barrier of entry for people that didn’t know how to fundraise and who didn’t have an event to call their own. With Mensch Madness, everyone could be a part of the fun. “The bulk of participation in our first year came from small chapters.” He finds it poetic that we are using basketball, something near and dear to Founder Charles C. Moskowitz, as a tool to raise money.

Becoming AEPi’s first director of philanthropy was no easy task. Brother Karlin had to define the role and decide how to continue building philanthropic efforts for Alpha Epsilon Pi chapters across the globe. When he began, AEPi was just finishing it’s $700,000 commitment to seven Jewish organizations. “We were just getting ready to begin our $1 million commitment to ten new organizations and chapters had a lot of questions. I wanted to make things clearer and make OPP and the Repair the World Fund something all Brothers could identify with no matter where they were in the world.” It was important to him that Brothers were giving back to our Jewish organizations. He wanted everyone to feel they could give back to the Jewish world what it had given them. “Judaism has played a role in all of our lives. No matter how a Brother joined AEPi, the Jewish world likely played a small role in getting them here. We are Brothers practicing Tikkun Olam.”

His work with AEPi and philanthropy had, without a doubt, brought him closer to his Jewish roots. He felt it was beyond powerful to watch Brothers from across the world and all different backgrounds working together. “I remember talking to someone at a regional conclave who said they believed philanthropy was the most important thing we do. I was moved to hear that someone who worked hard to put himself through school felt that this was preparing him for life.”

This is one of Brother Karlin’s favorite times of the year. It starts with a post on Facebook and someone will pass around that Mensch Madness has begun. Seeing this interaction on social media shows him how far the philanthropy endeavor has come in four years. “You’re going to do a bracket for March Madness anyway, you might as well put the money towards helping Jewish organizations. There’s no shame in philanthropy, so Brothers should never feel bad asking for money for a good cause. So, what do you have to lose?”

So, what are Brother Karlin’s predictions for this year’s March Madness? “I hope that Oregon can pull it together and be in the tournament but realize the likeliness of that. Tennessee looks strong right now. I love college basketball, so my suggestion would be to pick at least one twelve seed upset and one five seed upset. Don’t pick your winner at the beginning, go match up by match up.”

“I think the chapters that get excited about this will get the most out of it. They’re the ones who put in the most work to spread the word about what they’re doing and why. In AEPi, you’re going to get as much out of the organization as you put in. Plus, it’s so easy to get someone to submit a bracket. No one is really losing by doing Mensch Madness.”