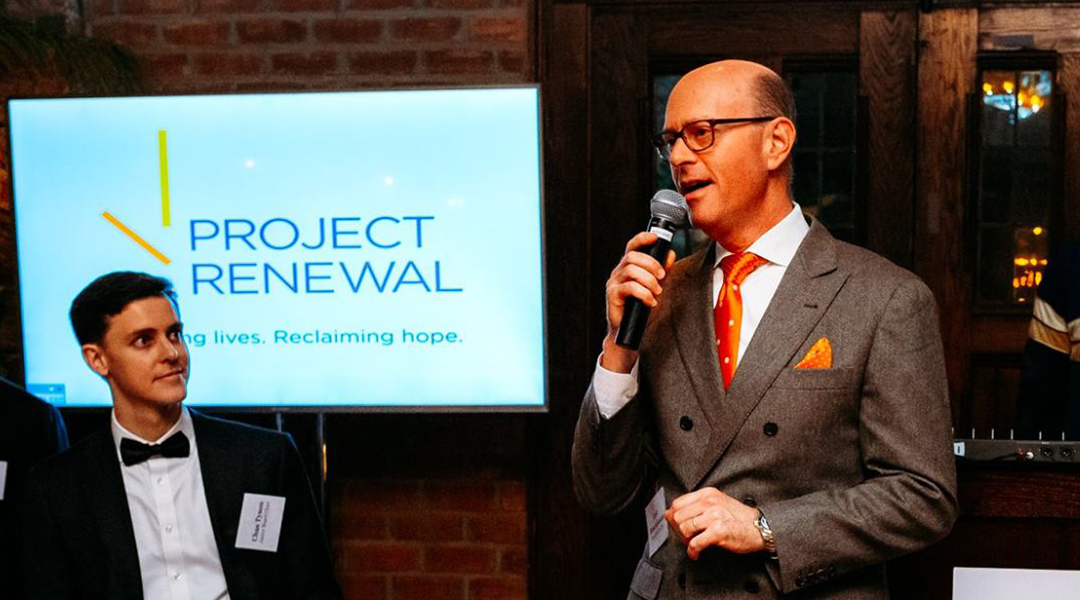 Homelessness is a rising problem in this country that Brother Eric Rosenbaum (UCLA, 1980) hopes to continue fighting. Brother Rosenbaum is the President and CEO of Project Renewal, a non-profit that provides health, homes and jobs that empower adults and families to renew their lives. New York has nearly 60,000 homeless adults and 24,000 homeless children. Under his guidance, Project Renewal provides services to more than 14,600 individuals each year. As CEO, he oversees 900 employees that run 16 sites and 36 programs.

“Homelessness is unresponsive to many solutions and has become a compelling social and civic issue. If we can’t find a way a way to house people, what does that say about us as a society? This is a basic means of social support.”

For more than 50 years, Project Renewal has been one of New York City’s largest providers of comprehensive services for the homeless and those at risk of becoming homeless. “We are always innovating by developing programs that target the emerging unique needs of groups within New York City’s diverse homeless population, including families, LGBTQ young adults, veterans and seniors.” Project Renewal addresses clients’ multiple barriers, including housing, medical and mental health care, job training and placement, and more. Brother Rosenbaum joined the team as CEO and President in 2018, hoping to increase the scale of operations at the non-profit and provide a more sophisticated infrastructure. “I was compelled by the mission, and I believe we should be excellent at both the mission and the business, and that there is no conflict between the two.”

It wasn’t always Brother Rosenbaum’s intention to work in the non-profit world. After UCLA and graduate school, he worked in Boston as a management consultant, and then spent nearly a decade as an executive with consumer products giant Colgate-Palmolive, where he ended up spending three years in India managing the company’s burgeoning supply chain.

Living in India was a life-changing experience for Brother Rosenbaum. While there, he had an opportunity to look at the society he grew up in from the lens of a different culture. “India made me appreciate the Jewish community more. Everyone has such a strong obligation to his or her family and community. I wondered if we could be supportive of individuals achieving their dreams while also retaining a sense of duty and loyalty to the community and people who are there for us.” This ended up being the basis for his career shift into the non-profit world after his return to the United States and immersion in the Jewish community again.

His involvement with AEPi was a consistent thread throughout his post-college years. “I was always close with PSMs Ivan Halperin (Southern California, 1968) and David Bacharach (Old Dominion, 1966). PSM Halperin took a personal interest in me and saw potential leadership qualities that I didn’t even see in myself yet.” In Xi Deuteron at UCLA, he had his first significant leadership role as chapter master. “We were self-governed, running a business and learning from our mistakes and successes.” He was Zeta Deuteron chapter advisor for one year at Boston University. Although he fell out of touch with AEPi during his time in India, he stayed close to PSM Halperin and reconnected to the Fraternity when they formed the New York City AEPi Alumni Association. “Although I wasn’t well connected with Judaism in my early adult life, I am incredibly involved now. Being in AEPi has turned out to be more relevant now in my life than it ever was before.”

Shortly after his return to New York, he went to Congregation Beit Simchat Torah, and made an appointment to speak with a rabbinic intern. “My conversation with her changed my perspective on everything Jewish. I went from someone who stepped into his synagogue once every three years to the president of that synagogue.” Senior Rabbi Sharon Kleinbaum suggested that he pivot his career from a corporate setting to non-profit. Having a leadership position with the synagogue gave him the advantage he needed to obtain his first job with a non-profit in 2007.

Brother Rosenbaum sees Project Renewal as more than just another non-profit to help the homeless. “We make it our mission to serve the most complicated and challenging cases of homelessness in New York. I have a huge admiration for everyone’s work.” While it is a challenge to keep up with the evolving needs of people facing homelessness, he finds it rewarding to see people with a long history of homelessness living in their own apartments, maintaining sobriety and training for and earning the jobs they love. “We will continue to create new programs and services to get people back on their feet.” This year, Project Renewal looks forward to opening New York City’s first diversion center, which will provide the police with an alternative to sending individuals experiencing acute mental health and substance use disorder issues to jail. They have also launched a tele-psychiatry unit to make mental healthcare more accessible. Project Renewal is currently constructing Bedford Green House, their fifth, and most innovative supportive housing development. The organization also plans to open a women’s employment shelter.

“Every person who walks through our door is a success story waiting to happen. Everyone has the potential to renew his or her life and reclaim hope. We are here to offer them the support they need to do that.”

To learn more about Project Renewal, visit their website. You can also volunteer by reaching out to [email protected]

fridaypiday
« The Year in Photos: 2018
Voices: Stand Up and Do Something »