Voices: Why These Brothers are Thankful to Be Part of AEPi 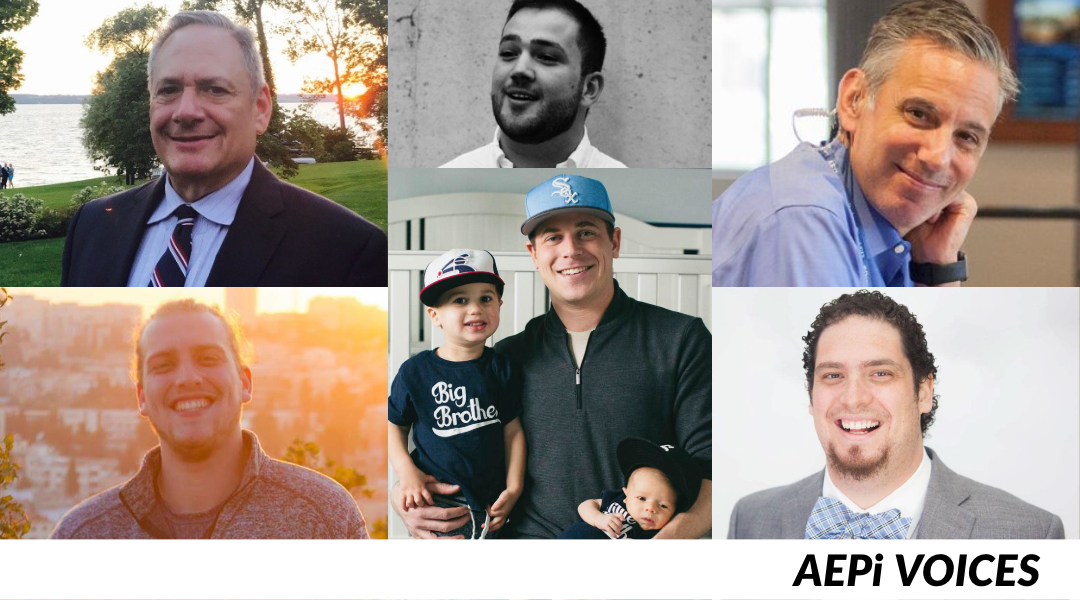 There’s a lot to be thankful for as we head into 2019. Alpha Epsilon Pi reaching a milestone birthday of 105 years, Jim Fleischer taking over as CEO and brotherhood involvement in the face of adversity as we’ve never seen before. There are many situations that make us proud to part of AEPi, so we’ve asked brothers from all over to share some of their experiences: 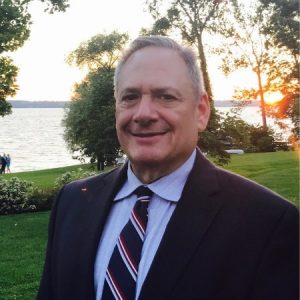 I’m thankful for the lifelong friendships and close relationships AEPi has afforded me. Even 42 years after initiation, several of us are still close, we are there for each other through good times and hard times. We all just returned from celebrating one of my close fraternity brother’s daughter’s wedding in California. One of many opportunities where we come together. Once a brother, always a brother. It’s more than just friendship. 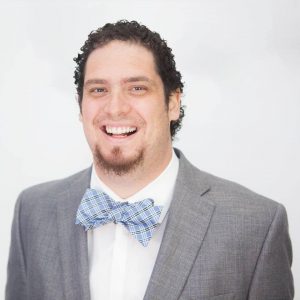 There are are so many reasons why I am thankful to be an AEPi, but there are two stories that stand out when I think about this question. The first, was the first time I realized what I can accomplish with the backing of my brothers and how I can be a voice for the Jewish people. My Sophomore year of college, the Westboro Baptist church protested in Richmond, VA, where I was going to school. They were holding protests at a local high school with a strong LGBT club, the holocaust museum and the Richmond JCC. Myself, along with other Jewish leaders on campus held an Anti-Hate rally on campus on the same day to try and draw people to our event instead of their protest. With the help of my Brothers, we pulled off a rally in our student commons with over 350 people in attendance (the WBC only had about 80). I remember the feeling I got when I walked up to the podium and looked out to the crowd. I knew then, what we, as AEPi, can do for the greater Jewish community.

The second story is much more personal. In January of 2012, during the beginning of second semester my senior year, my mother passed away. It was the hardest thing I have ever gone through. The only way I made it through college while my mom was sick was because of the support I received from my chapter brothers. At the funeral, almost every single brother of my chapter, including alumni showed up to support me. I remember seeing them in the chapel and my knees going weak because I was so overcome with emotion. The thought that they all would take off work and school to be there for me. After the funeral, we all went back to my house to sit shiva. Two shiva baskets arrived, but no one knew from who. The first was from my chapter and the second was from AEPi International Headquarters. People who I hadn’t even met me cared so much about me. To me, that is true brotherhood and these two stories stick out every time someone asks me why I am thankful for AEPi. 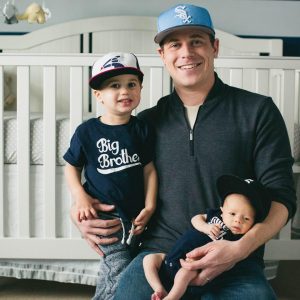 I’m grateful for all the people I met while in the Phi Tau Chapter and working for Alpha Epsilon Pi. My brothers have meant the world to me and are the reason for my continued work with the fraternity. The guys I started my professional AEPi journey with are a perfect example of how and why this is much more than a fraternity. Three guys from different chapters and parts of the country came together over the course of one summer to work for the same ideals and betterment of our fraternity. What is most amazing to me is not only the commitment we made to the organization but the commitment we made to each other. Staying close after our time on the road we decided to make a much longer term plan.

On the last day working for AEPi, we sat and discussed our futures and going separate ways. We felt it was important that we be proactive and never let life get in our way from seeing each other. We decided immediately that for one weekend every year we would get our time together. I am thankful for that night and the decisions we made to look beyond the present. Ten years later we are older, fatter and wiser but still getting our time together.

I think this shows that the bonds of brotherhood last beyond the four years at university. Alumni reunions and gatherings take place all over the world for different chapters and eras of AEPi alumni. This is what makes the fraternity special to me. The people in my life that this fraternity brought me close to are the reasons why I am grateful. 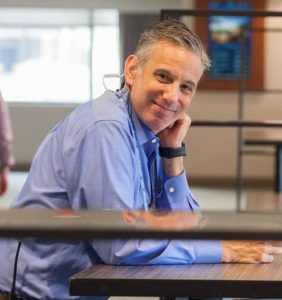 I met my wife working for AEPi in 1994. I had no idea that while visiting a chapter on my first job out of college I would meet my soulmate. The ability that this organization has to continually surprise me is beyond comparison. It’s what makes AEPi so special: it transcends brotherhood. Our “social club” simply goes beyond expectations no matter what the situation, providing us with Jewish life lessons and experiences that mold us into the leaders we are today. Because of AEPi, my wife and I have raised our family to become the next generation of Jewish leaders. That’s why I’m thankful to be part of AEPi. 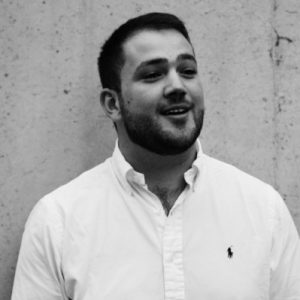 AEPi has taught me about the importance of fostering and developing relationships. This hit me during my time as master, where I delayed giving a bid (to a now brother) as I wasn’t sure he would be the right fit for the chapter. Truth be told, I just didn’t spend enough time talking to him during rush as I was confident in my own instinct.

Fast forward four years and this brother turned out to be one of my closest friends, who has enabled me to have a unique perspective on life and value what different people, even in your own circle, can bring into your life.

I am forever thankful for the opportunities that AEPi has given me, both as a student and staff member, servicing AEPi’s international groups. AEPi truly delivered a unique experience to my life that I will ensure is continued through current undergraduate brothers during my volunteering role.

Huge thank you to Andrew Max, my ELC whilst I was rush chair and roommate for giving me the tools to succeed and instilling in me the true potential that AEPi has to offer. 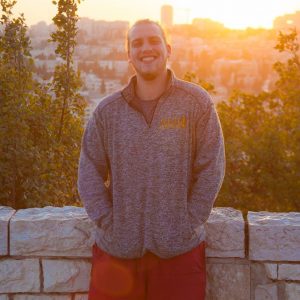 Saying that I am thankful to be a part of AEPi is an understatement. When you’re in college, it’s hard to see just how much more there is to AEPi and being a brother other than just those four years in college. You don’t really realize that there is so much more to our fraternity beyond the college life. Without a doubt, I can say that I would not be where I am today and accomplished what I have without being a part of this fraternity. I was a leader and ran one of the largest student organizations on Virginia Tech’s campus as an undergrad because of a fellow chapter brother, I got my first job out of college working for AEPi International Headquarters because of a fellow chapter brother, I co-founded a company with a fellow chapter brother, and my next job after working for IHQ was because of a fellow brother of AEPi. The pure amount of friends that I have made, brothers couches slept on from every country represented from all over the world that I am now able to sleep on whenever I travel is all because of AEPi. So again, saying that I am thankful for being a brother of AEPi simply does not do it justice for all that AEPi has given me. AEPi is like a gum ball machine: you only get out what you put into it. 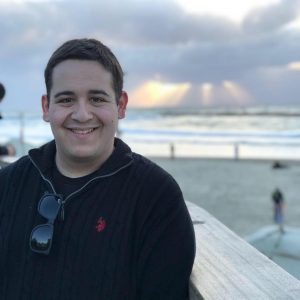 On morning of October 27th, tragedy struck the Jewish community when a neo-Nazi opened fire on congregants in Tree of Life Synagogue in Pittsburgh. At the time, I was sitting in a board room in Indianapolis attending AEPi’s Supreme Board of Governors Meeting. As it was my first meeting as an Undergraduate Supreme Governor, I could not be more excited. Yet, things quickly changed.

Upon the news of the attack going national, all of us at the meeting were in shock, but immediately sprang into action. Within a matter of minutes, the board had called our brothers at Carnegie Mellon and the University of Pittsburgh and began taking steps to ensure the safety of all of our chapters. I called to make sure my loved ones in Pittsburgh were safe. Upon breathing a sigh of relief that all brothers and family were okay, we made plans to mourn the 11 people who lost their lives that day. That evening, we held a Havdallah service and said Kaddish together.

While this was happening, I did not give much thought into what we were doing. It seemed as though we were following any organization’s standard procedure. However, in reflecting back on that day, we were doing anything but. To think that in a matter of an hour we had checked in with hundreds of brothers, put out a statement to thousands of Jewish leaders across the country, and planned an event to honor those lost is pretty remarkable. Yet, it’s hardly
surprising.

As brothers of Alpha Epsilon Pi, that is what we do. When the Jewish community is in need of immediate action, we take it head-on. And we do so proudly wearing our letters for all to see. In my own chapter at Cornell, with acts of anti-Semitism occurring on campus just this week, we instantaneously began planning a response. For many, this may seem like a burden, but, to us, it is why we are here. Whether it be providing a home for Jewish men on our campuses, operating a network of over a 100,000 brothers across the country, donating over $1 million to incredible organizations, or helping the State of Israel, Alpha Epsilon Pi is able to do it all.

When I rushed AEPi a little over three years ago at Michigan State University, I thought the organization would give me a way to make friends and have fun on the weekends. I can proudly say that AEPi has done so much more for me than that. Therefore, this Thanksgiving, I am thankful to all that AEPi has given me. From helping me get involved with an incredible brotherhood at Michigan State University, join another amazing one at Cornell, work with many pro-Israel organizations, travel to great conferences/conventions, and join a national board of directors, this fraternity has allowed me to enhance my college experience by unquantifiable bounds. More importantly, though, AEPi has ensured me that the future of the Jewish community is strong, and will only grow stronger, so that even when tragedy strikes we have brothers ready to help the Jewish community.

So … why are you thankful to be part of AEPi? Let us know by mentioning @AEPi on twitter. We hope everyone enjoys their Thanksgiving!