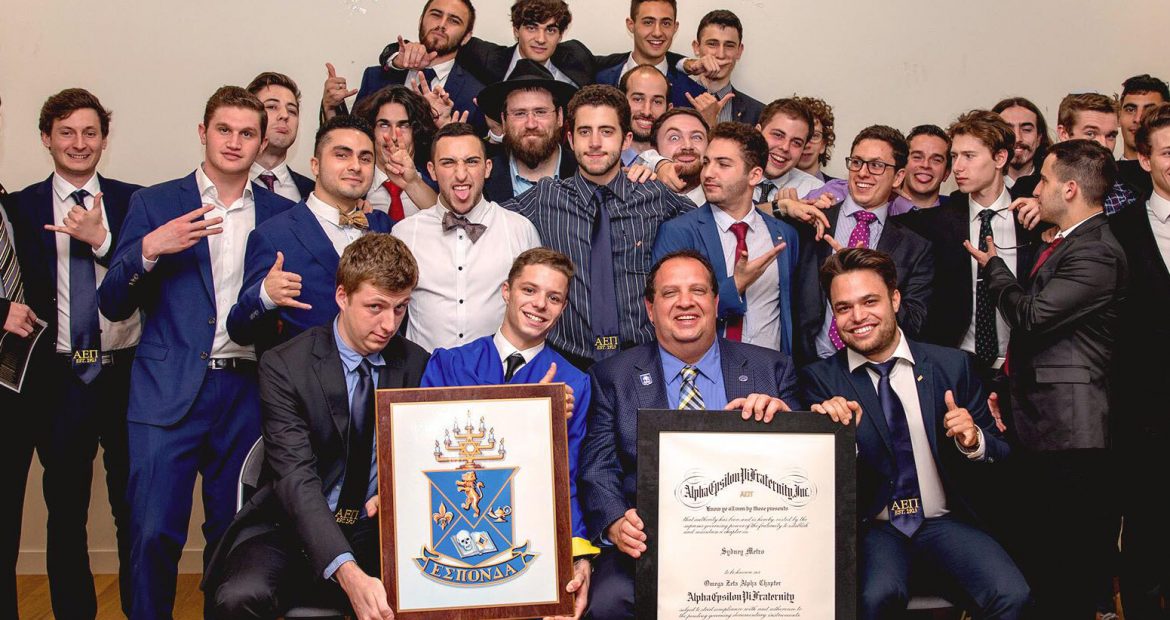 The 2018 fall chartering season has kicked off with the Iota Beta colony receiving its charter on Saturday, Oct. 6. A colony is started when an interest group at a school where we do not have a chapter contacts us. These men work hard as a colony to meet specific expectations that allow them to be considered by the Supreme Board of Governors for their charter, making them an official chapter of Alpha Epsilon Pi. This semester, seven groups which have worked tirelessly to bring a Jewish home to campus will have the honor of receiving their charter from the Supreme Board of Governors.

Campus officials, parents and students gathered at Illinois State University’s Bone Student Center to celebrate the re-chartering of the colony with the Brothers. The chapter was originally chartered in 1983. Chartering Chairman Brett Kozin (2020) felt the highlight was not only receiving their original charter back, but many of the composites and other knick knacks that were taken when the group closed in 2005.

“My mom was a chapter sweetheart in the 80s and has a photo in front of the house with an AEPi sign we thought was lost. We were more than ecstatic to find that it was in storage all this time and being given back to us.”

While most of Fraternity & Sorority Life (FSL) on campus was away on a Greek retreat that weekend, it was almost better having a smaller, more intimate gathering of those who cared for the Iota Beta chapter. The campus Hillel Director addressed attendees about the importance of AEPi on campus. “Hillel talked about Jewish life on campus and how AEPi has been there for Hillel and helped double their attendance in the last year,” said Brother Kozin.

Illinois State’s FSL Coordinator Alex Snowden expressed his excitement about finally having the group chartered after eight years on campus. Being Jewish, he had been waiting for this moment since the new group started in 2010. He also noted how Iota Beta plays by the rules, doesn’t get in trouble and is a fine contributor to campus life.

While this moment was special for founding fathers who returned and Brothers who have worked hard, no one had to work harder to put on this event than the Chartering Chairman. “Putting this event together was special for me in many ways. I told our alumni that they were the reason why I got involved in this and that if anyone deserves recognition for us getting to this point, it was them. It was their hard work that got us this charter.”

Mazel tov to the Iota Beta chapter on this achievement. Check back for more chartering updates throughout the semester!

Coincidentally, on the sixth night of Chanukah our sixth chartering ceremony of the semester was held at Delta Gamma chapter at Grand Valley State University. On December 7, more than 130 Brothers, parents, friends and guests came together to celebrate. After lighting Chanukah candles and saying prayers for Shabbat, Chartering Chairman Ben Friedman (2020) opened up about the stereotypes and labels he faces every day, including being Jewish. “Everyone [in AEPi] shows me an extremely high level of patience. For the first time in my life, I feel like my voice matters.” University President Thomas J. Haas and Dean of Students Dr. Loren Rullman were among the special guests in the audience. President Haas made note of Delta Gamma’s dedication to service, congratulating the five chapter Brothers who are student senators. He said, “You’re involved, engaged and exhibiting the best of Grand Valley as well as fraternity and sorority life. You surpass your mission, making our community stronger.” Dean Rullman had a similar message, saying that Delta Gamma colony serves as a learning model for what other fraternities and sororities across the country should look like.