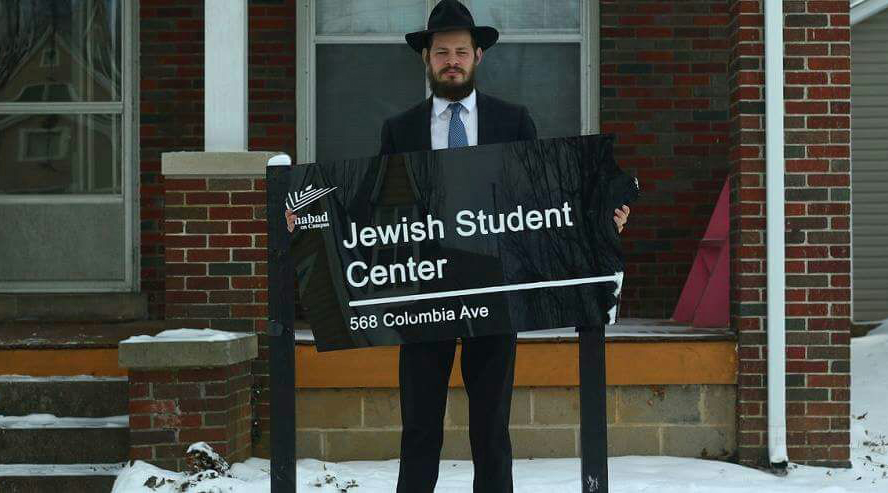 Rabbi Shlomo Litvin (Tomchei Temimim) has dedicated his life to educating and empowering young Jewish students to have pride in — not fear of — their heritage. Brother Litvin currently runs Chabad of the Bluegrass and the Jewish Student Center at the University of Kentucky in Lexington. Facing three anti-Semitic incidents in the last three years, he has looked for the light in every dark situation. In January, a group of students vandalized and broke Chabad’s welcome sign. Rather than letting the situation hinder students’ Jewish pride, he made the best of the situation.

“One of the hardest things to do was find a way to explain what happened to my oldest child, who is only two years old. I picked up the sign, made cocoa and took my daughter sledding with it. These negative situations aren’t what we hope for, but you have a choice on whether to let the negativity define you.”

A top priority for him is making sure students don’t feel marginalized. The incident allowed Jewish students to speak up and non-Jewish students to express how troubled they felt that this happened. “No one wants Kentucky to be seen like this. It’s not about changing the narrative, but rather the negative. There was a tremendous outpour of unity and solidarity.” Brother Litvin only found himself driven to create more programs in the community while building new relationships and allowing students to have a space to express. “I want Jewish students to have a home away from home environment where they can be openly Jewish and proud.”

From a young age he was taught the ideals of spreading Judaism, unity and outreach by his parents. After visiting Israel for the first time, he fell in love with the country and knew he wanted to go to rabbinical school there. “My plan was always to come back to Kentucky and help the Jewish community in any way I could.” Brother Litvin kept his promise and moved to Lexington after graduating, where he eventually became involved with Chabad on Campus. “I don’t find anti-Semitism to be as much of a problem on campus as Jewish identity and students knowing what a Jew is.”

While the University of Kentucky currently does not have an AEPi chapter, Brother Litvin looks to change this in the near future.

“AEPi is a natural ally of Chabad. I have a deep appreciation of the effect the fraternity has on students and can always count on AEPi brothers to be invested and willing to try anything when interacting with them.”

Working with vocal and proud Jewish leaders like AEPi brothers from the community has made him a fierce proponent of the fraternity. “I always find our strongest community leaders to have ties with AEPi.”

No matter the circumstance, there’s nothing that will drag him away from his work in Kentucky. His goal is to continue encouraging students to have pride in Judaism whether that’s leading more discussion or having twice as many people involved in events that Chabad hosts. This is why he looks forward to the return of an AEPi chapter. “Our fraternity enables the mission of life to lift the mundane. AEPi does this with any event they host, because one of the true beauties of incorporating a Jewish brotherhood is that whatever you do together becomes a Jewish activity.”