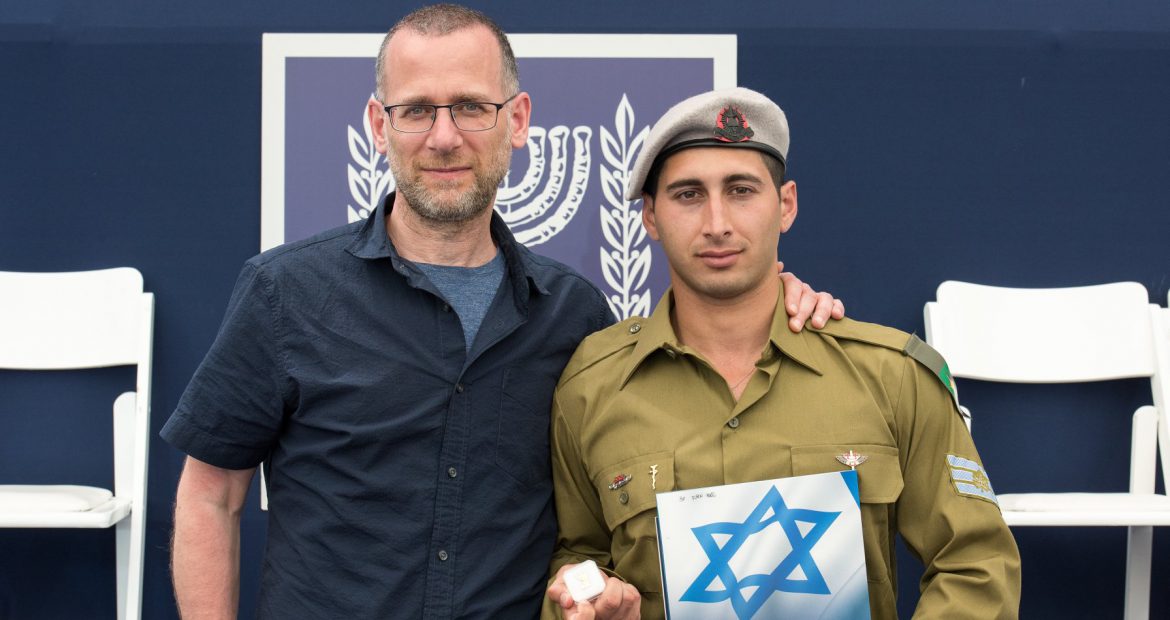 Sagie Madnick (Massachusetts, 2014) is a dedicated Israel Defense Forces (IDF) soldier who has given the last two years to serving and protecting the country of Israel and her people. Brother Madnick enlisted in the Combat Engineering Corps in March 2016 after making Aliyah. He trained and now specializes in heavy weapons operations. Today, he is a combat medic in the Adir Company for the 601st battalion and was recognized with the Presidential Award for Excellence on Yom HaAtzma’ut. The Israel Independence Day event took place at President Reuven Rivlin’s residence and was awarded to 120 IDF soldiers. Israel’s Prime Minister, Chief of Staff and Minister of Defense were in attendance. The letter is awarded to those in the IDF who have shown exceptional performance and are at the top of their field of expertise.

“Winning this made me realize how many people fall through the cracks because there are so many hard-working soldiers with exceptional abilities out there that don’t get recognized. I’m honored to be a recipient.”

While Brother Madnick has had a tough service and endured an injury that hindered his ability to advance into a special operations unit or commander’s course, he’s made the best of it. Always doing extra work without being told, it’s no surprise he was nominated. Recommended by his commanding officers, they wrote that he exhibited profound professionalism, sociable characteristics and other behaviors that are considered. “I couldn’t have done this without the people I’ve served with. Being chosen reminded me there was a reason I left everything behind in the U.S. and that credibility is given when it’s due.”

After receiving his degree from UMass, he decided to make Aliyah. “It was a gut feeling and something I’d always wanted to do. I told myself if I didn’t do it now, I would regret it for the rest of my life.” Garin Tzabar provided him with the opportunity to enlist quickly and helped him make Aliyah. Brother Madnick notices the similarities between a fraternity like AEPi and the IDF. “I thrive on the camaraderie, Jewish identity is embedded in the culture here and you’re always a part of that culture, no matter what. I’m proud of what I’m doing.”

He joined the Phi chapter to get the full college experience. “Similar to the IDF, I always felt like I could fall back on my brothers if needed. This is brotherhood for a lifetime and I don’t regret my decision to join.” When brothers from UMass go on Birthright Israel trips, he’ll take his breaks to visit them. “The fraternity has a strong connection with the country and I have pride bridging a connection between American Jews and Israel.”

After his service is over, he hopes to study for the GMAT and pursue his master’s at Tel Aviv University. After receiving his bachelor’s degree in Natural Resource Conservation, he decided to work on bridging the gap between environmental conservation and business. For now, he finds it rewarding to protect his comrades and family. “I can’t thank everyone enough for helping me be the best that I can. I’m fulfilling my goals and challenging my personal boundaries, which is another reminder why I love it here.”

“I’m happy that the IDF and AEPi are intertwined with one another and want to give a shout out to the brothers of Phi chapter, who are a great group of gentlemen. I’m excited for their future and look forward to hearing what they’re up to.”