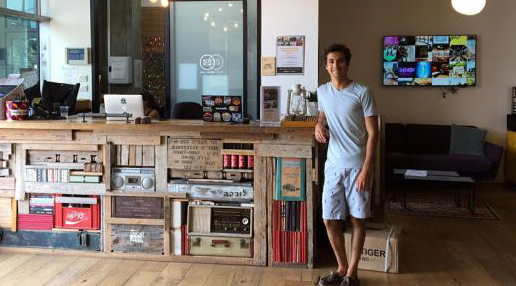 Studying abroad and traveling to a foreign country can be scary for some, but Brother Jesse Yaker (Michigan State, 2018) embraced the opportunity in summer 2017.  After going on a Birthright Israel trip two years ago, he fell in love with the country and could not wait to be back. He looked into Michigan State’s study abroad program and found an internship opportunity through Tel Aviv University. Once he was accepted, he prepared to spend seven weeks in one of the world’s most high-tech cities. He worked for Lingui, a start-up company that was founded to teach English to children.

“I knew this program would do the most for me and it was highly regarded. The best part was that I was doing it all in Israel, which is what I wanted. I was ecstatic to be chosen.”

While the company he worked for had no relation to his major in school, he still enjoyed the idea of teaching English. Brother Yaker speaks fluent English, Hebrew and French. “What amazed me was working with kids who don’t speak English. It taught me a lot of life-skills that I know I’ll need later in my profession.” Lingui was launched in 2014, so it’s still a young start-up. Teaching all classes by herself, the CEO put her heart and soul into the company. “She dealt with kids so personally and everyone was more than welcoming. We were there to help each other learn.”

For Brother Yaker, living in a foreign city is one of the most exciting parts of studying abroad.. “Tel Aviv is so unique compared to big American cities, there’s so much to do. It was interesting to see everything close on Shabbat.” He enjoyed seeing the various cultures of people and always felt a sense or urgency when walking around. “While this can make you feel disconnected, it still felt like everyone was looking out for each other.”

In his opinion, everyone should take an opportunity to study in Israel. He looks forward to taking the skills he learned and applying them to the rest of his life. “Tel Aviv has so much to offer and I learned more there in one summer than I ever could have here at home. Every Jewish person should make a trip [to Israel] at some point.” His office was in a WeWork space, so there were multiple companies working in close proximity to him. He spent his free time shadowing legal businesses and reviewing contracts. “The networking opportunities were incredible. I’m still in contact with these people and ask them for advice all the time.”

Though he had fun, he could not wait to get home to his family and AEPi brothers. Growing up in a predominantly Jewish neighborhood fueled his desire to be in the Jewish fraternity. “I knew I made the right choice with AEPi. It was the one fraternity where I felt like I belonged.” He has served as chapter master and house manager and also sits on the judicial board. “ Whether you’re on executive board or just a brother, you’ll have responsibilities in the chapter. Taking on these responsibilities has made a huge impact in my life.”

The highlight of his internship was going through a review on the last day. He had the chance to sit with the CEO and hear from her about his progress. “Hearing her say how much she appreciated my work gave me pride in what I learned. Knowing I was able to help her and her mission was inspiring.” Though he had some challenges adjusting to the culture, he was proud to say he handled himself in a foreign country and made the most of his experience.

“Studying abroad can be scary, but take the chance! Be confident and make the best out of every opportunity you’re presented with. I was nervous going into my trip, but I cannot stress enough how much I recommend doing something like this.”