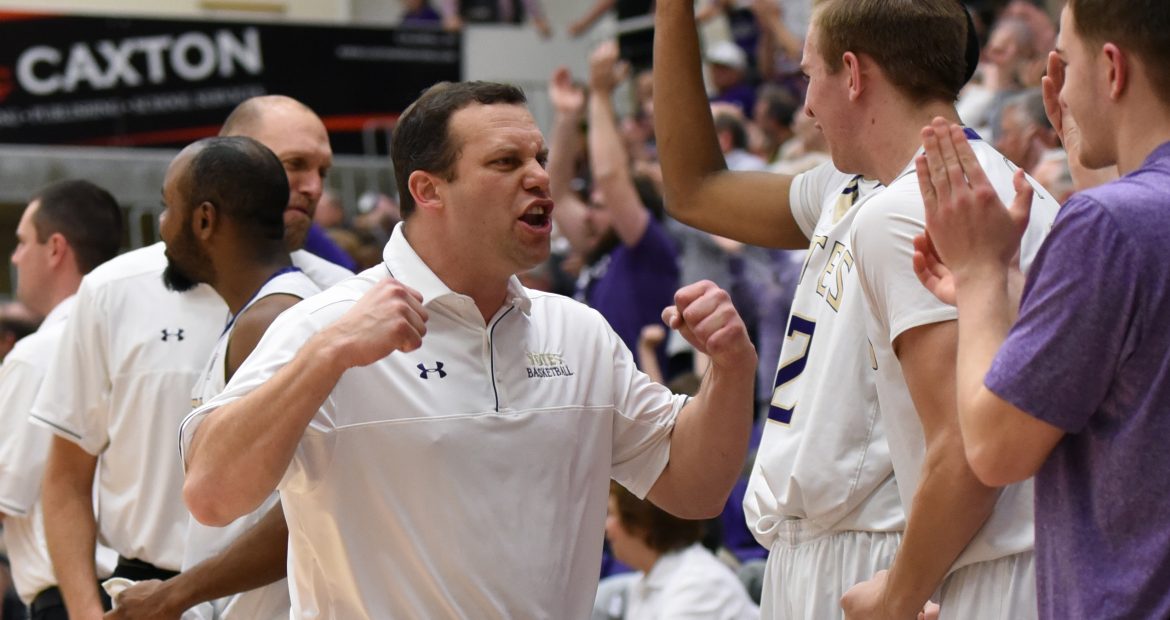 In preparation for Mensch Madness, AEPi’s philanthropic twist on March Madness, we’re going to feature brothers with a connection to college basketball — something close to the heart of Founding Father Charles C. Moskowitz. Register your Mensch Madness bracket before Thursday, March 15!

In his five season with the College of Idaho men’s basketball program, Scott Garson (UC Santa Barbara, 1998) has led the Yotes to a 123-41 record, three Cascade Collegiate Conference (CCC) championships, two CCC tournament championships and five playoff appearances. Off the court, he has dedicated his time to the team and community, which in turn has doubled home game attendance.

“Everybody faces adversity, whether it be in their professional or personal life. I’m fortunate to have an amazing job. There are 220 head coaches in the National Association of Intercollegiate Athletics (NAIA), and I’m one of them. I’m in a place where I’m supported and my goal is to keep doing the best that I can.”

Originally contemplating going to law school, Brother Garson served as an assistant coach for a Santa Barbara high school team during his junior and senior years at UCSB. As he began to realize this was his passion in life, he ditched the idea of law school. “I recognized that coaching would allow me to have an impact on young people while doing something I loved.”

Following graduation, he spent a year volunteering at Pepperdine University doing anything and everything they asked, which allowed him to get a graduate assistant job at the University of Utah while he pursuing his master’s degree. He spent five years there learning the ins-and-outs of coaching and gained an incredible work ethic. “In college basketball, you don’t get paid millions. We have a passion for what we’re doing. I learned about film breakdown, scouting, game preparation and more.”

In 2004, his big break came when he hired as an assistant coach at UCLA under Coach Ben Howland. “Working under Howland was a great opportunity because UCLA is one of the all-time programs in the history of college basketball.” He recruited and interacted with players like Russell Westbrook, Kevin Love and Zach LaVine before they were drafted for the NBA. After working with UCLA for nine years, he searched for head coach positions, which led him to the College of Idaho, and the rest is history.

Considering everything he has built, he is most proud of the fact that nearly every player has earned a degree. He wants them to be true student athletes, so their studies are a priority. “The pursuit of their degree and work in the community as leaders are more important than any games won in my eyes.”

Joining the Sigma Beta chapter taught Brother Garson how to lead, work with a team and achieve a common goal. “AEPi did more than enhance my college experience, it became one of the main impacts on my ability to be a successful college coach. Working for the basketball team definitely has its similarities to being in AEPi.”

One of his biggest responsibilities is recruitment, and just like rush, it’s extremely important to a basketball program. “I could be the greatest coach in the world, but if we don’t recruit good players I’m out of luck. You’re trying to mold a team and build a singular unit.”

When it comes to making a Mensch Madness bracket, Brother Garson’s word of advice is: “I’m actually thinking of just going through and picking by which mascot I think would beat the other. There’s no good way to predict who will win, but enjoy the heck out of it and don’t miss out!”

Support your chapter by registering your Mensch Madness bracket(s) before Thursday, March 15!

This Saturday, March 10, the Sigma Beta chapter is celebrating its 30th anniversary at the Glen Annie Country Club. Come reminisce with brothers from all generations. Get your tickets today!