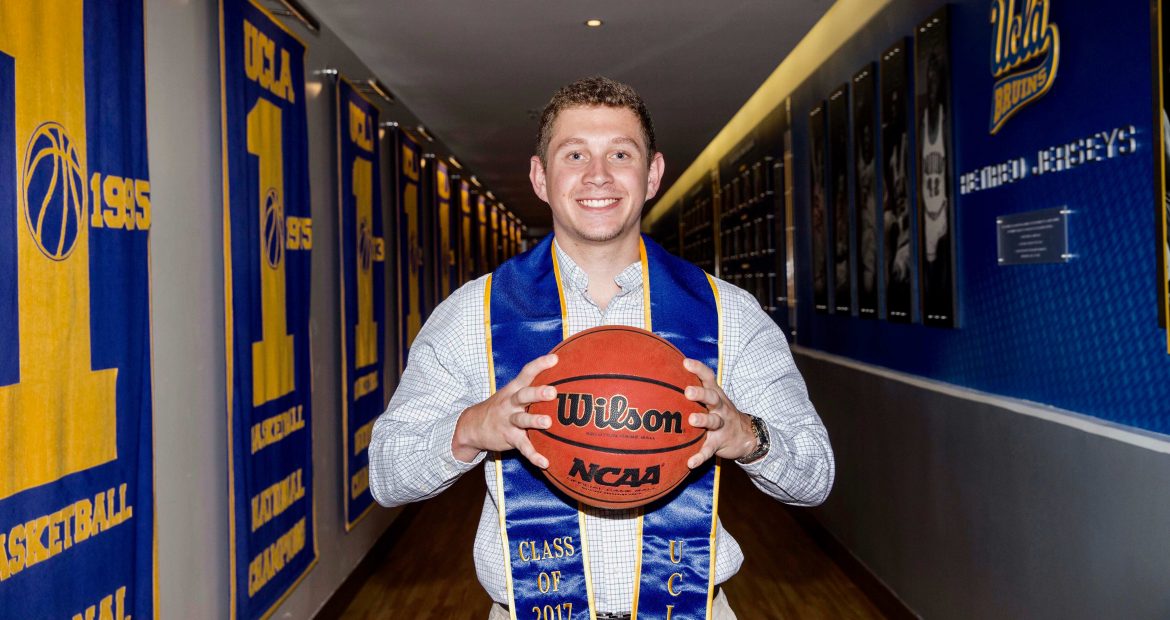 In preparation for Mensch Madness, AEPi’s philanthropic twist on March Madness, we’re going to feature brothers with a connection to college basketball — something close to the heart of Founding Father Charles C. Moskowitz. Learn more about Mensch Madness.

Growing up, Jonathan Gilmore (UCLA, 2017) always knew he wanted a career in sports. When he got to UCLA, he became the head manager of the men’s basketball team which eventually led him to a position with the Charlotte Hornets.

“Knowing when I wake up in the morning that I’m going into work and it’s something I enjoy is an amazing feeling. Everything is interesting to me and I’m learning new things about the world of basketball every day.”

While playing intramural basketball his freshman year, Brother Gilmore met a friend who was a manager for the men’s basketball team and urged him to apply for the open team manager position. His friend’s recommendation landed him the job in fall 2014. As team manager, it was his responsibility to help with drills in practice, take stats, organize equipment needed by players and help with video. In June 2016, Brother GIlmore took over as head manager and held that position until his graduation the following spring.

He found nothing but support throughout college from his Xi Deuteron chapter brothers. “Being in AEPi was a great experience for me. It not only established a group of friends, but showed me I always had people I could rely on.” His chapter experience molded him into the leader he is today.

“Having the opportunity to be head manager was an incredible opportunity. I started to realize that I could continue on with my degree in economics, but I wouldn’t enjoy it every day.” He searched for ways to get into the front office or basketball operations after college. While working for UCLA, he had the opportunity to travel with the team and even go to Australia. “It was all about making connections. I tried to reach out to people and get my name out there hoping I could turn it into a position.”

His big break came in September 2017 when the Charlotte Hornets hired him for the season as basketball operations intern in the front office. He typically works on projects dealing with scouting and salary cap. “It’s been great working for the Hornets. I enjoy seeing how the front office works because as a kid, you always wonder what’s going on there. Having this first-hand experience has cemented the idea that I want to continue to grow in this industry.”

Brother Gilmore finds that you work with all kinds of different personalities in basketball. “You get to know each person and build those relationships into trust with one another. In this industry, you need to trust everyone you’re working with.” His ultimate goal to become an executive or eventually the general manager of a team. For now, he plans on continue working with the Hornets and embrace the challenging transition from working in the NCAA to the NBA.

“Working in basketball at both the collegiate and professional levels has been an enriching experience. My time with both teams has shown me the value of hard work and giving your all at opportunities that are presented.”