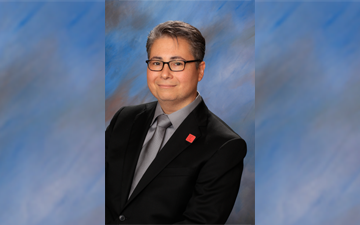 Every four minutes someone is diagnosed with blood cancer. In 1991, Brother Jay Feinberg (Dickinson, 1990) was a 22-year-old foreign-exchange analyst for the Federal Reserve in New York when he was diagnosed with leukemia. His only hope: a bone marrow transplant.

When a match was not found in Brother Feinberg’s immediate family, his friends and relatives widened their search among Ashkenazi Jews.

“The best chance of finding a genetic match lies with donors of similar ethnic background. With an unequal representation of ethnic groups in the registry at the time, there was an urgent need to add diversity and improve the chances that Jewish patients like me would find genetically-matched donors.”

Massive screenings were organized in Jewish communities throughout the world. Despite adding tens of thousands of new donors in the worldwide registry and helping many other people, there was still no match for Brother Feinberg. Luckily, at the very last drive, a match was found with the last donor—teenager Becky Faibisoff—ending a four-year search and his fight with cancer.

In the fall of 2004, AEPi proudly partnered with Gift of Life to help recruit young, healthy Jewish students to join the donor registry. Ten years later, the fraternity selected Gift of Life as one of the ten beneficiaries through our Official Philanthropy Program to strengthen our commitment to the Jewish ideal of Tikkun Olam – repairing the world.

“Running registry drives on college campuses is crucial as donors are between 18 and 30 more than 90 percent of the time. And because young donors are generally healthier and less likely to have medical issues that preclude them.”

So far, AEPi has sponsored more than 9,300 donors, 370 matches and 54 transplants. To continue with the partnership, all of October is AEPi Month at Gift of Life. American and Canadian chapters will be running drives throughout the month, and those who go above and beyond will be awarded prizes. Learn more about the AEPi Month.

“I am amazed and extremely proud to be a Pi because of undergraduate brothers’ creativity and ingenuity to get more people in the registry. Their efforts have direct and tangible outcomes, including facilitated matches. It’s truly wonderful to witness.”

Discover how you can get involved with Gift of Life and save a life!