As lead guitarist of the band Clubhouse, Ari Blumer was honored to perform at Firefly Music Festival this past June. Just two years ago, after forming the band with his identical twin brother, he attended the annual concert in Dover, DE.

“I remember sitting there and discussing with the band how amazing it would be to play on one of these stages in a few years.”

Their hard work paid off when they won the Firefly 2017 Big Break Global Contest.

“My brother originally found out about this opportunity for us. The first round of submissions had upwards of 3,000 bands and artists worldwide that were up for consideration.”

A Firefly committee narrowed the list down to ten groups and for ten days, each band competed to have the highest number of votes from the public. Whoever came in last each day was eliminated from the competition.

“For those ten days, we were all over social media asking anyone we knew to help us out. In the end, we were the last ones standing because of our fans and friends. It was an amazing feeling because Firefly is one of the biggest festivals in the world.”

To prepare a set list for Firefly, Clubhouse performed three shows — in Pittsburgh, Fairfax and New York City — on the road to Dover.

“When we found out we were doing the festival, we put our time and energy into writing and rehearsing until we had a set list that we were comfortable with.”

The band was stationed at Treehouse stage, which was tucked in the woods.

“It was a nice stage to play because there was a personal and intimate atmosphere to connect with the crowd.”

More than 500 people attended, marking it as one of Clubhouse’s most successful shows. 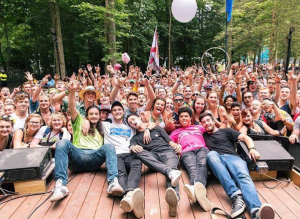 Growing up, Brother Blumer and his brother, Zak, learned to play music together. They started by learning the music of other artists, then they started jamming and writing songs together. While Brother Blumer took on the guitar, Zak found his talent with the drums. Soon after, their close friend Max Reichert became the lead vocalist, followed by Ben Saulnier on bass guitar and then Michael Berthold on keys. Brother Blumer joked,

“I have to thank my parents for being so patient with us. I’m sure we were awful while we were finding our ground.”

Bands on the radio like Blink-182 and Foo Fighter were early inspirations followed by Michael Jackson, Phil Collins and many others.

“Eventually we created our own language and sound, I classify our genre as Electronic Indie Pop. We utilize synthesizers and electronic drum sounds mixed with electric guitar and vocal effects. Some songs are dreamy and ambient while others take on a feel of EDM.”

Brother Blumer never expected to join a fraternity and eventually found an incredible support group for his music.

“I didn’t have a lot of influences in Judaism growing up, but I’ve found that AEPi has sparked a deeper interest in my culture and heritage. I didn’t know about groups like BBYO in high school, but now I see there’s so much more to learn about Judaism. I look at other fraternities and see the bond that they share just isn’t the same.”

His leadership in the Omicron Upsilon chapter flourished as he took on the position of Scribe and then Master. Whenever Clubhouse has a show in Athens, he knows he can count on a good showing of AEPi brothers in the audience.

Playing Firefly was more than exciting and a great first step into the music industry.

“With school, it’s a lot to balance. We want to work on new music and get our foot in the door. We have a long way to go until we get where to we want to be, but the best part is having a goal to work towards. Creating cutting edge music that people want to hear can be hard, but being true to our style and pushing forward is what’s most important.”

“Never give up on a goal or dream of yours just because it may seem like a far stretch. With hard work and persistence, that goal may become a little closer than you think.”

Check out Clubhouse’s music and upcoming shows at www.clubhouseband.com.