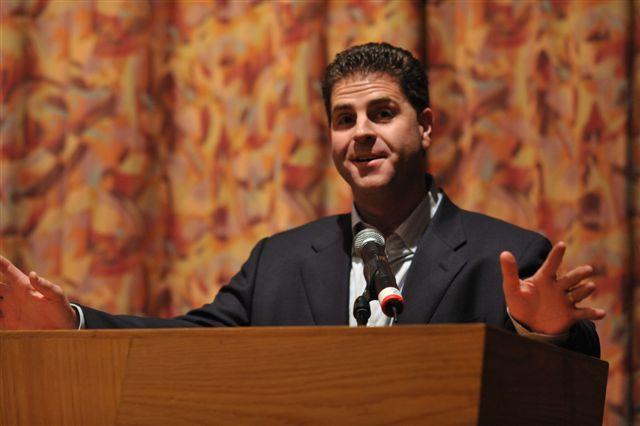 Brother Brad Cohen has never been one to take no for an answer.

“Growing up with Tourette’s Syndrome, people didn’t always believe in me and what I could do. They used their preconceived notions to stereotype what my abilities were.”

In 1996, Brother Cohen interviewed for 24 teaching positions. It wasn’t until his 25th interview — in the Cobb County school district–  that he was hired as a second-grade teacher.

“I knew I just needed to find that one principal who believed in me. I worked so hard to overcome the stigma that someone with a disability can’t be a teacher so I was ecstatic!”

His story would gain momentum after he published his book, Front of the Class, in 2005. Shortly after, Oprah and her team featured him on the Oprah Winfrey show in 2006 to show the world how he beat the odds.

“My goal was to show America that good things come to those who wait, so I went on to become a motivational speaker.”

It was during one of his speaking engagements that he met Tim Shriver, CEO of Special Olympics, who was inspired by his story. Tim pitched the book to various movie producers, where it was eventually picked up by Hallmark Hall of Fame. They made a movie to depict his life and what it was like living with Tourette’s Syndrome.

“Its release in 2008 was shown to more than 12 million people. It’s great being an ambassador for the Tourette’s community and showing people that you can overcome whatever you put your mind to.”

His movie’s success led to the start of the Brad Cohen Tourette Foundation, which helps support children diagnosed with Tourette’s.

“A lot of kids feel alone because they don’t know anyone else with the same condition. This brings kids together through social opportunities while giving parents and educators the proper education to help them understand what is happening.”

Since middle school, he always knew he wanted to go into education. His principal helped him stand in front of the entire student population and educate them about Tourette’s.

“On that day, my story took off and I realized the power of education. After getting a standing ovation, I knew I wanted to do this for the rest of my life.”

In 1996, he received his bachelor’s degree in education. During his time at Bradley, he was vice president of the interfraternity Council, pledge class president and master of the Beta Upsilon chapter as well as an undergraduate supreme governor for AEPi’s Supreme Board of Governors.

Brawny Brands recently reached out to coordinate with him on their new Amer-I-CAN pitch for the holiday.

“They were looking for a story that characterized someone who had perseverance, determination and a strong personality that reflected the values of Brawny Brands. I was honored that they thought of my story as a way to brand the product.” The company came to Atlanta to film him interacting with students at his school and then make their social media campaign.

“I never chose to have Tourette’s Syndrome. But I did choose to accept it. Once I realized this condition was a part of who I am, I was determined to follow my dreams and help others do the same. AEPi was a constant reminder that our brothers are doing great things in communities across the world and I wanted to be a part of that. Now and forever, I’m proud to be a Pi.”

Check out the Brawny Brands video of Brother Cohen here.