As a college senior, the last thing Jake Teitelbaum worried about was his health. But, after being diagnosed with Refractory Hodgkin’s Lymphoma in 2015, he knew he had to reach others and help them cope. So, he founded the Resilience Project to help others.

“Growing up, I was always told that if I ate well, exercised and took care of myself then I would be alright. The cancer diagnosis was a shock because I had made such a concerted effort to keep my body healthy.”

Though being diagnosed in the spring, he was determined to return to Wake Forest and finish his senior year in the fall. However, when his oncologist called to go over his PET scan in October, he knew something was wrong.

“Despite treatment, the lymphoma clusters in my chest were continuing to grow which meant I needed a more aggressive treatment.”

“The idea was to use everything in the toolkit to wipe out the disease. It was taxing.”

Things started to rapidly change for Brother Teitelbaum, who spent more time as an inpatient for longer infusion cycles.

“Each time you’re admitted to the hospital you’re given a welcome package of sorts — a gown and a pair of poorly made non-slip socks. The socks became a symbol of what was to come. They drove me insane.” 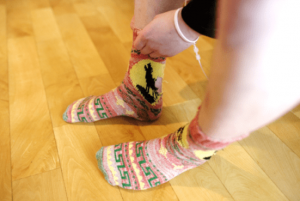 He brought his own socks to wear, socks with fun and colorful designs and patterns. It was a way for him to maintain control of a process that was mentally and physically draining.

“I remember one moment, at around day twenty of my treatment. I was twenty pounds lighter, my mind was cloudy and my body was pathetically weak. I was about to get in the shower and realized I was still wearing the most absurd pair of socks I owned. In that moment, no matter how foreign I felt in my own body, those socks helped to remind me who I was.”

Brother Teitelbaum had an amazing support system including his parents, friends and AEPi brothers. He was a member of the Alpha pledge class of the Gamma Beta colony.

“I never pegged myself as a fraternity guy, but I liked the idea of shaping an organization. There is a small, but growing Jewish community at Wake Forest and AEPi reinforces Judaism and cultural aspects of who I am.”

Some brothers drove down to see him over their spring break in Florida, and that meant a lot.

He realized that everyone was not as fortunate in getting support.

“For me, it was never about whether or not I could afford to pay for my treatment.”

It bothered him that other people had to worry about the financial strain in addition to getting well.

As Jake slowly began to recover, he reflected on his time in the hospital and he began work on resilience. His idea was to give patients an intangible way to help them mentally and emotionally.

“Socks became my thing. We put them on every day…they are so ordinary but I found something powerful about putting on this ordinary object and making it extraordinary.”

So, he began selling socks and donating the proceeds as a sustainable stream of revenue for patients struggling to cover their care. When a patient gets involved with The Resilience Project, they make their own sock design so it’s personal to them and their recovery.

“Each person’s experience with cancer is different. When you empower a patient, you allow them to maintain a sense a dignity. By improving their outlook, you really improve their ability to heal.”

The Resilience Project initially partnered with a local hospital to find patients that may be interested. Since receiving media exposure, they’ve gotten many more requests. Their efforts as an organization have been able to assist four patients, with another four currently enrolled. Designing the socks is meant to be fun and therapeutic.

“As someone who went from being a contributor in society to someone relying on others, it’s meaningful to turn the table and help others who are in the same position I was.”

After his first clean PET scan in October 2016, Brother Teitelbaum is officially cancer free. He is recovering well and earned his bachelor’s degree in business and Spanish last Monday (May 15, 2017).

“Being a young entrepreneur is hard, there are a number of challenges that I embrace. Emerson once said, ‘What lies behind us and what lies before us are tiny matters compared to what lies within us.’ Overall, I’m happy with where we are and I’m excited about our future.”

Learn more about the Resilience Project by visiting their website: https://www.resilience.gives/