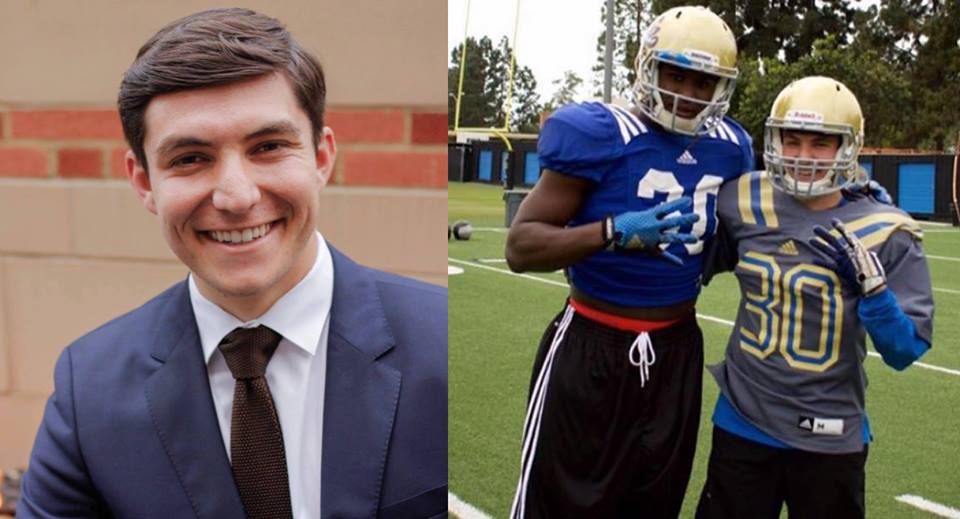 To hype up student government voting the following week, one of Brother Danny Siegel‘s (UCLA, 2017) roommates suggested in jest that he ask Myles Jack, then UCLA football player and current linebacker for the Jacksonville Jaguars, to tackle him in a video endorsement. “He may have been joking, but I saw it as an opportunity. We planned to release the video on Sunday night–thinking it might get picked up on Monday morning in the student news.”

Imagine Brother Siegel’s surprise when, like a wildfire, the video went viral overnight–getting featured on CBS Sports, FOX Sports and evenESPN. The opportunity he saw was a success, and he firmly believes the video lead to his successful run for student government general representative.

Brother Siegel also credits the win to his Xi Deuteron chapter brothers. “They worked their tails off to see me get elected. They were always my first line of defense and were extremely supportive. Looking back as a senior, it’s bittersweet to focus on myself and graduation rather than on the chapter.”

As Scribe, he expanded communication within the chapter while also strengthening Xi Deuteron’s campus presence. “Even though I came from a Jewish home, AEPi gave me the connection to my Jewish heritage and identity as an adult that I know I would not have had without the fraternity. It opened so many doors to Jewish life and pro-Israel advocacy.” While an undergraduate, he has been involved with Hillel International, Chabad.org and AIPAC – The American Israel Public Affairs Committee.

After being elected as a general representative, Brother Siegel went on to run a hard, successful race for student government president against a strong opponent. As president, Brother Siegel fought back against a Boycott, Divestment, and Sanctions (BDS) resolution that passed during his sophomore year. He worked to amend the UCLA constitution so that any proposed resolution cannot pose harm to student welfare, which ultimately voided the BDS resolution. “No one could disagree that student welfare should not be threatened. I hope it prevents BDS from coming to campus again.”

Brother Siegel will earn his bachelor’s degree in political science this semester and hopes to attend law school following a gap year. “I would love to get some experience in the private sector in the meantime. Doing so will definitely bolster my writing skills and technique in the field. I’m hoping to stay in L.A. since I already have a community of friends and family.”

“I am incredibly thankful to my family, friends and broader Jewish community at UCLA for propelling me to have the confidence and success to develop a respect for public service. They’ve helped me pave the road for a generation of student leaders long after me.”