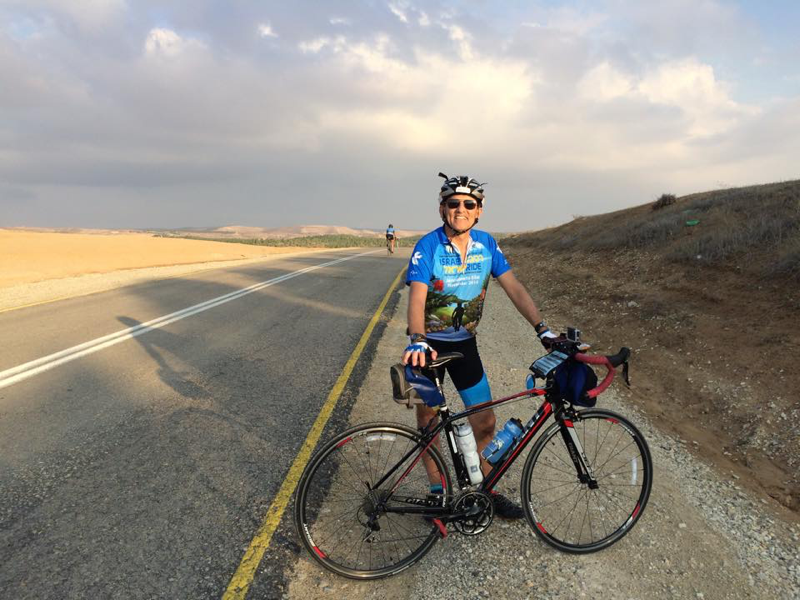 Morris L. Maslia (Georgia Tech, 1976) has developed a passion for bike riding through the Negev desert to Eilat in Israel. His first opportunity to do this was in 2014 with The Israel Ride, a seven-day cycling experience. This adventure was created to fund both the Arava Institute for Environmental Studies as well as Hazon.

The Arava Institute is an academic program that brings Israeli Jews and Arabs, Palestinians, Jordanians and North American students together using environmental study as a shared goal. Hazon works to create a healthier and more sustainable Jewish community and world for all. “In order to help students attend the Arava Institute, they provide full scholarships that cover the entire cost of tuition. I’m happy to do my part.” Each cyclist is required to raise $3,600. Brother Maslia went above and beyond—raising more than $6,000.

Riders average anywhere from 30 to 75 miles each day depending on the route option they choose. There is a two-day break for Shabbat where everyone rests at Mitzpe Ramon. “To me, it’s not just a bike ride, it’s transformative because participants meet people from various backgrounds. You can’t really explain how amazing cycling is until you’ve actually been on the Israel Ride.” Brother Maslia was team captain for the Jewish National Fund’s (JNF) Atlanta team in 2014 and 2016 and hopes to take on the role again this year. Though the trip requires both a time and financial commitment, seeing the beauty of Israel’s Negev desert and understanding the diversity of participants, students and alumni of the Arava Institute makes it all worth it.

Israel has always been an important aspect of Brother Maslia’s life. While he has lived in Atlanta for a majority of his life, he spent four years in Israel from 1958 to 1962 when his parents emigrated to live and work. Both his mother and father gave him an appreciation and love of Judaism, which he has tried to pass along to his own children. He decided to enroll at the Georgia Institute of Technology because his father graduated there. He earned his bachelor’s and master’s degree in civil engineering with an emphasis in water resources and environmental analysis.

Even as an honorary initiate of the fraternity, Maslia has taken pride in being a brother. “Of all fraternities, this one is fantastic because it supports Jewish organizations through both service and funding. There is also a strong commitment to Israel advocacy, which sets it apart.” Not only is his father an AEPi, but his son, Adam (College of Charleston, 2011) previously served as the Howard M. Lorber Director of Jewish and Leadership Programming for AEPi International Headquarters and is the current Managing Director of the Israel on Campus Coalition. This added connection of brotherhood is unlike anything Brother Maslia has ever experienced. “One of my favorite things to do is stop by the Georgia Tech house after football games with my dad because we enjoy touring it and meeting all the brothers.”

For the last 25 years, Brother Maslia has worked for the Agency for Toxic Substances and Disease Registry (ATSDR), which is a division of the U.S. Centers for Disease Control and Prevention (CDC). He specifically looks at the impact of environmental contamination on human health. As he nears retirement, he hopes to continue cycling on a more regular basis.

Since the Israel Ride has a focus on raising awareness for an environmental institute, it’s less about being a race and more about bringing students of diverse backgrounds together so they can work and learn without directly encountering the day-to-day political strife that is so ubiquitous in the Middle East. Brother Maslia’s background with the CDC and lifelong commitment to Israel has allowed him to fall in love with this opportunity.

“I remember the first time I finished the Israel Ride in November 2014. There was such an adrenaline rush dropping from about 2,500 feet above sea level, cycling through the Eilat mountains and finishing the ride at Eilat on the Red Sea. It’s quite a sight and reminds me of my favorite quote from the great scholar, Hillel: ‘If I am not for myself, who is for me? And being for my own self, what am I? And if not now, when?’”