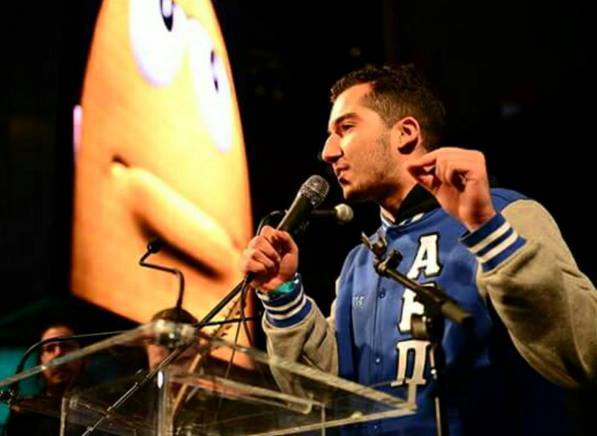 For Brother Tomer Kornfeld (Brooklyn 2017), AEPi has brought a sense of purpose, an outlet for giving back and, most importantly, family.

The son of an Israeli father of Yemenite and Polish descent, and a mother who arrived in the United States as a refugee from the former Soviet Union, Brother Kornfeld’s childhood was somewhat different than many AEPi brothers. “My parents divorced when I was young and my father eventually moved to Israel and left my mom here as a single mother of four. It was a tough time for us.”

Tomer fought back by committing himself to working hard for his community and for Israel. After graduating from Yeshivah of Flatbush High School in Brooklyn, he enrolled in college and began a series of volunteer roles, working for the Jewish community. “I was interning at the Israeli consulate in Manhattan and Prime Minister Netanyahu had come to speak at Conference of Presidents event. I ended up talking with Andy Borans and he told me that I should get involved in AEPi because we share a lot of the same commitments. That’s where this began.” He has since served the Phi Theta chapter at Brooklyn College as the philanthropy, education, and Israel engagement chair.

Brother Kornfeld has served as a Jewish education specialist at Mark’s JCH in Bensonhurst, Brookly, a predominantly Russian-Jewish camp – for a couple of years. Two summers ago, Tomer worked in Tel Yehudah, the leadership camp of Young Judaea where he worked with 16-17 year olds and helped develop their passion for Judaism and Israel He has also worked at Havurah, a camp that focuses on Russian-Jewish teens in order bring Judaism and Israel into the lives of those teens who have been separated from this aspect of their lives. Tomer also led BBYO Panim El Panim seminars, which are leadership-focused seminars and lobbying missions to Washington with his high school.
Brother Kornfeld is currently the StandWithUs New York Campus Liaison and was a member of the first ever Hillel International Student Cabinet.

Earlier this year, Tomer went to Japan along with three other brothers on a B’nai B’rith sponsored trip to meet with the Japanese foreign ministry. “We got a sense of the culture there and had a chance to stay in a home with a family for some time. I learned a lot there. You know the stereotypes but when you visit it is completely different. We had a chance to meet with foreign ministry and talk about our issues as Jews and Americans and, since I’ve returned, I can talk about Japanese culture.”

“My favorite AEPi experience, though, was when I went to my first International Convention last year. It was insane to see how widespread AEPi is. We’ve talked for a long time in our chapter about the concept of brotherhood and unity and I walked into that hotel and I immediately felt that unity, that the things that are important to me were important to them and that, with them, I had brothers.”