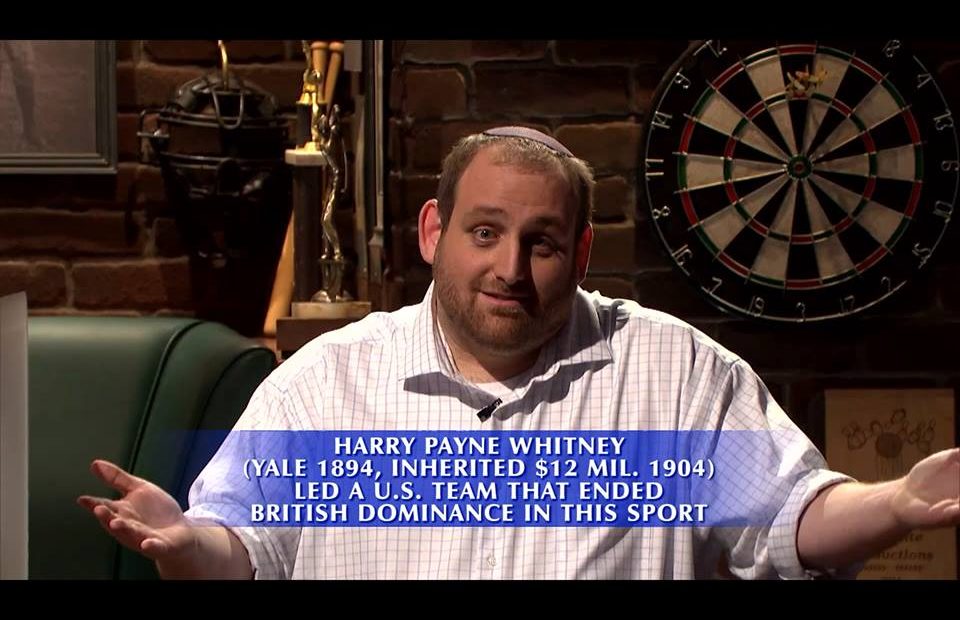 Last week, Brother Rabbi Howard Tilman (Northwestern, 2006) faced a difficult question and was able to answer it. This question, though, wasn’t about the Talmud. It was about polo.

“I’m pretty sure that the producers liked the idea of having a rabbi who knew his sports on the show on the show and I was right.” After completing an online questionnaire and attending a live audition in Atlanta, Tilman was booked on the show. Unfortunately, he lost in this week’s episode (http://www.crackle.com/sports-jeopardy) but the run was exciting for him, his family and his congregation at the Jacksonville Jewish Center in Florida. “We had more than 100 people in the congregation come out to watch the first episode and saw me come from behind on the final question to win.”

Brother Tilman was always very involved in the Jewish community in his hometown of Philadelphia, attending Jewish Day School and Camp Ramah and being involved in his local synagogue. When he got to Northwestern, he immediately became very active in AEPi’s Tau Delta chapter.

“I was majoring in communication and radio/tv broadcasting and minoring in Jewish Studies. I was heavily involved in AEPi and also announcing Northwestern’s football and basketball games.”

After graduation, Tilman moved to Los Angeles and worked for a national sports talk network for three years. “As much fun as it was talking sports and watching nine football games at once, I started to realize that it wasn’t what I wanted to do in the long run. I wanted to be more involved in the Jewish community.”

“I started to think about what would make me more fulfilled and thought about a lot of the times I had in AEPi while in college, leading the largest Seders on campus and discussing Jewish issues with my brothers and I realized that I was being pulled to the Jewish education profession.”

He enrolled in the Ziegler School for Rabbinic Studies in LA in the fall of 2009 to begin his studies and, after spending a year in Israel, was ordained in 2014. “I stayed connected to AEPi even through rabbinical school. There were several Brothers studying at the time and every once in a while, we would get together and have an AEPi Rabbi get together.”

Brother Tilman moved to Jacksonville to become the congregational Rabbi at the Jacksonville Jewish Center, where he also gets to work with the Day School and the local USY chapter.

“My best times in college revolved around AEPi and my connections with my brothers. Whether we were just sitting around talking about the fraternity, school, or Judaism or whether we playing NCAA College Football, AEPi was at the center of my college experience. But, just as memorable to me are connections that AEPi has brought me since graduation. I’ve been wearing AEPi letters in Israel and had brothers come up to me and give me the handshake and I’ve never seen anything like the AEPi delegation at AIPAC. Those memories are just as important to me now.”

And, of course, the memory of sports trivia.