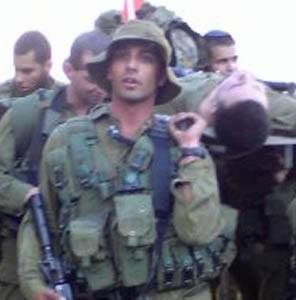 “For as long as I can remember, I have wanted to support Israel and to serve in the IDF to defend her and the Israeli people so, when I had a chance, I did just that,” said Brother Brad Legum (Albany, 2007).

“When I got to college, I joined an Israel advocacy group on campus called Tagar and then started rushing fraternities. I was pretty set on joining another fraternity but the AEPi Master, Shawn Hindes, took me aside at an event and told me that AEPi was the only Jewish fraternity that did Jewish things and he asked me to think about where I felt most comfortable. I thought about it for a while and I realized there was no other place for me. I think I shocked Shawn when I told him that I wanted to pledge AEPi.”

“The thing that I always remember about AEPi is how we came together to support the important Jewish programs and organizations on our campus. We all had a lot in common but when it came to our ‘Jewishness’ we were very different. We had a few really observant guys and some were conservative and others called themselves Jewish but had no religious affiliation. That didn’t matter, though. We all went to Shabbat dinner together at Hillel or Shabbos House (UAlbany Chabad). When there was a pro-Israel event on campus, we all went together. That’s just what AEPi does.”

Shortly before he began his last year in college, Legum had a sudden insight. “I realized that if I didn’t take this opportunity to serve in the IDF, I never would. I’d be taking the LSATs and heading to law school and I would never do it. So, I went and packed up my room, said goodbye to my family, made Aliyah and joined the army.”

Legum served two and a half years as a paratrooper in the IDF before coming back to New York and finishing his degree at UAlbany. One of his most memorable experiences during his years of service happened in his first few weeks there.

“I had just finished up some training and was sitting on a bus going to a training center to really begin my service. A lot of the soldiers on the bus were “lone” soldiers, or soldiers without family in Israel, and I was sitting next to this guy and we start talking and we discover that we’re both AEPi’s. Another guy I served with ended up going to college after the army and he joined AEPi at Santa Barbara and got elected Master. It sounds random but when you think about it, our brothers are probably more likely to be there than most”

Upon returning to New York, Legum has been working with an Israeli non-profit which helps support IDF soldiers with equipment and financial support. “Since I’ve been back in New York, I’ve been helping to raise money for Yashar LaChayal (www.yasharlachayal.org), which is a non-profit that helps bring soldiers in the Israel Defense Forces what they need when they need it. When I was in the army there were always things we could use which weren’t being provided to us like gloves, fleeces and camelbacks. This kind of ‘non-standard’ equipment is really important to the soldiers. I can tell people from my own personal experience how important it is.”