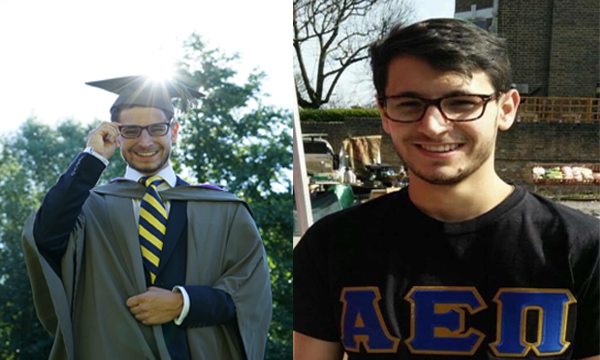 In the fall of 2014, members of the Palestinian Solidarity Society at the University of York decided to perform the 10-minute, anti-Semitic play by Caryl Churchill, Seven Jewish Children, written in response to the Israeli bombing of Gaza. Brother Zachary Confino (University of York, 2016) challenged the group by distributing pro-Israel literature following the performance and submitting a formal complaint with the university and the Student Union.

Following his complaint, Brother Confino was virtually attacked on social media – receiving messages that “maybe Hitler was onto something” and being called a “stupid Israeli twat”.

His concerns about the anti-Semitic nature of the play and the online bullying fell on deaf ears. The university and the Student Union failed to support Brother Confino and the Jewish community despite repeated meetings over two years.

After nearly two years, Brother Confino recently received a formal apology and £1,000 from the university and Student Union.

“I’m very relieved it’s all over. The whole thing has taken up so much of my time at university and negatively impacted my university experience. The people who are paid to support my peers and me have actually made my life more difficult.”

While support from his school was lacking, Brother Confino was thankful for his AEPi brothers.

“It was nice to have the supportive network of brothers in AEPi. I didn’t have to explain to them what was going on, because they understand the issues happening on campuses.”

Brother Confino recently graduated from the University of York with his law degree and accepted a job with the Union of Jewish Students (UJS) as a Jewish Society Officer, where he will travel across the country visiting Jewish students on campus. He plans to pursue a career in trust law following his work with UJS.

“We never choose issues – issues choose us. When anti-Semitism happens, we have an obligation to fight it. And my advice for those fighting: never give up.”