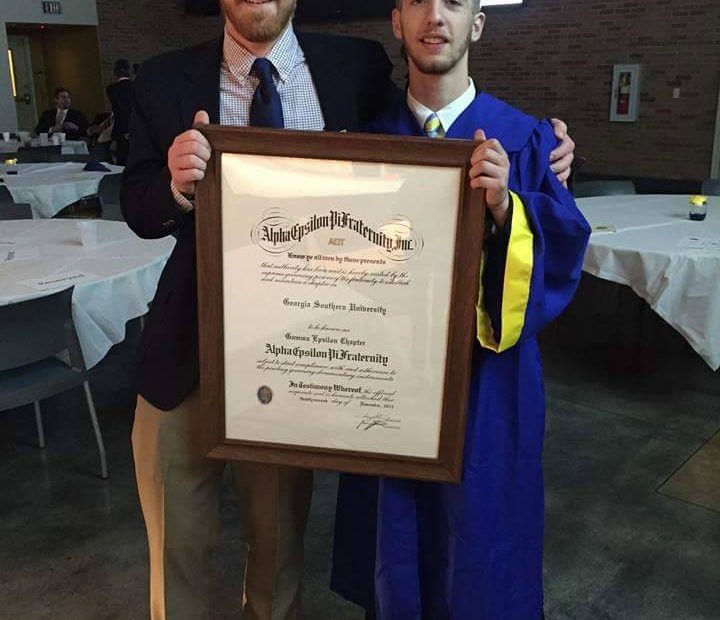 One of AEPi’s newest chapters (just chartered earlier this year) is at Georgia Southern University, located in Statesboro, Georgia. While not a hotbed of Jewish life (Hillel’s official guide says that the student body is approximately one percent Jewish), the brothers of AEPi have already begun to make their mark on the Greek system and the campus community. And, Brother Richard Spector has been a big part of that.

“I never thought I would be super active in AEPi, even as we were starting it, but I fell in love with it, became Sentinel and went to convention last year in Cleveland. After that experience, I came back to school pretty fired up and got elected Master,” said Spector, a senior from Alpharetta, Georgia who will be graduating in December.

With just 20 brothers, the chapter put on a campus-wide philanthropy event – chaired by Brother Spector – which raised more than $3,000 for the AEPi Repair the World Fund. “Our ‘Dog Days’ philanthropy helped put us on the map. We sold hot dogs for two days on campus and completely sold out. We had a Gift of Life table with us and they were swabbing people to add them to the registry which helped raise awareness for that cause, as well. At one point, we did a 24-hour challenge where we challenged the campus community to donate an additional $500 and, if they did, some of the brothers would get their heads shaved. That was an … interesting experience.”

“It’s hard to believe how far we’ve come since we were started. In just the last year, we’ve been accepted into the IFC and received our charter. It’s really incredible.”

In the spring, AEPi at Georgia Southern was named a “Five Star” chapter by the campus’ administration. The Five Star Program measures chapters’ performance in five key areas of scholarship, public relations, campus involvement and education/social programming. Of the 22 fraternities and sororities on campus, only two chapters this year were awarded five stars.

“Getting recognition like that on campus because of our philanthropy and with the University is great but my favorite moment is when I was told at convention last year that the Supreme Board had voted to give us our charter. I’ve never felt so strongly about something. I started to cry just thinking about sharing that moment with my brothers.”